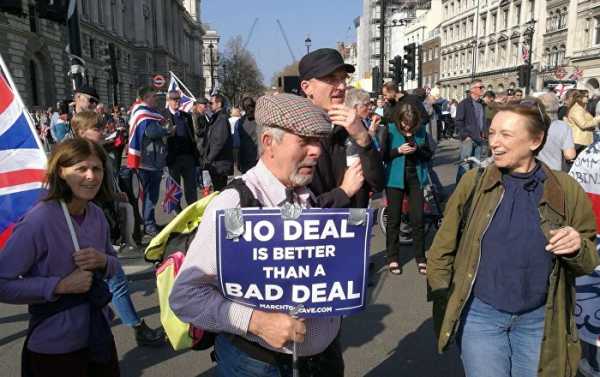 UK Prime Minister Boris Johnson has stated on numerous occasions that he is willing to pull the United Kingdom out from the European Union with or without a deal. Brussels, in turn, has repeatedly underlined its commitment to the already agreed deal with former UK PM Theresa May, which, however, was blocked by the British Parliament three times.

The United Kingdom would suffer the most from a no-deal Brexit scenario, European Commission spokeswoman Natasha Bertaud stated at a regular daily briefing on Monday. Bertaud added that the bloc, on the other hand, is fully prepared for this possibility.

Nevertheless, the spokeswoman underscored that a UK withdrawal from the EU without a deal would never be a preferable option for Brussels.

In 2016, British citizens voted to withdraw their country from the European Union. While the initial pull-out deadline was scheduled for this past March, MPs rejected the Brexit deal agreed by then-Prime Minister and Brussels, prompting Theresa May to step down from her post. The deadline was subsequently postponed to October.

Following May’s departure from her post, former Foreign Secretary Boris Johnson assumed the role, vowing to renegotiate the withdrawal deal in order to eliminate the so-called backstop clause, which specifies the status of the UK-Ireland border. He also threatened to crash the UK out of the bloc without any deal on 31 October if the EU does not meet his demands.

The EU, in its turn, stressed its unwillingness to reopen talks on the deal agreed on under May’s prime ministership.