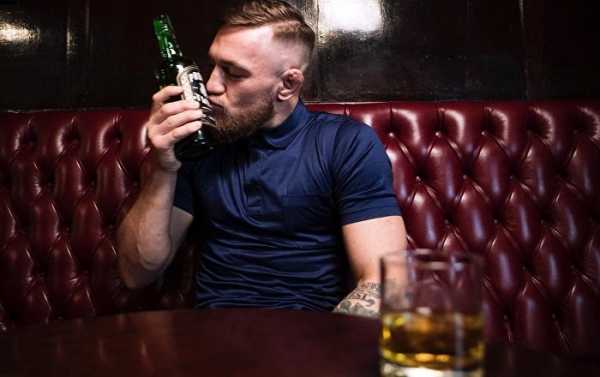 In the latest incident involving former professional fighter Conor Mcgregor, the ex-UFC champion reportedly got into a brawl with a local bargoer in Dublin, Ireland who turned down the athlete’s signature whiskey and got punched in the face for it, according to CCTV footage from the bar posted online.

A video has gone viral of Irish pub owners in the US flushing Conor McGregor’s branded whiskey Proper No. 12 down the toilet.
With Salty Shamrock owner Sean Rice leading the group, the staff at the pub in Apollo Beach, Florida, posted footage of themselves pouring their supply of the whiskey down the drain, as their response to the recent online video of McGregor allegedly punching an elderly man.

“That’s the low life there that we’ve all supported”, Rice is heard saying, as the footage shows him pointing to a framed photo of the former UFC champion atop a toilet.

“Alright guys, get that in the toilet, because that’s where his whiskey belongs right now. Get in here. Proper 12, to hell with it. It will never be sold in this bar”, says Rice.

Several of the staff then proceed to pour bottles of Proper No. 12 whiskey down the toilet.

The owner then orders them to throw the photo of McGregor in the trash, as the picture is removed from the frame and torn up.
“He’s a scumbag lowlife. Life’s too short to be associated with scumbags”, Rice says, adding:

“We are now Proper 12 free in the Salty Shamrock”.

Summing up his emotional outburst. The pub owner says:

“Well folks, that’s how I felt about a so-called Irishman punching an old man in a bar. Just disgusting behaviour”.

“On behalf of the Irish people I apologise for this cowardly scumbag. He does not represent us. Dublin and the whole country of Ireland are absolutely mortified. He has brought disgrace :(“

“Fair play to the salty shamrock they did exactly what the majority of us Irish think should be done to that scumbag let alone his whiskey flush him down the toilet!!! “

Since his defeat by Russian athlete Khabib Nurmagomedov last October, former Ultimate Fighting Championship champion Conor Mcgregor, 31, has reportedly attacked or at least attempted to attack people who have nothing to do with martial arts or sports in outbursts of anger.

The latest incident occurred on 6 April, according to Fox News, as McGregor reportedly got into a brawl with a local bargoer in Dublin, Ireland.

The ex-champion reportedly wanted to treat locals with his own branded whiskey, but one visitor seemingly rejected the offer, igniting McGregor’s temper.

The latter punched the man in the face, according to CCTV footage from the bar that was posted online.