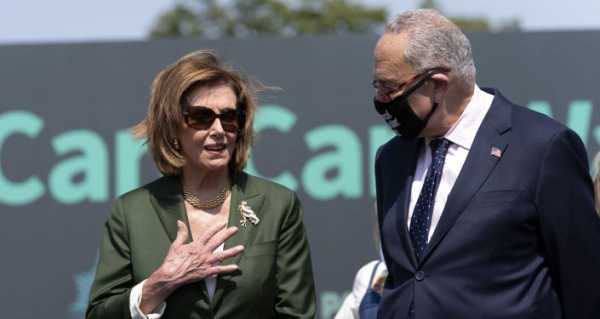 Senate Democrats and US President Joe Biden have come under increasing pressure to abolish the filibuster, a rule allowing senators to hold up legislation by talking nonstop on the floor, because of the de facto requirement for a 60-person majority to pass bills. So far, he’s said he prefers bipartisanship, even as it imperils his economic agenda.

Congressional Democrats are rushing to agree on the contents of a massive spending bill they are attempting to pass through unorthodox means before their self-imposed deadline later this month. Meanwhile, corporate lobbyists representing the country’s biggest companies are organizing their counteroffensive.

That’s why this massive agglomeration of programs, which could potentially include Medicare expansion, an extension of the child tax credit, incentives for clean energy investments, and tax increases on corporations’ foreign profits, are heaped into a single spending bill: the Democrats intend to force it through under budget reconciliation, which allows them to fast-track it protects it from a Republican filibuster.

Their go-it-alone strategy narrowly succeeded last week when the House passed a framework for the bill in a close party-line vote of 220-212. However, just nine centrist Democrats were able to gum up the works – an enduring problem when it comes to figuring out what to actually put in the bill.

US Sen. Kyrsten Sinema, a Democrat from Arizona

According to Politico, House Speaker Nancy Pelosi (D-CA) has directed the heads of relevant House committees to resolve all major disputes about content with their Senate counterparts before the week is out.

“The fact that we did a $1.2 trillion infrastructure bill with essentially very little input from the House – it was an institutional surrender to the Senate,” he said of the parallel bill that has worked its way through the Senate for months.

The Senate finally passed that bill in mid-August. Progressive House Democrats have promised they’ll only support the $3.5 trillion bill if it’s voted on at the same time as the infrastructure bill, which is scheduled for September 27 – one week after lawmakers return to Washington.

Meanwhile, another force is seeking to undermine the entire bill: corporate lobbyists.

In addition to “traditional lobbying,” the report says the trade groups are rolling out what Business Roundtable told the paper would be “a significant, multifaceted campaign” to stop tax hikes and would “continue to ramp up our efforts in the coming weeks.”

U.S. Senate Majority Leader Chuck Schumer (D-NY) departs the Senate at lunchtime, after morning remarks on the a $1 trillion bipartisan infrastructure bill at the U.S. Capitol in Washington, U.S. August 9, 2021.

In a statement following the House’s approval of the framework last week, the US Chamber of Commerce pledged to “do everything we can to prevent this tax raising, job-killing reconciliation bill from becoming law.” Ironically, in the same statement, it hailed the $1.2 trillion infrastructure bill as something every member of Congress should support.

Other industries are levying their own seven-figure ad campaigns aimed at swaying public opinion against the bill, including comparing drug pricing proposals to socialism, claiming increased taxation would make the US more like China and hurt its global competitiveness, and that various parts of the bill would have made the COVID-19 pandemic worse.