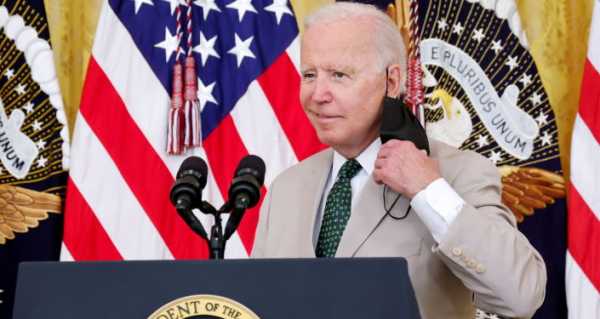 The Biden administration is struggling to take back control of the narrative on the Afghanistan pull-out, The Hill reported on Wednesday, referring to the increasing number of public appearances of President Joe Biden and other White House officials in the last several days.

The Hill noted that as of 24 August, Biden had delivered a whopping three speeches in five days on the evacuation efforts and twice took questions from reporters, as his Cabinet is seeking to fix the damage of the botched evacuation. White House press briefings also restarted this week, with spokeswoman Jen Psaki taking questions on Monday after her notable absence from 15 August to 22 August.

These efforts come in sharp contrast with the president’s unsettling silence when the Taliban* took over Kabul, prompting a hasty evacuation of the embassy staff and outright panic at Kabul Airport.

Two days after the fall of Kabul, President Biden appeared in the White House East Room “scrambling to defend himself from a series of miscalculations that have damaged US credibility”, as Reuters remarked on 17 August. Having delivered his message, Biden “retreated” to Camp David without taking any questions. This prompted a new wave of negative press both from his domestic and foreign allies as well as the American political opposition.

The Republicans and former President Donald Trump have pulled no punches while lambasting the Biden administration for the botched withdrawal. Earlier this week the ex-president released a new “Surrenderer-in-Chief” commercial slamming Biden for his domestic and foreign policies.

Apparently caught off guard by the Taliban’s sweeping advance, Biden administration officials also failed to prepare the public for the current state of affairs, according to The Hill. Biden’s approval ratings have slipped to the lowest point of his presidency. The latest RealClearPolitics average shows Biden’s approval rating at 46.6 percent, while his average disapproval rating stands at 48.9 percent. Meanwhile, a Suffolk University survey presents a gloomier picture, with the president’s rating plummeting as low as 41 percent.

Under these circumstances the White House has gone into “damage control mode”: first, it adopted a special television strategy; second, it aggressively defended its handling of the unfolding crisis; third, it subjected the media criticism over the Afghanistan withdrawal to condemnation.

U.S. President Joe Biden speaks about Hurricane Henri and the evacuation of Afghanistan in the Roosevelt Room of the White House in Washington, D.C., U.S. August 22, 2021.

The media outlet highlighted that, for instance, National Security Adviser Jake Sullivan has been the White House’s “most trusted messenger”: he appeared on NBC’s “Today”, ABC’s “Good Morning America”, NBC’s “Nightly News”, and CBS’ “Evening News” last week. Yet another “go-to emissary” was Jon Finer, who had not appeared much on television until now. It even created some confusion, as one television channel misspelled his name as “John”.

​At the same time, the White House tried not to turn much spotlight on Defence Secretary Lloyd Austin or Chairman of the Joint Chiefs of Staff Mark Milley, although journalists specifically sought their assessment of the Afghan events. Vice President Kamala Harris has abstained from commenting on the chaotic pull-out.

The White House’s “carefully orchestrated television strategy” included the president himself, according to Politico: last week, Biden did a few lengthy interviews on Afghanistan, and when he did, it was “often with familiar faces like columnist David Brooks or ABC’s George Stephanopoulos”.

​On 20 August, the US president answered some questions after days of criticism for not talking to the press after his public remarks on Afghanistan. However, these were questions from reporters on a pre-selected list, namely, the Associated Press, Bloomberg, PBS, ABC News, and NPR, according to Politico. Others were “left shouting questions at the president’s back”, the media outlet noted.

General view of the crowds of people near the airport in Kabul, Afghanistan August 23, 2021
‘The Best Run Evacuation Ever’

In addition to that, the Biden administration has focused on the “positive” side of the withdrawal: according to the State Department, the numbers of evacuees have increased dramatically as the 31 August deadline nears.

“You make adjustments and you ultimately get an operation going that is moving out thousands, if not tens of thousands, of people daily. That is what we have accomplished over the course of the week”, Jake Sullivan told a White House briefing on Monday.

​Senior administration officials have also been dispatched to appear on leading cable news and tout the withdrawal effort, while “the entire White House press shop” has started to tweet out the latest updates on evacuation totals and hailing the progress made on the ground in a series of “coordinated messages”, according to The Hill.

Hundreds of people gather near a U.S. Air Force C-17 transport plane at a perimeter at the international airport in Kabul, Afghanistan, Monday, Aug. 16, 2021.
‘Blame Lies With Media Coverage’

Being incapable of undoing last week’s mess at Kabul Airport, the White House and its Democratic allies opted to scold the press over the negative coverage. The Hill quoted Eric Schultz, a spokesman under President Obama, who insisted that the media criticism of the withdrawal has been unfairly tough.

For his part, White House Chief of Staff Ron Klain has shared a series of posts criticising the media for taking on the president and his Afghan pull-out.

​Yet another post shared by the White House chief of staff and authored by journalist Ryan Grim says: “The US has rapidly evacuated 70,700 in 10 days. Now assume we started that when the MSM says they wanted us to, with the Afghan government still in power. Within days of the signal of our retreat, they’d have fled and collapsed. Result would be chaos. Chaos was unavoidable“.

Still, it remains unclear whether Team Biden’s damage control efforts will translate into improved poll numbers for the president.