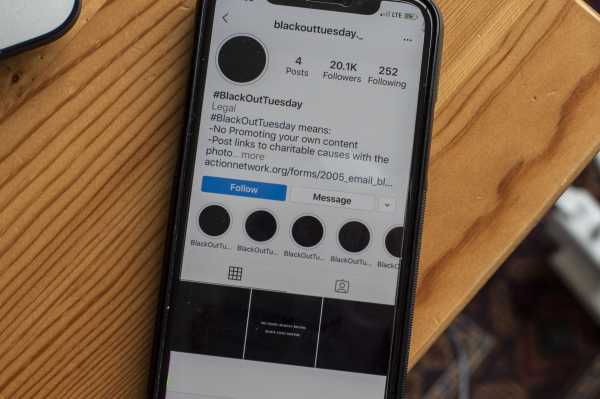 An effort to raise awareness about police brutality and systemic racism, which started in the music industry before being co-opted by countless Instagram users, appears to be backfiring somewhat.

The “Blackout Tuesday” campaign began as a push for a day of reflection from music artists and labels in the wake of the police killing of George Floyd, an unarmed black man, in Minneapolis last Monday. But almost immediately after the campaign started, countless Instagram users uploaded solid black squares in solidarity and added a #BlackLivesMatter hashtag. That meant the new Blackout Tuesday posts showed up as rows and rows of black squares on the Instagram page for #BlackLivesMatter. Many offered little to no context or information about the movement or demonstrations.

Activists are now criticizing Blackout Tuesday posts that use the #BlackLivesMatter hashtag for being not just unhelpful but also counterproductive for those looking for critical information and resources related to anti-police brutality demonstrations.

Still, the effort altogether seemed to have a significant impact, especially in the music industry. Companies including Spotify, Apple, and TikTok announced they would suspend much of their regular work Tuesday amid the demonstrations.

“Tuesday, June 2 is meant to intentionally disrupt the work week,” explains the website for #TheShowMustBePaused. “It is a day to take a beat for an honest, reflective, and productive conversation about what actions we need to collectively take to support the Black community.”

In addition to including a statement, the website clearly explains what companies and members of the music industry could do during their downtime on Tuesday. There are links to donate to various bail funds, to the Official George Floyd Memorial Fund, and to the family of Ahmaud Arbery, who was killed by two white men while jogging. There’s also a link to a petition in support of justice for Breonna Taylor, a first responder who was shot and killed by police while sleeping in her own bed, as well as to the Movement for Black Lives website.

While the music industry’s response was not completely uniform, the industry’s initial support for the effort quickly spread to the mainstream. As of early Tuesday afternoon, #TheShowMustBePaused had appeared on more than half a million posts on Instagram. However, while record labels issued image-based statements — often just white text on a black background — lots of Instagram and Twitter users simply uploaded plain black images and added the campaign’s hashtag. Some also added or used the #BlackLivesMatter hashtag, which led to objections from organizers that Black Lives Matter content was being pushed aside by the plain black squares.

So many of these plain black square posts included #BlackLivesMatter hashtags that when users searched #BlackLivesMatter on Instagram, some could only see row after row of black squares. That meant that other posts, including information about protests or fundraising efforts, were getting drowned out by the trend. Complaints about the issue started early Tuesday morning. Here’s Black Lives Matter activist Kenidra Woods:

By midday Tuesday, the organizers behind #TheShowMustBePaused posted an update on Twitter urging people to not use the #BlackLivesMatter hashtag unless it was to share important information or resources. They asked people to “type out Black Lives Matter with no hashtag, so we do not inadvertently mute vital dialogue in a sea of black boxes.”

Some social media users are encouraging people who posted the black squares to delete or edit their posts to remove the hashtag. “If you edit your post to remove a hashtag, your post will no longer be shown on that hashtag page,” Seine Kim, a spokesperson for Facebook, Instagram’s parent company, told Recode. “In some cases, it may take up to 10 minutes for the post to be removed once you edit the post.”

But again, the criticism over those participating in Blackout Tuesday extends beyond the problem of people posting black squares on Instagram and obscuring Black Lives Matter content. Other social media users argue that, regardless of the hashtag, just posting a black square and then logging off gives both brands and nonblack people a way of signaling support on social media without providing any real help.

Others have pointed out that Tuesday is not a great day to go offline, since that’s when primary elections are happening in nine states and Washington, DC. Instead of posting a black square and the hashtag, activists have urged people to consider donating to bail funds and other nonprofit efforts focused on fighting police brutality and helping protesters. If you’re going to a demonstration, Vox has written a guide for how to do so more safely in the pandemic.

The PPP worked how it was supposed to. That’s the problem.