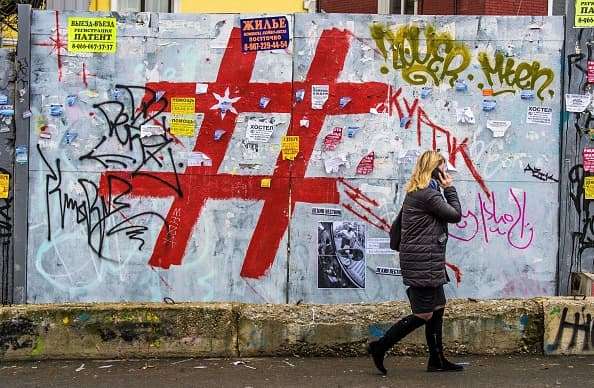 “Social media has transformed the way that wars are waged, covered, and consumed.”

David Patrikarakos, a London-based author and journalist, begins his book War in 140 Characters with this claim. Though wars are still fought on the battlefield, they are increasingly shaped by competing narratives on social media, he argues.

In this interview, we discuss the role of online propaganda in today’s wars, how social media is enabling everyday citizens to take on powerful governments, and why the internet has failed to set us free.

Can you sum up the argument of your book?

The information revolution has given ordinary people enhanced powers to create change their circumstances, and this is especially true of conflict. The world is shaped more and more by information, and the ability to create and distribute information is more dispersed than it’s ever been. That has had an enormous impact on war.

Can you give me an example of an empowered individual who influenced the course of events in a way that wasn’t possible 20 or 30 years ago?

Take the case of [the British citizen journalist and blogger] Eliot Higgins. Here’s a guy who was an obsessive World of Warcraft player. A guy, for all intents and purposes, you would’ve considered an online nerd. He spent hours and hours and hours playing online role-playing games with people in other parts of the world.

He took these skills — his obsessive nature, his ability to marshal different people online — and [began using social media to investigate the downing of Malaysia Airlines Flight 17]. And he eventually proved that Russia had supplied the weapon, the missile, that shot down Flight MH17.

Twenty years ago, this would’ve been laughable. Or they could have just ignored it. So that is a huge shift.

So how is this changing the nature of war itself?

ISIS is a classic example. As its physical caliphate has diminished, its virtual caliphate has grown. As it ceases to be an army on the ground, more importance is placed on being a franchise and getting people to carry out attacks in its name, to keep it in the global consciousness.

Our perceptions of reality have always been shaped by narratives, but social media has opened up a whole new battleground of competing narratives, which leaves us in a weird and unstable place.

No question. Social media was sold to us as this information utopia, this network that was transnational but would bring us all together. In many ways this is true — if you and I are friends on Facebook and I’m in London and you’re in New York or DC, we can hop on Messenger and chat instantly with each other. And that brings people together.

But social media also cocoons us: It self-organizes us into groups of like-minded believers who share the same views, the same beliefs, the same prejudices. And they post articles. Most people now, especially young people, get their news from social media. So people aren’t going directly to the news sources; they’re getting cherry-picked answers.

This is what makes it such a powerful tool of propaganda and exploitation. In wartime, it yet again reinforces your worldview. And when this happens, when you’re on this social media platform and all your friends are sharing largely similar stuff, a compromise with people of opposing views becomes harder. The ability to even understand an opposing view becomes harder. Because with everything you’re reading, not only are the opposing views wrong, it’s mendacious, it’s evil, it’s a lie.

So what matters most now is how well and how completely one side can advance a narrative that supports the version of reality they want people to believe.

Twenty years ago, everyone watched CNN or BBC or whatever and drew their own conclusions from it. Unless they were on the ground themselves, people were seeing the same footage, the same reality, produced by media organizations with professional journalists.

But this is not the world we inhabit anymore. People construct their own realities now, and they live in echo chambers that confirm their preexisting prejudices. Social media has made this possible, and it’s both new and dangerous.

But state actors are exploiting these platforms as well, and they have the means and resources to exploit it even better than citizens or networks of citizens can.

Absolutely. The ones that are smart about this are taking full advantage of these tools. Russia, as you know, is way ahead of everybody on this front. There was this utopian idea that the internet would set us free, and to a degree it has. But in the end, governments will always fire back.

If both sides of a war can successfully communicate whatever version of reality they want, it’s hard to see how most wars could ever end.

It’s tough. When war becomes politics, when does it end? Because politics never end. Obviously, there’s a point at which there has to be some acknowledgement of the realities, but where is that line? I don’t know. People seem quite able and happy to live in parallel universes. My honest feeling is that it’s going to get a lot worse before it gets any better, if it gets better at all.