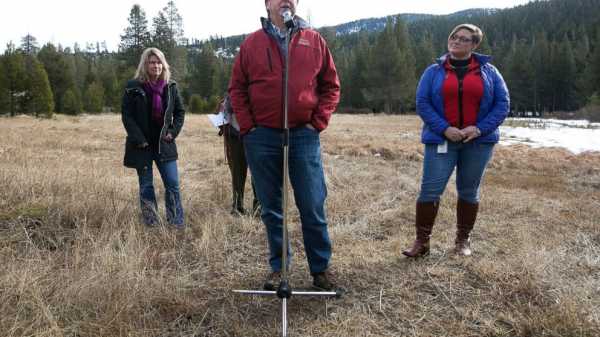 The Latest on drought conditions in California (all times local):

California may be in a growing drought, but the idea of more rain scares Southern Californians who lived through recent mudslides.

Cayla Stretz, a hostess working at a Santa Barbara beach restaurant, said Thursday she knows California needs rain. But Stretz says another mudslide like January’s would be awful.

A national drought monitor now shows Santa Barbara, Ventura and Los Angeles counties have fallen back into a severe drought and 44 percent of the state is in a moderate drought.

The area’s first significant rain in months spurred mudslides last month that killed 21 people in Southern California. Tourism business is down and some people are still digging out their homes.

Stretz says part of her feels safer with the current forecast of 70s and 80s and no rain.

A U.S. agency says more of California is rapidly plunging back into drought, with severe conditions now existing in Santa Barbara, Ventura and Los Angeles counties — home to one-fourth of the state’s population.

The weekly report released Thursday by the U.S. Drought Monitor also shows 44 percent of the state is now considered to be in a moderate drought.

It’s a dramatic jump from just last week, when the figure was 13 percent.

A drought state of emergency was lifted in California less than a year ago. A rainy winter snapped a deep five-year drought that forced water conservation.

Amid record-setting heat in the state’s south, California’s water managers will measure the Sierra Nevada snowpack, which supplies water to millions.

Department of Water Resources officials will trek to the mountains Thursday to check the snow depth, one gauge of the state’s water supply. Electronic sensors show snow levels are about one-third of normal.

Heavy rains in Northern California last year finally snapped the drought, and Brown declared the emergency over in April.

But the drought never really seemed to end in some Southern California areas, said Daniel Swain, a climate scientist with the University of California, Los Angeles.

Los Angeles received only one significant rain in almost the last 12 months.

In Ventura and Santa Barbara counties, which are about 100 miles (161 kilometers) north of Los Angeles, the lack of rain and dry vegetation were perfect fuel for a December wildfire that grew to be the largest recorded in state history. When it finally rained, the scorched earth turned into deadly mudslides.

The most recent weekly U.S. drought monitor, a product of the federal government and others, shows only small patches of the state, in Southern California, in the mildest form of drought. That compares to 2014 and 2015, some of the driest years in history in California, when much of the state was rated as in the most severe categories of drought.

In the middle of the state’s winter rain and snow season, no rain is in the forecast. In Southern California, “it really is pretty grim,” said Swain, who has tracked the stubborn weather patterns blocking rain from the state’s south for years.

Doug Carlson, spokesman for the state’s Department of Water Resources, which carries out the snowpack surveys, said the dry weather is a growing concern, although reservoirs are still fuller than usual thanks to last year’s rain in Northern California.

Considerations of what constitutes a drought vary, and include: rainfall, the state of waterways, soil dryness, and other measures. Any decision to declare a new drought emergency if the winter remains dry, or later, would be up to Brown.