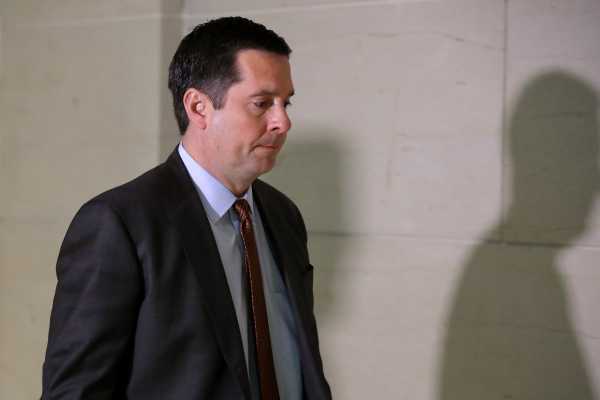 First reported by Fox News, the complaint seems to be part of a plan almost destined to backfire spectacularly in the public eye: one of the more combative and well-known figures in Congress (particularly for his defenses of President Donald Trump) deciding to sue a notoriously free-wheeling social media platform, two parody Twitter accounts, and a Republican operative who uses it frequently for $250 million over tweets like these. 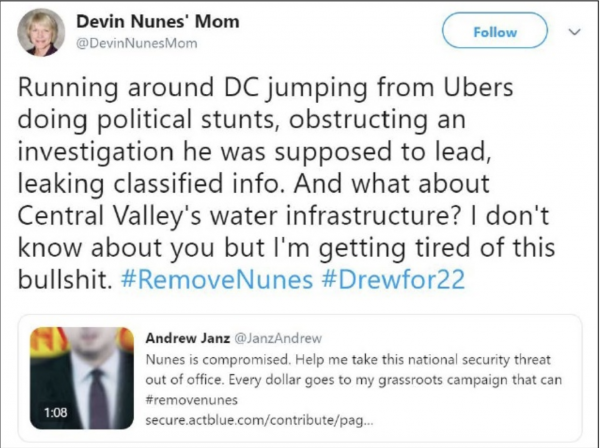 But Nunes said in an interview with Fox News host Sean Hannity that rather than being an example of excessive litigiousness, his complaint is intended to be “the first of many” such lawsuits against social media platforms. He argued that Twitter is the “main proliferator” of “slanderous” news and even added that he considered his lawsuit part of the Russia investigation.

Watch the latest video at foxnews.com

Nunes’s complaint might never get to the judgment phase and will most likely not result in a $250 million payout for Nunes and his actual, not-a-fake-Twitter-account mother. But that’s not the point. To the California Republican and his allies, social media platforms have been far too unfair to conservative and right-leaning users. And now, Nunes argues, it’s time to fight back — in court.

The complaint, and the inevitable (hilarious) backlash

A member of Congress since January 2003, Nunes is perhaps best known nationally first for his involvement in the Benghazi investigation and second for his dogged defense of Donald Trump, upon whose transition team Nunes served. It was Nunes, for example, who wrote the 2018 memo on wiretapping that many Trump supporters believed would permanently damage special counsel Robert Mueller’s investigation into Trump’s 2016 campaign. (It didn’t.)

So it stands to reason that Twitter users less enthralled with Trump would tweet things about Nunes that were perhaps less than cordial — like calling him a “presidential fluffer and swamp rat,” for instance. (In fact, a tweet using those very words was included in the lawsuit.)

But in the 40-page complaint filed on Monday, Nunes argues that tweets like that and the two parody Twitter accounts were not merely examples of Twitter being Twitter. Rather, he argues that the social media platform served as “a portal of defamation” by permitting parody accounts of his mother and his imaginary bovine to exist on the platform. Moreover, he says that the purpose of those parody accounts was to “influence the outcome of the 2018 Congressional election and to intimidate [him] and interfere with his important investigation of corruption by the Clinton campaign and alleged Russian involvement in the 2016 Presidential Election.”

In his claims against Liz Mair, the Republican strategist also targeted in the complaint, Nunes argues that Mair “harbored spite, ill-will, actual malice, and a demonstrated desire to injure Nunes’ good name and reputation” by, for example, publicly referencing a winery partly owned by Nunes that is now enmeshed in legal problems, and by referring to Nunes as “Dirty Devin” on Twitter.

He also says that Mair and the two parody accounts (whose owners he also demands to know the names of in the suit) were working together to “defame” him and hinder his work as a Congress member.

In the complaint, Nunes even argues that the “defamation” hindered his 2018 reelection campaign, which he won but by narrower margins than in previous years. (He does not note that his congressional seat was a top target for Democrats, which is a more likely reason for the narrow margin of victory than three Twitter accounts, one of which only had 1,700 followers at the time the complaint was filed.) 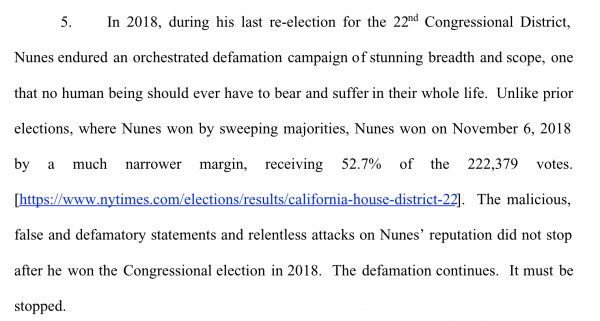 Mair did not respond to a request for comment but did say in an automated email that she has not yet fully reviewed “the legal documentation in question and therefore am declining comment.” On Twitter, she said in response to the complaint that “as a libertarian Republican,” she believes in the power of the First Amendment.

The response to the complaint (and Nunes’s choice of attorney) on Twitter, the platform upon which Nunes has centered his ire, was less than complimentary, even from conservatives. Gabriel Malor, an attorney and occasional contributor to conservative publications the Federalist and the Washington Examiner, said Nunes’s complaint was “exactly what [he’d] expect a ding dong like Devin Nunes to do.”

And Jim Swift, a senior editor at the Bulwark, noted that during the 115th Congress, Nunes was a sponsor on a bill meant to discourage frivolous lawsuits (named, appropriately, the Discouraging Frivolous Lawsuits Act).

This lawsuit is playing to two audiences — the courts, and the right

But the question isn’t necessarily “Is Nunes’s lawsuit shambolic,” but “What does Nunes hope to achieve with his shambolic lawsuit?” So I spoke with Mark Tushnet, a First Amendment professor at Harvard Law School.

After going through the complaint, Tushnet said that Nunes’s only real legal claim against Mair is for libel — a written statement that is harmful to someone else’s reputation. And because Nunes is a public figure, the standard for libel is higher. As Tushnet said, “[Nunes] has to show that the defendants made false statements of fact either knowing that they were false or with reckless disregard of their truth or falsity.”

And that means that many of the specific allegations against the two parody accounts and Mair aren’t relevant to the court’s ultimate decision, as they were obviously satirical. And referencing the lawsuit against the winery Nunes part owns isn’t a problem, either — Tushnet told me that “there’s generally a privilege of “fair reporting” of public proceedings, so that statements referring to allegations made in lawsuits can’t be libelous.”

However, Tushnet said that the lawsuit could still move toward the discovery phase, during which Twitter and Mair might be forced to hand over internal documents and emails to Nunes’s legal team. “There’s probably enough in the complaint to proceed with discovery on whether Mair was hired to, and did, distribute some specific factual statements (not opinions, parodies, or fair reports) that she knew to be false.”

Mair shared two of those potentially libelous statements on Twitter: “Nunes leaked text messages between a lobbyist and Senator Mark Warner to Fox News” and “voted for warrantless wiretapping and unlimited surveillance of Americans’ emails (incl Carter Page’s).” Both of these statements refer back to specific news stories and are unlikely to get Nunes a $250 million judgment in court. But the legal wrangling that the suit will force Mair and Twitter into could potentially be very expensive.

And then there’s Nunes’s real goal: As I’ve written before, many people on the right believe that social media platforms like Twitter and Facebook are biased against conservatives and should be regulated by the government into being fairer. (There’s limited evidence this is the case, but politically, it’s an extremely effective message).

For example, just this week Trump tweeted about the “silencing” of White House director of social media Dan Scavino, whose Facebook account was flagged because he posted the same content over and over again (which Facebook read as spam.)

So Nunes’s complaint is part and parcel with wider efforts to clamp down on Twitter itself. In short, Nunes argues in his lawsuit that Twitter is a content creator and thus Section 230 of the Communications Decency Act (which states that Twitter doesn’t have to determine what’s defamatory and what’s not and basically prevents a massive speech crackdown) shouldn’t apply to the social media giant.

In effect, Nunes wants to force Twitter into regulating speech that is mean to Nunes and other conservatives. And as Jeet Heer wrote at Talking Points Memo on Tuesday, just the expense of fighting a lawsuit like this one can be incredibly damaging, let alone any resulting ruling.

So yes, Nunes is drawing more attention to @Devincow. But he’s also sending a message: Some conservatives do in fact want more regulations stemming from the federal government, provided those regulations are aimed squarely at so-called “left-leaning” social media platforms. And Twitter, Liz Mair, and two parody Twitter account owners may have to fight back in court.