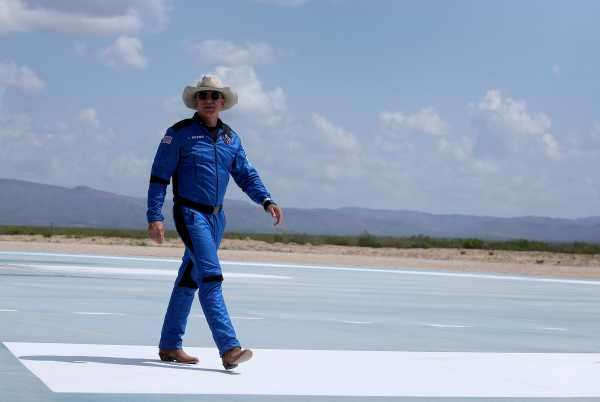 Jeff Bezos is donating $1 billion of his $10 billion climate philanthropy pledge to protect biodiversity and carbon-saving forests in the Andes, the Congo Basin, and the tropical Pacific Ocean. After nearly three decades leading Amazon, which has a vast and growing carbon footprint, Bezos seems intent on forging a new identity as an environmentalist and perhaps the world’s most generous financier in the fight against climate change. And that expensive trip to space he just took? Bezos says it was enlightening.

“Nature is our life support system and it’s fragile,” the billionaire said Monday at a press conference. “I was reminded of this just this July when I went into space with Blue Origin. I’d heard that seeing the Earth from space changes one’s point of view of the world, but I was not prepared for just how much that would be true.”

While the fundraising effort is certainly notable, Bezos’s commitment to protecting the environment serves as a stark reminder that much of his legacy and largely untaxed fortune was built by companies that have staggering carbon footprints. Amazon’s carbon emissions have grown every year since 2018, and last year alone, when global carbon emissions fell roughly 7 percent, Amazon’s carbon emissions grew 19 percent to 60.64 million metric tons of carbon dioxide. That’s roughly equivalent to burning 140 million barrels of oil.

Amazon has moved to reduce its dependence on fossil fuels, like committing to electrifying its delivery vehicles, and it has recruited dozens of companies to sign its Climate Pledge, a corporate commitment to reach net-zero emissions by 2040. But for now, Amazon remains reliant on massive fleets of polluting delivery vehicles, wasteful packaging, and even a new fleet of jet-fuel-powered planes to keep speedily delivering stuff to impatient online shoppers.

Meanwhile, Amazon Web Services (AWS) uses massive amounts of energy to keep its servers online. In 2019, Greenpeace accused the cloud computing company of abandoning its pledge to use 100 percent renewable energy and said that some of the largest AWS data centers used just 12 percent renewable energy. Amazon disputes these allegations. “To the contrary, Amazon is proud to be the world’s largest corporate purchaser of renewable energy,” the company told Recode. “We are on a path to power 100% of our business with renewable energy by 2025—five years ahead of our original target of 2030.” And even as other companies, like Google, have moved away from offering some cloud services to fossil fuel companies, AWS still lists Shell, Hess, and BP as customers.

Bezos is technically no longer part of Amazon. But Blue Origin, the private spaceflight company he owns that recently took him to space, has raised environmental concerns. While the space rocket company has used carbon-free fuels — namely, a combination of liquid hydrogen and oxygen — making these fuels is still environmentally costly, and environmentalists warn that Blue Origin rockets still leave behind particles that can harm the atmosphere.

So when seen from a certain perspective, Bezos’s environmental philanthropy feels a bit like an effort to clean up a mess his companies helped make.

We have a request

In moments like this — as people grapple to understand variants and vaccines, and kids head back to school — many outlets take their paywalls down. Vox’s content is always free, in part because of financial support from our readers. We’ve been covering the Covid-19 pandemic for more than a year and a half. From the beginning, our goal was to bring clarity to chaos. To empower people with the information they needed to stay safe. And we’re not stopping.

To our delight, you, our readers, helped us hit our goal of adding 2,500 financial contributions in September in just 9 days. So we’re setting a new goal: to add 4,500 contributions by the end of the month. Reader support helps keep our coverage free, and is a critical part of sustaining our resource-intensive work. Will you help us reach our goal by making a contribution to Vox with as little as $3?

Deadline looms for western states to cut Colorado River use