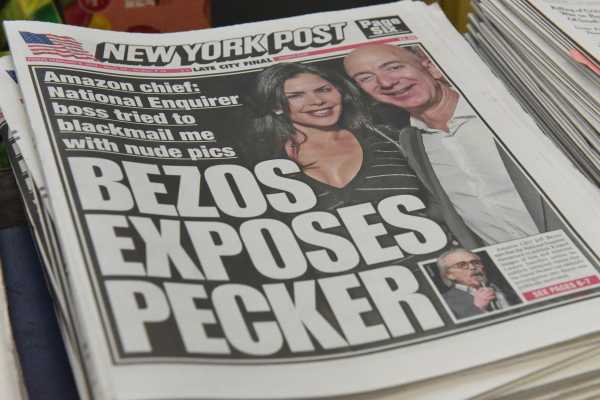 Jeff Bezos, the founder of Amazon and the richest man in the world, just publicly admitted that he sent nude selfies to his girlfriend. But detailed descriptions of his sexts were probably the least scandalous part of a blog post he published on Thursday. Because in 2019, if someone is sending nudes to a partner, who really cares?

Of course, when Bezos said in a blog post on Thursday that the National Enquirer’s parent company was trying to extort him by threatening to publish the selfies, his announcement was momentous for many reasons. He accused the company, AMI, which has ties to President Donald Trump, of engaging in “blackmail, political favors, political attacks, and corruption.” His allegations could complicate a non-prosecution agreement the company has with federal prosecutors relating to a payment AMI made to Karen McDougal, who said she had an affair with Trump. AMI said on Friday that it would investigate his allegations.

All this has important implications for Trump, AMI, and the process by which powerful people in America can keep information about them hidden. Up against all that, the fact that Bezos and girlfriend Lauren Sanchez appear to have sent racy pictures to one another is not especially meaningful.

Bezos’s post comes at a time when leaks of nude selfies have become commonplace for celebrities. No one wants to have private pictures made public, but it’s increasingly acknowledged that sending naked photos to a partner is a relatively normal thing to do. Bezos’s case is complicated by the fact that he was married at the time, but sources close to him have said he separated from his wife before he began seeing Sanchez. Whatever the case, the release of nude photos would certainly be embarrassing for him — but hardly damning.

In fact, by publishing emails from the National Enquirer’s owner that included detailed descriptions of the photos, Bezos may actually have won this particular news cycle, standing up to an apparent bully and revealing evidence of what he says is a “well-known practice” of blackmail by AMI. In fact, journalist Ronan Farrow has said he was also the victim of attempted blackmail by the company. For now at least, Bezos is controlling the narrative around his dealings with AMI — and the naked pictures of him have become one of the least consequential parts of the story.

Bezos says AMI threatened to publish his selfies. So he published descriptions of them.

The battle between Bezos and AMI began last month, when the National Enquirer published a story alleging that the Amazon CEO was cheating on his wife, MacKenzie Bezos, with Sanchez, a former TV anchor. The magazine published what it said were texts between the two, including one from Bezos that said, “I love you, alive girl. I will show you with my body, and my lips and my eyes, very soon.”

Around the same time, the Bezoses announced they were divorcing, though a source close to the couple told Vox that they had separated before Bezos began seeing Sanchez.

After the Enquirer story ran, Bezos wrote in his blog post Thursday, he launched an investigation into how the Enquirer obtained the texts and why they decided to publish them. He pointed out AMI’s role in “the so-called ‘Catch and Kill’ process on behalf of President Trump and his election campaign” — AMI paid $150,000 to Karen McDougal as part of an agreement to keep her from speaking publicly about an affair she says she had with Trump.

According to Bezos, AMI chief David Pecker became “apoplectic” over the investigation. As Peter Kafka explained at Vox, “Bezos says that AMI executives didn’t like the suggestion — floated in the Bezos-owned Washington Post, among other media outlets — that the Enquirer had run the story because of a longstanding relationship it had with Donald Trump, who has made a point of attacking Bezos, the Post, and Amazon.”

Bezos wrote that AMI executives demanded that he issue a statement saying that he had “no knowledge or basis for suggesting that AMI’s coverage was politically motivated or influenced by political forces.” If he didn’t, Bezos said, they threatened to release 10 selfies sent between him and Sanchez.

Instead of complying, Bezos published what he said were email exchanges with AMI executives, including detailed descriptions of all the selfies. One is a “below the belt selfie — otherwise colloquially known as a ‘d*ck pick,’” according to the emails. Another is “a full-length body selfie of Mr. Bezos wearing just a pair of tight black boxer-briefs or trunks, with his phone in his left hand — while wearing his wedding ring. “

“Of course I don’t want personal photos published,” Bezos writes. However, he says, “Any personal embarrassment AMI could cause me takes a back seat because there’s a much more important matter involved here. If in my position I can’t stand up to this kind of extortion, how many people can?”

Indeed, Bezos ultimately has little to lose by publishing details about the selfies. Certainly, he would probably prefer that the public not know about his “d*ck pick” [sic] — especially since he was apparently still married when it was sent.

Meanwhile, nude photos of celebrities have become public as a result of hacks in the past — in 2014, hackers posted nude or semi-nude photos of dozens of actresses online, including Jennifer Lawrence and Kirsten Dunst. And in 2017, the singer Sia released a nude picture of herself when someone tried to sell it.

Hacks of nude photos are an invasion of privacy — as Kelsey McKinney wrote at Vox after the 2014 hacking, “this is about women being shamed, and objectified, and treated like property.” They have also led to a larger conversation around such photos. “Texting nude photos is increasingly part of the sexual repertoire,” wrote Kashmir Hill at Forbes at the time; “phones have become sex toys.”

Jeff Bezos isn’t Jennifer Lawrence, of course, and in American culture, women are still shamed for their bodies and sexuality in a way men aren’t. Bezos may have had less to lose than a similarly high-profile woman by admitting to his selfies — and, certainly, the fact that they have not actually been published for the world to see matters.

Still, there’s an increasing acknowledgment that people take naked photos of themselves and send them to others. Sending such pictures unsolicited is a form of harassment; when teenagers send them, it raises additional questions of safety and legality. But when two adults in a relationship send nude or semi-nude photos back and forth, increasingly, that’s just normal.

Bezos’s publication of descriptions of his selfies might complicate his divorce proceedings. It might be unsettling for anyone who doesn’t especially want to think about the Amazon CEO in boxers. But ultimately, Bezos had relatively little to lose by admitting that he participated in a practice that the majority of American adults have also engaged in. And by calling out AMI and its ties to Trump in the process, he may have had something to gain.