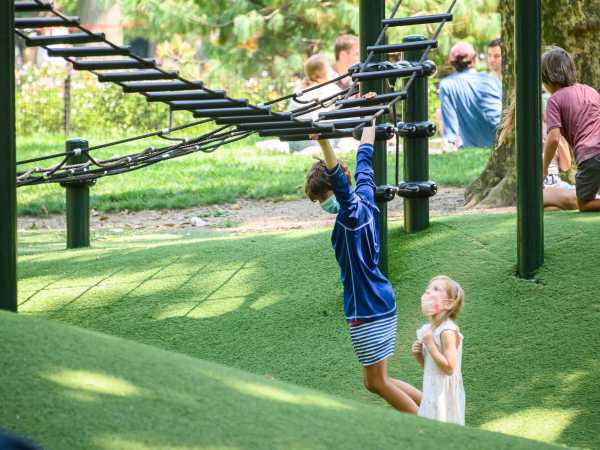 Billionaire philanthropy is once again on the defense in San Francisco, the home of many a tech billionaire.

The latest backlash centers on a city proposal to get 20,000 schoolchildren some in-person teaching and playtime this summer, after city public schools have been closed for more than a year during the pandemic. But a liberal lawmaker has temporarily derailed the initiative to raise questions about the involvement of a volunteer group that she worries is pushing a political agenda.

The saga is another flashpoint in the debate over the proper role of billionaire philanthropists — and their affiliated nonprofits — in society. And it is a window into how the city that is home to tech wealth is increasingly suspicious of civic projects from those tech leaders. Late last year, San Francisco officially condemned Facebook founder Mark Zuckerberg for his errors at Facebook after he and his wife, Priscilla Chan, donated $75 million to a local hospital.

Here’s what happened: Earlier this month, San Francisco announced that a foundation called Crankstart, funded by famous Sequoia venture capitalist Mike Moritz and his wife, Harriet Heyman, was donating $25 million to help start a city initiative to offer free summer school or day care programs to kids. The program would be aided by an outside advocacy group called TogetherSF that was formed last year to work on civic projects in the city and has also, separately, been funded by Crankstart. Crankstart brokered the arrangement between TogetherSF and the summer school program.

But TogetherSF’s involvement has become controversial — and is being cast by one San Francisco supervisor, Hillary Ronen, as a possible political play by education reformers. And Ronen this week convinced the board, on a 10-1 vote, to delay approving the program to educate San Francisco students until she could investigate TogetherSF and its political ties.

Ronen is suspicious in part because Together SF is not a typical nonprofit organization that is a 501(c)3 group, but is instead organized as part of a bigger lobbying or advocacy organization, a 501(c)4. The group is also co-led by a former aide to multiple San Francisco lawmakers. And Ronen believes that the group may have loyalties to activists who push for school privatization and charters schools, which are lightning rod issues in urban education policy.

Ronen conceded she didn’t have any hard proof of ties from Crankstart or TogetherSF’s ties to the education reform movement, but said based on its 501(c)4 structure and her limited research, it “looks and smells like” they are seeking to promote a “political agenda.” She is concerned, for instance, that the group could seek to use the volunteers it recruits for future political campaigns in support of anti-union candidates.

“There has to be, in my book, unprecedented transparency and agreement that funders of this initiative are doing so because they’re very concerned about children — and aren’t trying to advance some alternative privatization, charter agenda that is meant to dismantle our public schools,” Ronen told Recode.

Together SF’s founders, Kanishka Cheng and Griffin Gaffney, say their work is non-political and that they merely are seeking to mobilize a network of volunteers to serve their hometown in crisis. They are helping the city with work like collecting donations from private employers and creating a website for the program.

“We’re incredibly surprised by it, honestly. This is the first we’re hearing about this privatization, charter agenda come up as a reason to question the program and our involvement,” Cheng told Recode. “It’s not at all what Together SF has been involved in.”

For now, Ronen has just delayed the vote on the program by two weeks. She told Recode she doesn’t expect it to jeopardize the summer program, but that she was open to voting against it if her investigation revealed new information. But regardless of the final vote, some observers are concerned that the conflict — along with the high-profile Zuckerberg censure in the spring — could dissuade more and more wealthy philanthropists from donating money if it only brings them more scrutiny. The city is also about to embark on a $2 billion fundraising drive, also led by Ronen, when it will need more money from wealthy people.

Moritz, a former board member of Google, and his wife Heyman, an award-winning novelist, have long made local causes a focus of Crankstart, which has a private profile but is one of the Bay Area’s biggest foundations by total assets at almost $2 billion. Crankstart has donated over $50 million to San Francisco nonprofits in 2020, funding efforts during the pandemic that paid San Francisco essential workers to quarantine if sick and local efforts to feed the hungry.

Moritz told Recode that he was trying to help local schoolchildren “and nothing beyond that.”

“All we want to do is to help people who don’t necessarily have a great, wonderful ticket for a great education to get that ticket. That’s all,” he said. “Does it pass the litmus test of is this good for San Francisco, or for a portion of San Francisco? I think the answer is yes.”

Moritz is technically the funder of TogetherSF’s parent company, Civic Action Labs, which runs TogetherSF and a second organization that has also faced tough questions about its political ties. That organization is Here / Say Media, a new media publication focused on San Francisco news that has drawn raised eyebrows from journalism ethicists because it is owned by the 501(c)4 parent company. Almost all nonprofit newsrooms are traditionally structured as 501(c)3 groups rather than as “dark money” political groups, as 501(c)4 organizations are sometimes called.

What unites these two stories is that Here/Say Media, which is also run by Cheng and Gaffney, originally declined to disclose its donors — and that troubled media observers. But then on March 9th — the day before the city of San Francisco announced the involvement of Cheng and Gaffney in the summer program — Here/Say quietly updated its website to disclose that Crankstart was a funder.

“We knew the [summer] program was launching. We’d be more visible. So we wanted to be more transparent about that,” Cheng said when asked about the timing.

Cheng and Gaffney are trying to unwind the intertwined controversies; They are in the process of trying to turn Together SF into a new 501(c)3 organization, which will theoretically reduce suspicions about their political agenda. They said that they will also spin out Here / Say Media into a new, to-be-determined, non-political structure, too.

But political critics of San Francisco government — which is managing several concurrent crises, including one involving its school board over racist tweets — are concerned that the damage has already been done. And that philanthropists will find other things to fund with their billions rather than a city that makes their life difficult.

Asked if this brinkmanship sent a bad message to private philanthropists who want to get involved in city life, Moritz said “actions speak much louder than words.”

“We live in a bit of a political cauldron, and so you know it’s just part of life,” Moritz said. “It certainly won’t deter us if people who don’t even know us, people we’ve never even talked to, ascribe various motives to us.”

Ronen, though, insists it is merely about transparency.

“If their investments is free and clear, and don’t involve a political agenda — fantastic, that’s very generous and wonderful,” Ronen said. “But if they involve an agenda, no thanks. We don’t want your investment. You have enough power as it is.”