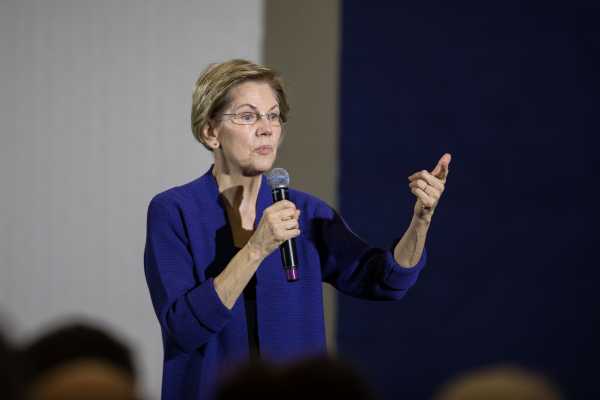 With a new plan out Tuesday, Sen. Elizabeth Warren is returning to her roots — proposing to roll back bankruptcy changes made in 2005 while also pitching a series of new reforms. The plan reflects both her longtime vision of how bankruptcy should work and her more recent focus on the idea that rich people have rigged the system for their benefit.

Warren’s transition from academic expert to politician was driven by her work over years as an opponent of bankruptcy reform legislation — legislation that researchers believe exacerbated the Great Recession by inducing more foreclosures – that eventually passed over her objections in 2005. Her interests have broadened out over the past 15 years to the point where most people following the 2020 presidential campaign might not even realize this was both her original area of scholarly expertise and motivation for taking on a larger role as an advocate and, eventually, a politician.

It’s a plan from a former law professor on the federal bankruptcy code, so there are a lot of details, and not necessarily a catchy slogan. But the big picture is easy enough to understand.

In 2005, federal law was changed to make it harder for middle-class families to discharge debts in bankruptcy. That was good for credit card companies and others that want to collect those debts, and was said by its proponents to have the secondary consequence of making cheap credit easier to obtain (in practice, credit card interest rates went up rather than down so this rationale seems dubious anyway).

Warren wants to shift the pendulum back in the other direction and make it easier for middle-class families who’ve gotten into financial trouble to gain relief through bankruptcy.

Warren doesn’t much mind if the consequence of this reform is lenders get less aggressive about pushing people into loans. At the same time, she wants to crack down on a number of strategies very rich people use to shelter assets, strategies that, because of effective lobbying, were preserved in the 2005 reform.

For much of Western history, the only way out from under crushing debt was debtors’ prison, where you’d be coerced into working off what you owed. This came to be seen as both inhumane and an ineffective way for creditors to actually recoup their money.

Under the modern system, if you’re in over your head in debt, you can file paperwork in bankruptcy court that shields you temporarily from your creditors. You end up needing to at least partially pay some of them back, but you emerge less indebted and able to move on with your life — albeit probably as someone who will have a harder time getting loans in the future.

The existence of these bankruptcy processes naturally makes lending a bit riskier than it otherwise would be. But they serve as a kind of insurance process to help deal with strokes of bad luck. The current system also creates incentives for consumers to borrow and lenders to lend. Consumers can seek loans whenever one would be convenient rather than merely in worst-case scenarios.

In other words, access to bankruptcy not only benefits specific debtors, it boosts the overall economy by encouraging a robust financial system and ensuring that people who fail or experience bad luck can move on with their lives.

In most cases, the bankrupt individual’s hard assets are worth much less than their debts so it ends up being more favorable to file under Chapter 7. Over the course of the 1980s and 1990s, more and more people were filing for bankruptcy, often under Chapter 7. Because of this, the main thrust of the 2005 reform was to try to clamp down on the steady growth of bankruptcy filings by pushing more people into Chapter 13.

Warren’s core idea is to replace the Chapter 7 and 13 distinction with a single path to personal bankruptcy. She wants to make the filing process relatively streamlined — you disclose all your assets, debts, and income to the courts — to save people the arduous paperwork and often costly legal fees associated with the current system.

Then, according to her Medium post outlining the plan, filers would “choose from a menu of options for addressing their debts.”

In one option, you surrender all your property (with a few specific exemptions laid out in law) to your creditors and in exchange you walk away free and clear of all your debts.

Alternatively, there would be options for declaring bankruptcy on some debts (a home mortgage, for example) while simply committing to remain current on your other payments.

Last, a debtor would have the option of filing a proposed payment plan to discharge debts without surrendering assets, and then petition the court to accept that plan, halting collections to the extent needed to execute it.

This menu of options would be both faster and more user-friendly than the current system. It’s also much more generous in its treatment of people who may have racked up large debts without acquiring comparably large assets.

Under Warren’s plan, the debtor in either case would have a clear path to becoming debt-free; the same isn’t currently true because of how those structuring the 2005 reform saw both repayment and the accumulation of debt.

One of the big goals of the 2005 reform was to make it harder for people in that second scenario to wriggle out of debt. And from that priority arose the key question of how to characterize the impacted population — at the time (and now) Warren argued factors like medical emergencies and a threadbare social safety net were what led to overwhelming personal debt and bankruptcy. Lawmakers on the other side of the issue and their industry allies, however, saw irresponsible consumer behavior as the main issue.

Rather than simply roll back the 2005 changes and restore easy access to the Chapter 7 process, Warren now proposes creating a new unified process because she’s putting forth a bunch of other pro-debtor reforms.

Warren’s main idea is paired with a potpourri of tweaks to the existing rule:

Mortgage modification became a big deal during the 2008-’09 recession when many families in financial distress found themselves owing more on their home mortgages than their houses were currently worth. There was widespread political discussion on possible avenues for the federal government to create relief for so-called underwater homeowners. But they mostly didn’t happen, with Obama administration officials offering a variety of at-times-inconsistent explanations for why.

Under Warren’s plan, “if a foreclosure has started, and the homeowner certifies that she has attempted to negotiate a modification in good faith, she could seek an automatic modification of the mortgage debt to the market value of the property, with interest rates reduced to achieve a sustainable debt-to-income ratio.” In other words, the face value of the mortgage would be marked down to what the house is actually worth, with an interest rate then set at a level the borrower can afford.

Warren would very partially offset this set of debtor-friendly changes with a crackdown on the “millionaires loophole” that rich people use to shelter assets from bankruptcy by placing assets in trusts that name themselves as the beneficiary. This would lead creditors to recoup more from the wealthiest debtors, even as they have a harder time collecting from the middle class.

A clash — and a vision

Bankruptcy reform is not a top-tier issue for anyone voting in 2020, but it plays a potentially important role in the campaign. While most of the members of Congress who backed the 2005 reform were Republicans, one of its main sponsors was a Delaware senator by the name of Joe Biden.

This is an issue that Biden and Warren clashed over for years while he was a senator and she was a professor. And significantly, Barack Obama was also a senator at the time the bill passed, and he didn’t vote for it. That makes the issue not just biographically significant to Warren, but a thematically useful wedge to separate the national frontrunner from the popular former president whose name he often wields as a shield against criticism.

The bankruptcy issue is also an important ideological lens for understanding Warren.

After all, the downside to adopting debtor-friendly bankruptcy rules is they may make lenders more reluctant to lend people money. To Warren, though, that’s fine.

Beginning as a researcher into bankruptcy, Warren eventually developed a larger theory of middle-class financial fragility and wage stagnation. Almost every cause she champions — from subsidized child care to Medicare-for-all to her sweeping anti-corruption proposals — can be understood as one of two things: either trying to offer a solution to the problems mid-aughts America was using cheap debt as a patch for, or else as a reaction to her perception that Congress was all too ready to brush aside expert recommendations and change bankruptcy law in ways that benefited banks.