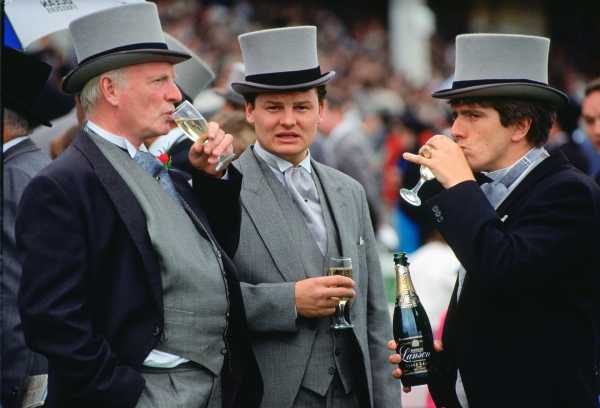 Here’s a wild statistic: The 26 richest people on earth in 2018 had the same net worth as the poorest half of the world’s population, some 3.8 billion people.

That statistic, which comes from the charity group Oxfam, is a bit of an annual tradition. Every year, to mark the World Economic Forum in Davos, Switzerland — that yearly convocation of the world’s richest and most self-important plutocrats — Oxfam puts out a statement that “the top [X] people have the same amount of wealth as the bottom” half, as the Center for Global Development’s Maya Forstater and Vijaya Ramachandran once generalized it. In 2018, X was equal to 26, and as it does every year, the stat went viral.

This year, Oxfam’s report added another shocking stat. The report also claims that 2,200 billionaires worldwide saw their wealth grow by 12 percent (which is eminently believable), even as the poorest half saw its wealth fall by 11 percent (which is a bit harder to believe at a time when global poverty is consistently falling).

Oxfam’s “the top X people have the same wealth as the bottom half” claim has received plenty of scrutiny in the past from folks like Forstater and Ramachandran, Felix Salmon, Chris Giles, and Vox’s Ezra Klein. Critics note that the Oxfam data includes heavily indebted people in the rich world (like a medical resident with med school debt) as among the poorest people on Earth, which distorts the results. Oxfam for its part has responded forcefully to the criticism. But the claim that the poorest people in the world have seen their wealth fall has gotten less scrutiny.

In both cases, it’s worth understanding a little better what the Oxfam data does and does not say, as well as reviewing other data on the state of global inequality. Oxfam is absolutely right that the rich are getting much richer — but the world’s poorest people are getting richer too.

Wealth inequality is harder to measure than income inequality for a simple reason: A lot of people have negative wealth. In rich countries, it’s fairly common for people to have negative net worth when their student loans, credit card debt, underwater mortgages, and the like are taken into account. (Income can be negative too, of course — businesses that post losses have negative income, for instance — but it’s not as common.)

So in the Credit Suisse Global Wealth Report — which Oxfam uses as its primary data source on the bottom half’s wealth — one observes a strange phenomenon: The bottom 10 percent of the global wealth distribution contains a bunch of North Americans and Europeans, whereas the next 10 percent contains barely any: 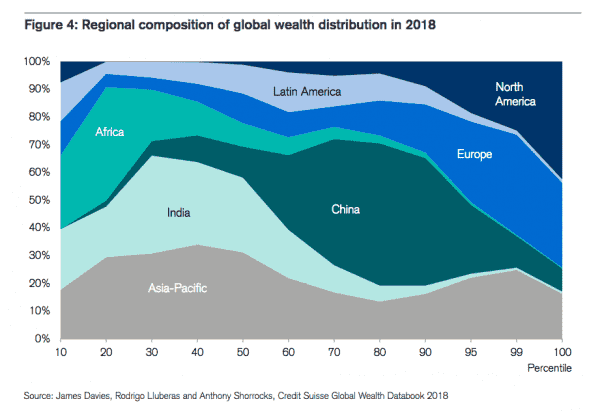 That’s because Americans with massive medical school debt, or tens of thousands in credit card debt, or (to use the president as an example) tons of debt from failed hotel, casino, and airline businesses wind up in the bottom decile. Some of those people — like the person in credit card debt — might be legitimately struggling. But Donald Trump was not, in any sense relevant to living standards, one of the poorest people on earth when his net worth went negative in the 1990s. You have to be very rich to get that poor.

And sure enough, in 2015, Oxfam’s Nick Galasso conceded that the database they use included 158 million Americans and Europeans in the bottom decile that year.

Galasso offered two defenses for using the data in this way:

Those are both fair defenses, I think. It’s not true that the bottom decile is just fake-poor people in the rich world, and it’s true that global wealth inequality is massive.

But as the Center for Global Development’s Forstater and Ramachandran noted, Oxfam’s defense smuggles in something interesting: The richest 147 billionaires in the world control about 1 percent of global wealth. That’s way, way more than the 0.000002 percent of the world’s population they represent, but it’s not the case that a small handful of billionaires control most of the world’s wealth.

What does appear to be true is that a small (in global perspective) number of millionaires control a shocking share of the world’s wealth, as this graphic from the Credit Suisse report illustrates: 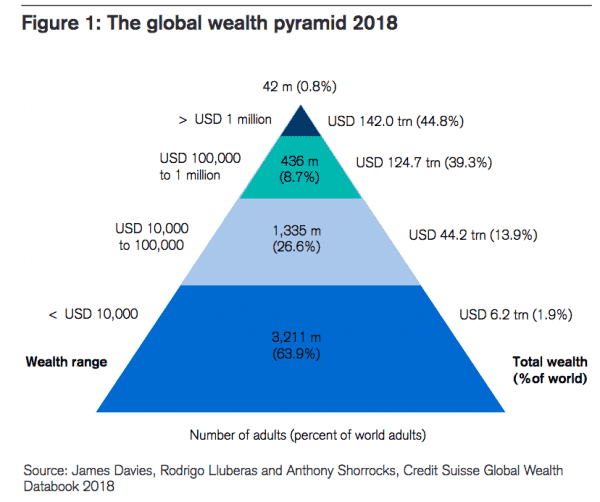 The falling wealth of the bottom half

The more shocking part of the latest Oxfam report, to me, was the contention that the bottom half’s wealth fell by 11 percent, whereas a few thousand billionaires saw their wealth increase by 12 percent.

The latter isn’t too surprising — billionaire net worths tend to be bound up in individual companies’ stocks and are thus incredibly volatile; Jeff Bezos alone gained $24 billion in 2018 — but the idea that the bottom half’s wealth fell by 11 percent seemed odd to me. It seemed curious to some development economists on Twitter, too:

Laura Rusu, Oxfam’s policy and campaign media manager in DC, told me that the group isn’t sure why they observed such a large fall in the bottom half’s net worth. “We don’t have an explanation,” she says. “We’ve been grappling with that. We have hypotheses.”

I’m not entirely sure either, but I have an alternative hypothesis. The Credit Suisse report, upon which Oxfam relies, relies not on purchasing power parity (PPP) — a statistical tool that economists use in comparing currencies when what matters is how much stuff the currency can actually buy — but on exchange rates, which fluctuate often on a global market. The latest Credit Suisse report also does some calculations using smoothed exchange rates, which reduces volatility, but nonetheless prefers exchange rates to PPP throughout.

When the Financial Times’s Chris Giles looked into a similar claim Oxfam made in 2016, he concluded that this exchange rate methodology accounted for the claimed fall in wealth of the bottom half of the distribution. When the US dollar becomes more valuable relative to domestic currencies, this shows up as a wealth decline even when there hasn’t been a decline in living standards.

And sure enough, in 2018 the US dollar appreciated against the Nigerian naira, against the South African rand, and against the Indian rupee; given how populous those countries alone are, and how poor their populations are, it seems very possible that currency appreciation accounts for much or all of the decline. That’s especially true given that the Credit Suisse report came out in October, before the dollar hit a bunch of setbacks.

I’ve reached out to Credit Suisse’s research team to see how much the bottom half’s wealth would have changed absent any currency fluctuations; I’ll update when I hear back.

Oxfam’s Rusu defended the use of exchange rate data rather than PPP, noting, “In the vast majority of countries, but especially in developing and emerging countries, a large proportion of personal wealth is in the hands of the wealthiest among the wealthy; that is, in households located in the first percentiles of the distribution. These individuals tend to have great international mobility and tend to move their assets across borders frequently.” In that context, what matters is their international purchasing power, and measuring that in actual dollar values makes sense.

But this defense doesn’t really hold when analyzing the bottom half of the wealth distribution, or considering why the bottom half’s wealth might have fallen according to the Credit Suisse data.

It’s worth stepping back from the specifics of the Oxfam numbers to try to answer the bigger claim that the Oxfam statistics gesture toward: Are the rich getting richer as the poor get poorer?

The short answer is that the rich are definitely getting way richer — and it’s a problem — but it’s nonetheless also true that the world’s poorest people are getting less poor. You can see the latter phenomenon in a variety of statistics, not least the World Bank’s estimates of how many people live on less than $1.90 a day. This data is based on household surveys, which take years to collect, so it’s out of date at any given time, but economic growth in India, China, and even sub-Saharan African suggests that the progress continued through to the present day: 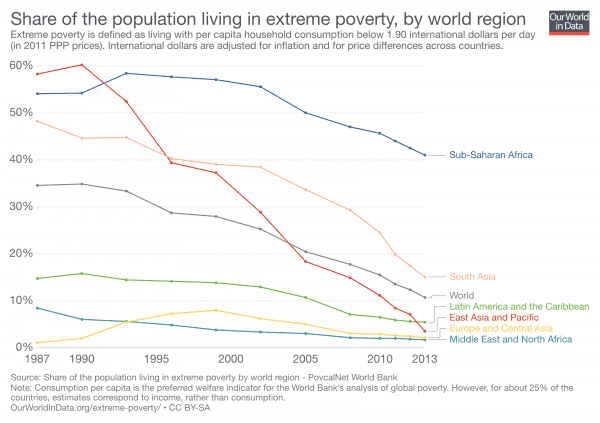 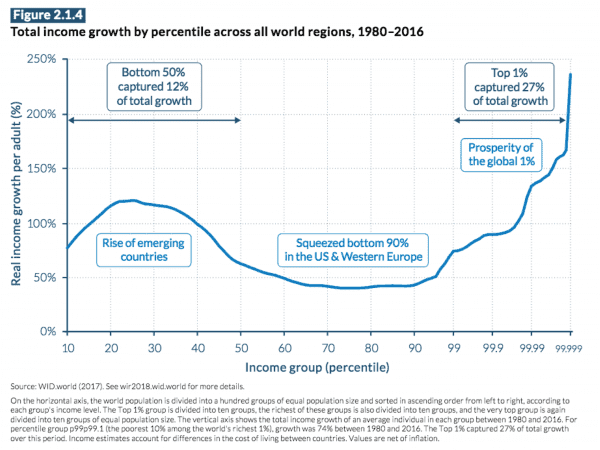 The chart shows how each percentile of the global income distribution saw its incomes increase from 1980 to 2016. There’s a bulge at the left, with people in poor emerging market economies seeing their incomes rise by 100 to 125 percent over those 36 years, modest income growth in the middle (including the poor and middle class in the US and Western Europe), and then skyrocketing growth for the global 1 percent, and especially the global 0.001 percent and global 0.0001 percent.

In other words, what you think is happening is happening: The rich really are getting preposterously rich. And there’s a real argument to be made — the political argument that Oxfam’s statistic is meant to make — that making taxes more progressive and directing the funds to, say, cash payments to poor households would lead to faster poverty reduction than has occurred under the current system. One analysis suggests that up to 50 percent of global extreme poverty could be ended if developing countries adopted higher top tax rates.

But the rich getting richer doesn’t preclude the poor getting richer too, and while the middle classes in the US and Europe have seen less income growth than either the poorest people in developing countries or the richest people on earth, the world’s progress against extreme poverty is real and notable. It’s also, I’d argued, unhelpfully obscured by stats like Oxfam’s.