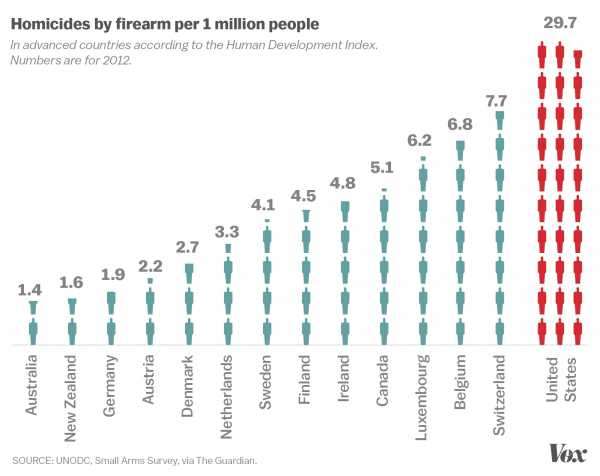 This chart, compiled using 2012 United Nations data collected by Simon Rogers for the Guardian, shows that America far and away leads other developed countries when it comes to gun-related homicides. Why? Extensive reviews of the research, compiled by the Harvard School of Public Health’s Injury Control Research Center, suggest the answer is pretty simple: The US is an outlier on gun violence because it has way more guns than other developed nations.

2) America has more guns than people 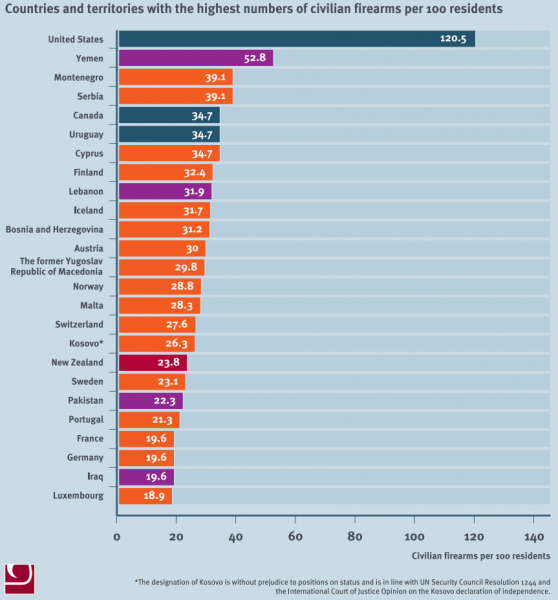 Another way of looking at that: Americans make up less than 5 percent of the world’s population, yet they own roughly 45 percent of all the world’s privately held firearms, based on 2018 data from the Small Arms Survey.

3) There have been more than 2,500 mass shootings since Sandy Hook 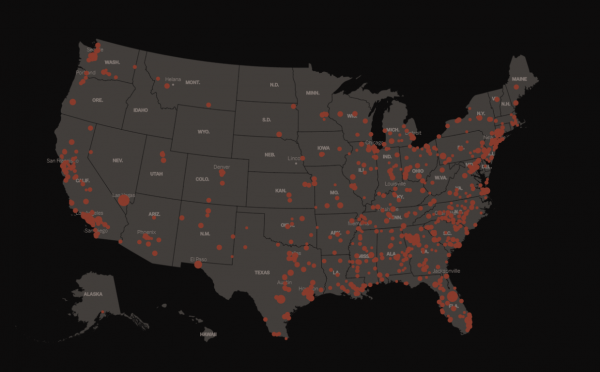 In December 2012, a gunman walked into Sandy Hook Elementary School in Newtown, Connecticut, and killed 20 children, six adults, and himself. Since then, there have been more than 2,500 mass shootings as of July 2020.

The number comes from the Gun Violence Archive, which hosts a database that has tracked mass shootings since 2013. But since some shootings go unreported, the database is likely missing some, as well as the details of some of the events.

Even under this broad definition, it’s worth noting that mass shootings make up less than 2 percent of America’s firearm deaths, which totaled nearly 40,000 in 2017 alone.

4) On average, there is around one mass shooting for each day in America 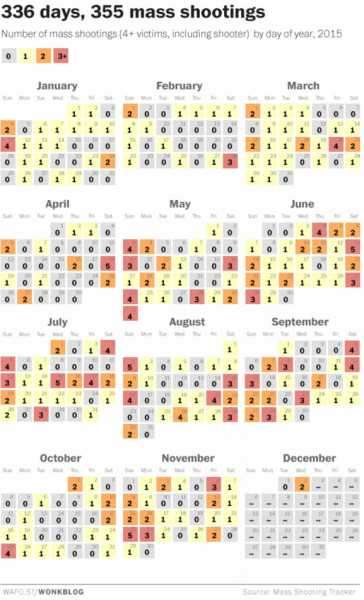 Whenever a mass shooting occurs, supporters of gun rights often argue that it’s inappropriate to bring up political debates about gun control in the aftermath of a tragedy.

But if this argument is followed to its logical end, then it will just about never be the right time to discuss gun control, as Christopher Ingraham pointed out at the Washington Post in 2015. Under the broader definition of mass shootings, America has around one mass shooting a day. So if lawmakers are forced to wait for a time when there isn’t a mass shooting to talk gun control, they could find themselves waiting for a very long time. 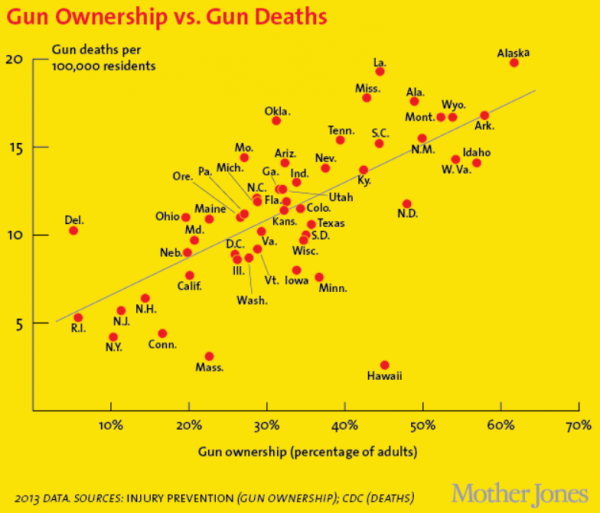 Using data from a 2016 study in Injury Prevention and the Centers for Disease Control and Prevention, Mother Jones put together the chart above that shows states with more guns tend to have far more gun deaths, including homicides and suicides. This has been found across the empirical research: “Within the United States, a wide array of empirical evidence indicates that more guns in a community leads to more homicide,” David Hemenway, the Harvard Injury Control Research Center’s director, wrote in Private Guns, Public Health.

6) It’s not just the US: Developed countries with more guns also have more gun deaths 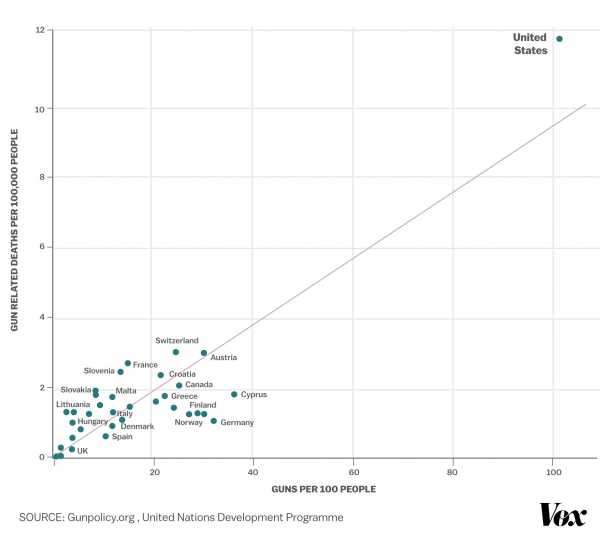 7) America is an outlier when it comes to gun deaths, but not overall crime 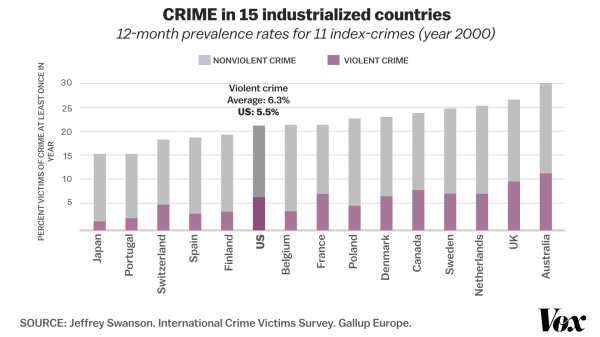 It would be one thing if the US happened to have more crime than other nations, but the existing data shows that not to be the case. America is only an outlier when it comes to homicides and, specifically, gun violence, based on 2000 data from Jeffrey Swanson at Duke University.

As Zack Beauchamp explained for Vox, a breakthrough analysis in the 1990s by UC Berkeley’s Franklin Zimring and Gordon Hawkins found that the US does not, contrary to the old conventional wisdom, have more crime in general than other Western industrial nations. Instead, the US appears to have more lethal violence — and that’s driven in large part by the prevalence of guns.

“A series of specific comparisons of the death rates from property crime and assault in New York City and London show how enormous differences in death risk can be explained even while general patterns are similar,” Zimring and Hawkins wrote. “A preference for crimes of personal force and the willingness and ability to use guns in robbery make similar levels of property crime 54 times as deadly in New York City as in London.”

This is in many ways intuitive: People of every country get into arguments and fights with friends, family, and peers. But in the US, it’s much more likely that someone will get angry during an argument and be able to pull out a gun and kill someone. 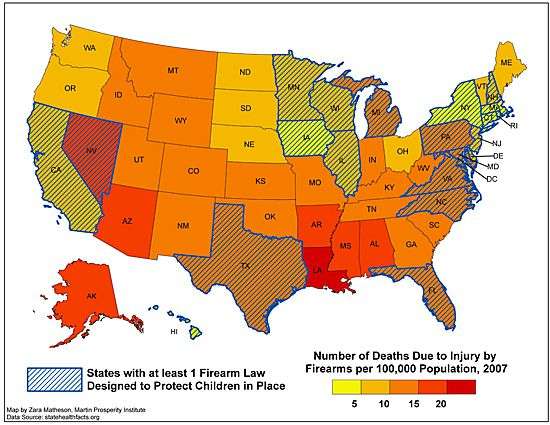 When economist Richard Florida took a look at gun deaths and other social indicators in 2011, he found that higher populations, more stress, more immigrants, and more mental illness didn’t correlate with more gun deaths. But he did find one telling correlation: States with tighter gun control laws have fewer gun-related deaths. (Read more in Florida’s “The Geography of Gun Deaths.”)

This is backed by other research: A 2016 review of 130 studies in 10 countries, published in Epidemiologic Reviews, found that new legal restrictions on owning and purchasing guns tended to be followed by a drop in gun violence — a strong indicator that restricting access to guns can save lives.

9) Still, gun homicides (like all homicides) have declined over the past couple of decades 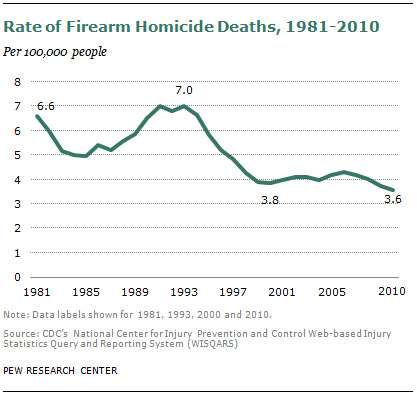 The good news is that firearm homicides, like all homicides and crime, have declined over the past several decades.

There’s still a lot of debate among criminal justice experts about why this crime drop is occurring. Some of the most credible ideas include mass incarceration, more and better policing, and reduced lead exposure from gasoline. But one theory that researchers have widely debunked is the idea that more guns have deterred crime — in fact, the opposite may be true, based on research compiled by the Harvard School of Public Health’s Injury Control Center.

10) Most gun deaths are suicides

Although America’s political debate about guns tends to focus on grisly mass shootings and murders, a majority of gun-related deaths in the US are suicides. As Dylan Matthews explained for Vox, this is actually one of the most compelling reasons for reducing access to guns: There is a lot of research that shows greater access to guns dramatically increases the risk of suicide.

11) The states with the most guns report the most suicides

12) Guns allow people to kill themselves much more easily 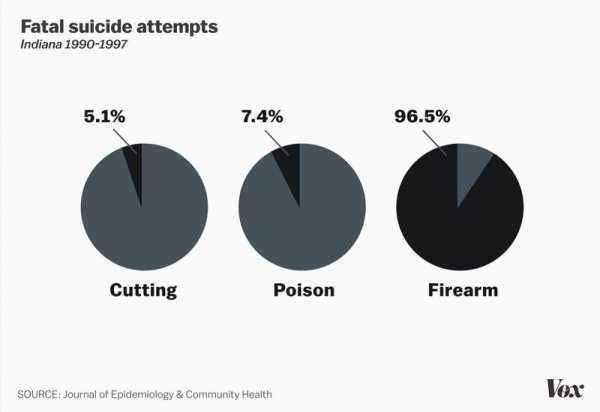 Perhaps the key reason access to guns so strongly contributes to suicides is that guns are much deadlier than alternatives like cutting and poison.

Jill Harkavy-Friedman, vice president of research for the American Foundation for Suicide Prevention, previously explained that this is why reducing access to guns can be so important to preventing suicides: Just stalling an attempt or making it less likely to result in death makes a huge difference.

“Time is really key to preventing suicide in a suicidal person,” Harkavy-Friedman said. “First, the crisis won’t last, so it will seem less dire and less hopeless with time. Second, it opens the opportunity for someone to help or for the suicidal person to reach out to someone to help. That’s why limiting access to lethal means is so powerful.”

She added, “[I]f we keep the method of suicide away from a person when they consider it, in that moment they will not switch to another method. It doesn’t mean they never will. But in that moment, their thinking is very inflexible and rigid. So it’s not like they say, ‘Oh, this isn’t going to work. I’m going to try something else.’ They generally can’t adjust their thinking, and they don’t switch methods.”

13) Policies that limit access to guns have decreased suicides 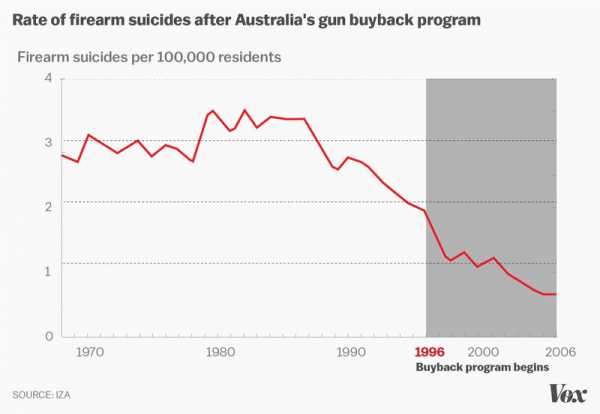 When countries reduced access to guns, they saw a drop in the number of firearm suicides. The data above, taken from a 2010 study by Australian researchers, shows that suicides dropped dramatically after the Australian government set up a mandatory gun buyback program that reduced the number of firearms in the country by about one-fifth.

The Australian study found that buying back 3,500 guns per 100,000 people correlated with up to a 50 percent drop in firearm homicides and a 74 percent drop in gun suicides. As Dylan Matthews explained for Vox, the drop in homicides wasn’t statistically significant (in large part because murders in Australia were already so low). But the drop in suicides definitely was — and the results are striking.

Australia is far from alone in these types of results. A study from Israeli researchers found that suicides among Israeli soldiers dropped by 40 percent when the military stopped letting soldiers take their guns home. The change was most pronounced during the weekends.

This data and research have a clear message: States and countries can significantly reduce the number of suicides by restricting access to guns.

14) In states with more guns, more police officers are also killed on duty

The findings could help explain why US police officers appear to kill more people than police in other developed countries. For US police officers, the higher rates of guns and gun violence — even against them — in America mean that they not only will encounter more guns and violence, but they can expect to encounter more guns and deadly violence, making them more likely to anticipate and perceive a threat and use deadly force as a result. 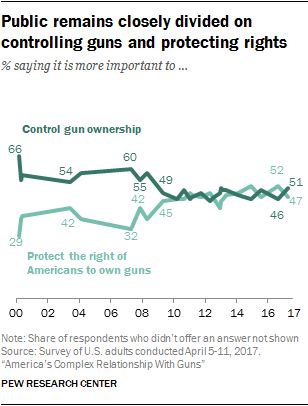 Over the past two decades, Americans have shifted from mostly supporting the concept of gun control to greater support for protecting “the right of Americans to own guns,” according to a 2017 Pew Research Center analysis of its surveys. This shift has happened even as major mass shootings, such as the attacks on Columbine High School and Sandy Hook Elementary School, have received more press attention. 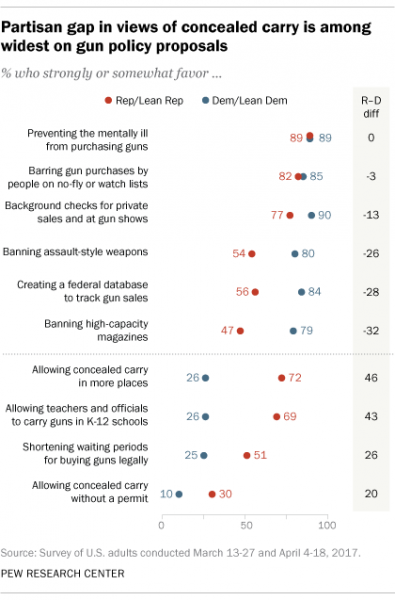 Although most Americans say they want to protect the right to own firearms, most also back many gun control proposals — such as stronger background checks, a database to track gun sales, and bans on assault-style weapons, according to Pew Research Center surveys.

This type of contradiction isn’t exclusive to gun policy issues. For example, although most Americans in the past said they don’t like Obamacare, most of them also said they like the specific policies in the health care law. Americans just don’t like some policy ideas until you get specific.

For people who believe the empirical evidence that more guns mean more violence, this contradiction is the source of a lot of frustration. Americans by and large support policies that reduce access to guns. But once these policies are proposed, they’re broadly spun by politicians and pundits into attempts to “take away your guns.” So nothing gets done, and preventable deaths keep occurring.