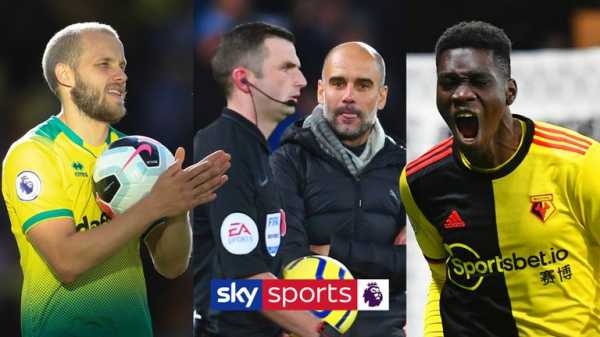 2:49 Here’s a reminder of some of the magic, drama and controversies from the Premier League season so far… and there’s not long to wait until it’s back!

So when can Liverpool now win the title?

It looks very much a matter of when, not if, Liverpool will win the title, and they could need only 90 minutes more to secure their first Premier League trophy.

If Arsenal beat City in that rearranged game, then Liverpool will be only three points from the title. That would mean victory at Everton (the venue for this clash is still to be confirmed) – live on Sky Sports and Sky Pick on June 21 – would be enough and confirm champions status in the sweetest style for Jurgen Klopp’s men.

Failing that, wins in any of their other eight remaining games, or even three draws along the way, would do it. If City don’t slip up against Arsenal, two wins, or any other combination of six points, would be enough for the Reds.

Liverpool are Invincible no more – but what records could they still break?