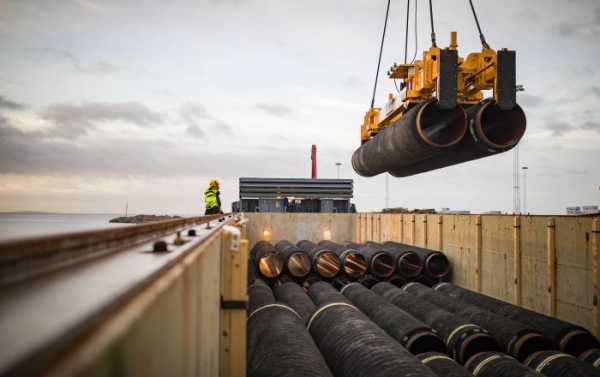 US senators moved to introduce new legislation on Thursday that would slap sanctions on all companies providing certification, insurance and port facilities for Nord Stream 2-related activities, with the bipartisan bill facetiously dubbed the ‘Protecting Europe’s Energy Security Act’.

Germany may impose extra duties on US gas imports if Washington continues its pressure campaign against Nord Stream 2, Die Linke party lawmaker and chairman of the Bundestag committee on energy matters Klaus Ernst has announced.

According to the lawmaker, US behaviour in relation to Nord Stream 2 can’t be treated as a friendly act, but rather amounts to an encroachment on the sovereignty of both Germany and the European Union.

Earlier in the day, a spokeswoman for the German Ministry of Economic Affairs announced Berlin’s position on Nord Stream 2 remains unchanged, that and Germany will continue to reject the principle of US extraterritorial sanctions on the project.

More US Sanctions on Nord Stream 2

The comments follow reports Thursday that a bipartisan group of US senators had introduced new legislation to slap new tough sanctions on the €9.5 billion pipeline project, which when completed would double the existing Nord Stream network’s capacity, and be able to pump up to 55 billion cubic meters of gas per year from Russia to Germany and Western Europe through the Baltic Sea, bypassing existing ground-based pipelines in Eastern Europe.

The US, which has sought to sell its own, more expensive natural gas to the Europeans, has long expressed displeasure with Nord Stream 2, and has sought to derail the project, first by pressuring and lobbying participant and partner nations, and then by introducing sanctions on Nord Stream 2 contractors in late 2019. That move prompted AllSeas, a Switzerland-based construction contractor, to drop out of the project, with just 160 km of pipe left to build. It also saw Russia sailing its Akademik Cherskiy pipelaying ship from its home port in the Russian Far East to the Baltic region, ostensibly to try to complete the project. Moscow has vowed to finish Nord Stream 2 one way or another, and expects to complete the pipeline by the first quarter of 2021 at the very latest.

Russian officials have not yet commented on the latest congressional sanctions bill, but indicated as recently as last week that even existing sanctions amount to US attempts to engage in unfair competition and are a violation of international law.

Also last week, US media reported that in their latest telephone call, US President Donald Trump and German Chancellor Angela Merkel exchanged heated remarks on a range of topics including Nord Stream 2, NATO and relations with China.