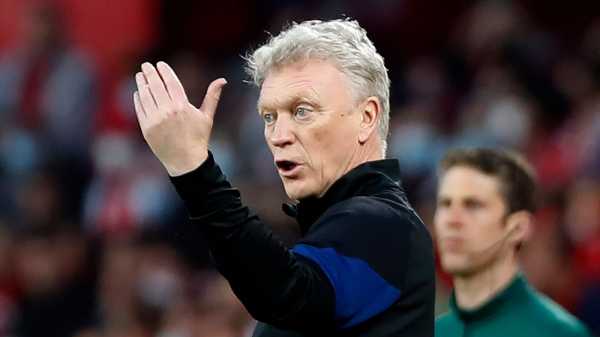 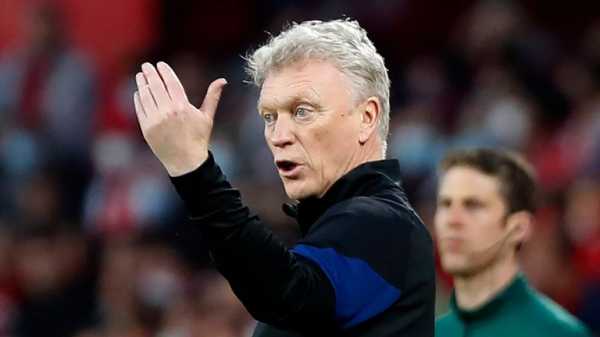 West Ham’s first European knock-out tie in over 40 years ended in a narrow 1-0 defeat by serial Europa League winners Sevilla – but David Moyes will have seen enough to feel his side are capable of overturning a one-goal deficit at the London Stadium.

A second-half goal by Moroccan forward Munir, who was only in the starting line-up after Ivan Rakitic was injured in the warm-up, settled the first leg in the Spanish side’s favour.

The Hammers boss will be confident of prolonging his side’s European adventure after chances were created but spurned in Seville in the absence of Jarrod Bowen. They will have to be more ruthless in the return leg.

“Quite often in football, the goals come back around, so I am hoping I get them in the next three games before the international break,” Moyes said. 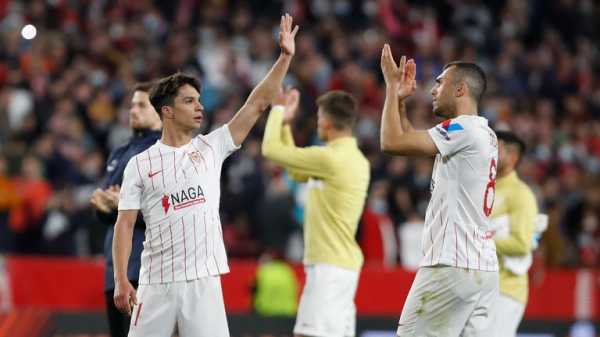 Image: Sevilla have won the Europa League on six occasions

“We need to be sharper, we need to be quicker to the ball in the box. We need to be more aggressive, all those things to get us over the line. We did a lot of good things tonight we just did not take the opportunities we got.”

Moyes has no choice but to ask the same set of players to play again at the weekend in the Premier League against Aston Villa, but he will be encouraged by Sevilla’s record of having failed to win away on the continent this season.

It says a lot about how far West Ham have come in a short space of time that it was four years ago to the day since they were beaten 3-0 at home by Burnley in a game marred by pitch invasions and protests against the owners.

Now the Hammers are rubbing shoulders with the continent’s elite and stepping out for the club’s biggest night on the European stage since 1981. Sevilla have scored just once in four away games in Europe this term. If Bowen can be passed fit for the return leg, they have a puncher’s chance of reaching the last eight.
Ben Grounds 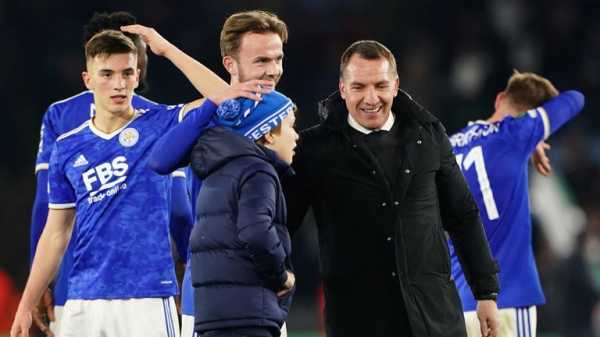 A one-goal victory, as Rennes pushed for an equaliser in added time, would have been a good night’s work for Leicester – and then they went and scored a “security goal”.

That’s how Kelechi Iheanacho described his delightful 93rd-minute strike to give his side a 2-0 lead to take to France next week for the second leg.

Marc Albrighton had already crashed in a piledriver during the first half before the Nigerian added what could well be a crucial goal in Leicester’s bid to reach the ECL quarter-finals.

The victory was another important step on their recent revival after a torrid run left boss Brendan Rodgers under pressure. Just one win in seven Premier League games saw Leicester drop out of the top-four race while they were also dumped out of the FA Cup by Nottingham Forest.

But now they have won their last four matches in all competitions for the first time since January 2021 and in doing have kept three consecutive clean sheets, having failed to keep one in their previous nine matches. The return of James Justin at right-back undoubtedly helped their cause in this tie.

Leicester had to beat a useful Rennes side without their talisman Jamie Vardy, but their forwards stepped up to the mark with Albrighton and Kiernan Dewsbury-Hall, in particular, impressing. Patson Daka, Vardy’s direct replacement, ran himself into the ground to allow the fresh legs of subs Maddison and Iheanacho to cause problems late on.

The return leg at Roazhon Park will be a tough challenge for Rodgers’ side. Indeed, the usual cliches of it being ‘only half-time’ have already surfaced, but Leicester have made a flawless start.
David Richardson

Rangers impress on the European stage once again 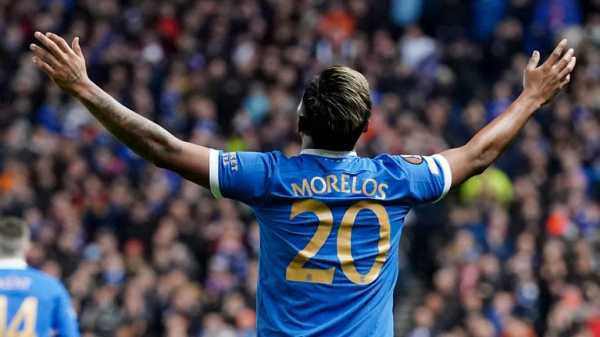 It was another famous European night at Ibrox, but this last-16 tie is not over.

Red Star were unbeaten in this season’s Europa League before this game and their last defeat in any competition came back in November, but Rangers went into the game as favourites and they showed exactly why.

James Tavernier converted from the penalty spot after Ryan Kent was fouled on the edge of the box.

Alfredo Morelos doubled the lead before half-time and Leon Balogun then added a third, heading in from Tavernier’s corner.

But the warning signs are still there as the Serbian side had three goals disallowed for offside and Rangers goalkeeper Allan McGregor pulled off a fine save to deny Aleksandar Katai from the penalty spot.

Rangers have struggled in domestic games of late, but after blowing Borussia Dortmund away they are now a step closer to the quarter-finals.
Alison Conroy

Deja vu for PSG in Europe 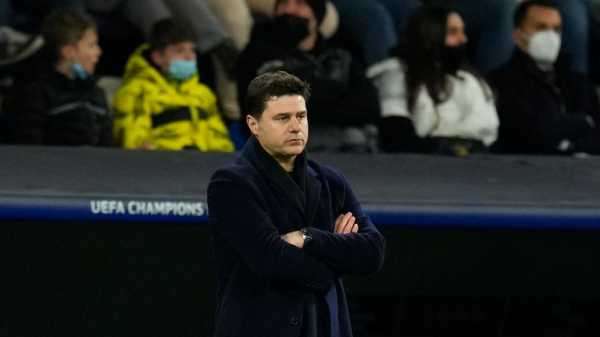 Mauricio Pochettino says his Paris Saint-Germain team feel a sense of ‘injustice’ about the first goal they conceded in the Champions League defeat to Real Madrid.

PSG have been here before. Two goals ahead against Manchester United after the first leg in 2019, four goals ahead of Barcelona in 2017. This time it was half an hour left, with two goals to the good against Real Madrid.

Wednesday’s last-16 tie was the fourth time out of nine that they have been knocked out of the Champions League when winning the first leg – only Real Madrid have done so more often (six times).

The mentality of their star-studded line-up was weak – perhaps scarred by the mistakes of the past – and they failed to recover after Gianluigi Donnarumma’s howler gifted Karim Benzema his opener. 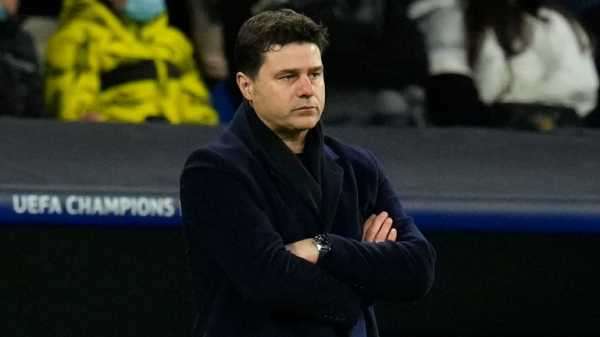 PSG’s players hardly had time to get their heads up after Benzema’s second before he made it 3-1 on the night and gave Real the crucial goal to send them through.

The Qatari owners’ search for a Champions League trophy goes on. Even the addition of Lionel Messi in the summer could not get them beyond the last 16, with the former Barcelona man anonymous on his return to Spain.

What lies ahead for PSG remains uncertain, with big question marks over the future of head coach Mauricio Pochettino.

Sporting director Leonardo insists Pochettino remains part of the project, but failure to lift the Champions League has only ended in one outcome for managers at PSG under the current owners. Just ask Thomas Tuchel, Unai Emery, Laurent Blanc and Carlo Ancelotti.
Zinny Boswell 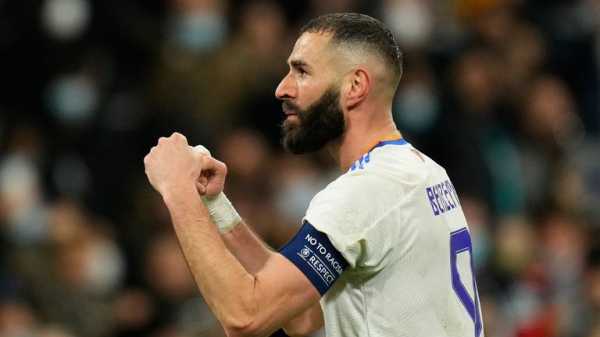 With just 30 minutes left of the tie, Real Madrid’s fate looked sealed, and it felt inevitable that PSG would progress.

That all changed, though, with a moment of perseverance from 34-year-old Karim Benzema, whose pressure forced Donnarumma into a mistake that proved to be the catalyst for an epic Champions League comeback.

His tenacity continued to drive Real forward as he put the ball in the net twice with just 10 seconds of open play separating the two goals.

It was a talismanic performance from the Frenchman, who took his place among Real Madrid royalty by overtaking Alfredo Di Stefano as the club’s third-highest scorer, behind only Raul and Cristiano Ronaldo.

He also moves ahead of Raul (66) as Real’s second-highest scorer in the Champions League on 67 goals, with only Ronaldo ahead (105).

On Tuesday night, Bayern Munich’s 33-year-old Robert Lewandowski scored an 11-minute hat-trick against RB Salzburg. A day later, Benzema completes his hat-trick in 17 minutes against PSG. Who said the No 9 was dead?
Zinny Boswell 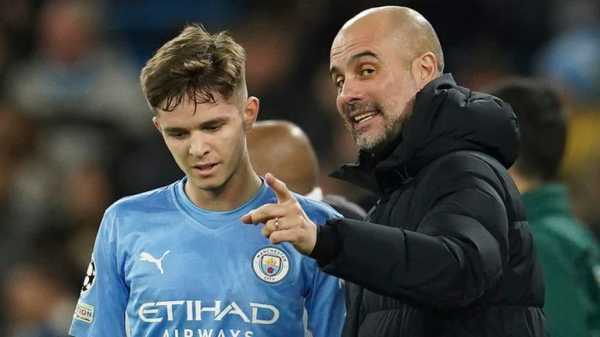 Man City manager Pep Guardiola talks about the huge value of young players in the team, but to get the opportunity to play they have to work hard and earn it.

Manchester City’s goalless draw with Sporting will not live long in the memories of those who watched it but it was certainly special for academy graduates CJ Egan-Riley, James McAtee and Luke Mbete.

Egan-Riley’s only previous senior appearance for City had come in the Carabao Cup against Wycombe Wanderers in September but here he was starting a Champions League knockout tie.

The 19-year-old acquitted himself well at right-back, completing 58 of his 60 attempted passes – giving him a 97 per cent success rate – while also defending assuredly when required.

“CJ played really well,” said Guardiola afterwards. “He didn’t miss one ball. He’s a guy who is a seven – there’s nothing exceptional in anything, but that is a good sign as a defender. He doesn’t make mistakes.”

McAtee, though, was the pick of the young trio following his half-time introduction, the 19-year-old immediately looking comfortable in City’s attack and combining intelligently with Gabriel Jesus in particular.

City have high hopes for McAtee, who has already made two Premier League appearances this season, and a lively showing on his Champions League bow offers further encouragement.

Defender Mbete, 18, did not have as much time to impress, replacing Aymeric Laporte with only six minutes of normal time remaining, but his introduction capped a satisfying night for the club’s academy.

Egan-Riley, McAtee and Mbete may not be involved when the quarter-finals come around but City will hope they have important roles to play in their future. This experience should serve them well.
Nick Wright 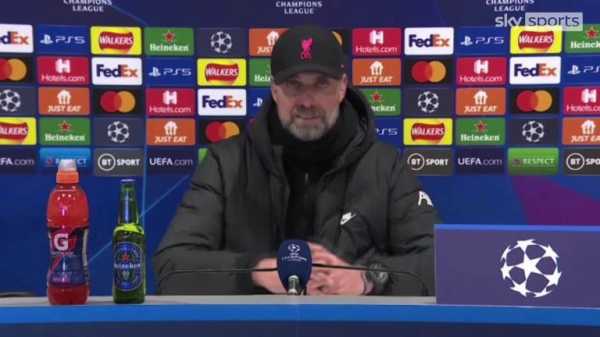 Liverpool manager Jurgen Klopp says that his side deserved to go through to the last eight of the Champions League against a tough opponent in Inter Milan.

“If there is a game we can lose then this was the one,” said Jurgen Klopp afterwards. He was right. His Liverpool players left the field having been beaten on the night by the 10 men of Inter but safely through to the quarter-finals of the Champions League.

It was not Liverpool at their convincing best. “I didn’t like our counter press,” said Klopp of how his team started the match and Mohamed Salah also appeared to acknowledge the possibility that the mindset might not have been quite right from the outset.

“Maybe at the back of our mind we felt overconfident at the moment,” Salah told BT Sport when asked about the reasons for the reversal after having previously been unbeaten since the turn of the year. “We lose a game. Maybe that will give us a little bit of a push.”

Seeing Salah smile his way through his interview, there is no hint of this upsetting momentum. Twice he had hit the foot of the post but he knows that the margins are small. Next time, perhaps when it matters rather more, the chances could go in.

“We didn’t use our chances,” added Klopp. But his players received a reminder of their own fallibility, an examination to underline the need to keep working. Defeats do not come more useful. “We are deservedly in the quarter-final and that is all I am interested in.”
Adam Bate