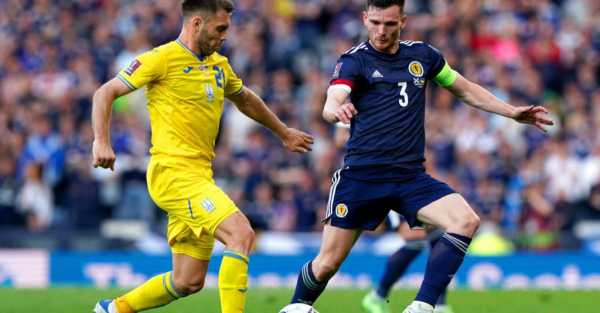 Scotland captain Andy Robertson admits he is suffering the worst emotions of his football career after a number of near misses in huge games.

But the Liverpool player is more concerned about the feeling of loss among his Scotland team-mates after their World Cup hopes were dashed by Ukraine.

A 3-1 Hampden defeat in the play-off semi-finals on Wednesday means Scotland’s long wait for a first World Cup experience since 1998 continues.

The defeat followed quickly from Liverpool’s Champions League final reverse against Real Madrid and being pipped by Manchester City amid late drama on the final day of the Premier League season.

Robertson has also come in for criticism after being filmed drinking beer on Liverpool’s open top bus tour three days before the game with Ukraine.

The 28-year-old said: “Personally, it’s been the toughest 10 days of my football career, of course it has been. Emotionally, mentally, physically, everything. So it’s not been great.

“But to be honest I will deal with that myself, I will go away and think about that myself.

“But I am just gutted for those lads in there. Obviously I was desperate for them to get to a World Cup and play on the biggest stage and unfortunately we have fallen short.

“But we need to be ready the next time it comes around. The way it is with international football, people get older and you never know when your last chance of it will be. That’s why it hurts so much.”

Only Craig Gordon prevented Ukraine being out of sight before Callum McGregor made it 2-1 in the 79th minute, and Scotland’s late pressure came to nothing before they were caught out on the counter-attack with the last kick of the ball.

Ukraine caused Scotland all sorts of problems as they picked up good possession in dangerous areas and Steve Clarke’s men looked nothing like the team that had won their final six games in the qualifying group.

“We didn’t put a performance in that deserved to go through,” Robertson said. “We didn’t quite get our foot on the ball. They settled quicker. Usually in these games the team that settles quicker has the upper hand, and that’s what happened.

“We didn’t play our football until it was too late. We knew they were going to tire but we didn’t start really putting pressure on them until the last 15 when you are 2-0 down and you start chasing the game and you leave yourselves open to counter-attacks.

“But we had to push and we gave it a fight for the last 15, but that’s not good enough to win a game.”

There were unprecedented emotions surrounding the game as Ukraine returned to action for the first time since the invasion of Russia in February.

When asked if that had impacted on the game, Robertson said: “I can’t answer for them. I know we were highly motivated, highly determined to get to the World Cup, something we have never achieved before. You would need to ask them how emotional or determined they were.”

Scotland will need to improve to make their Nations League campaign a success given that Ukraine are also in their group.

They now prepare for a double-header against Armenia either side of a trip to the Republic of Ireland as they look to get off to a quick start in a competition which proved a passageway to the previous European Championship finals and could be again.

Robertson said: “Look, we are building something here. I believe sometimes you need to take bumps in the road and this is certainly a huge one.

“But we have already been to one (major finals) and we have to try and get to another.

“We had a really good campaign this time round that secured the play-off but the play-off game we weren’t good enough unfortunately.”