Tipperary got any rust out of their legs in a 11-point win over Waterford, which served as a warm-up for their Munster semi-final clash against Cork next Saturday.

With injury-worries Steven O’Brien and Conor Sweeney left on the bench as a precaution, although O’Brien was introduced in the second-half, Tipp will have been glad to see Philip Austin return from an injury lay-off which has kept him out of action all spring. 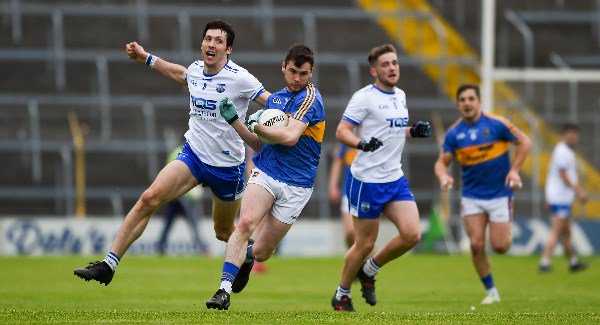 Liam McGrath’s nine points, two from play, which included frees taken off both feet, will also be welcomed on his first championship start.

Waterford kept the deficit to four points at half-time, 0-7 to 0-3, managed largely through a defensive system which at times saw all 27 players bar one-man full-forward-line JJ Hutchinson, his marker Alan Campbell and opposition ‘keeper Evan Comerford located inside the Waterford 45.

Waterford held most of the ball in the opening quarter, including the first 120 seconds of the game without interruption, but failed to put a score on the board until Gavin Crotty pointed in the 28th minute.

By that stage both sides had traded six wides, with Tipp at least managing six points to somewhat lift the majority of the 1,658 supporters’ spirits. Tipperary lifted their performance to kick on after half-time, scoring the next eight points to establish an insurmountable 12-point lead, 0-15 to 0-3.

Quinlivan turned on the afterburners to fist over two close-in points, while McGrath, O’Halloran, Josh Keane and Liam Boland, with the pick of the bunch, added more from play.

The Déise did kick three fine points in a row late on, through Conor Murray, Jason Curry and JJ Hutchinson But McGrath kept Tipp ticking over to close out a 20-point tally.