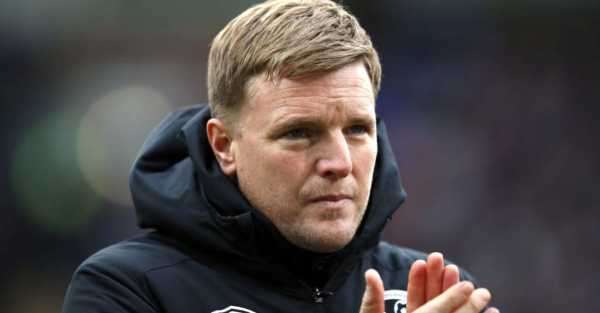 Eddie Howe has walked into St James’ Park with a major job on his hands.

The new Newcastle boss, whose appointment was confirmed on Monday, finds himself pitched into a relegation battle which has to be won if he is to enjoy the riches which will be at his disposal should he manage to protect the investment made by Amanda Staveley’s Saudi-backed consortium by keeping the club in the Premier League.

Here, the PA news agency takes a look at some of the issues on the immediate agenda.

Howe inherits a squad which has forgotten how to win football matches.

There is no lack of character in a dressing room which still includes Karl Darlow, Paul Dummett, Isaac Hayden, Jonjo Shelvey and Dwight Gayle, who helped to drag the club back into the top flight following relegation at the end of the 2015-16 campaign.

Indeed, some onlookers would suggest they have punched above their weight to retain their Premier League status since.

However, the Magpies have won just seven of their last 38 league games and none of the 11 they have played to date this season to sit off the foot of the table only on goal difference, and confidence has visibly ebbed away as a result. That needs to change, and swiftly.

During Rafael Benitez’s three-year reign on Tyneside, he adopted an unapologetically safety-first approach based on solid and organised defence coupled with swift counter-attack.

The Spaniard’s rationale, based on an assessment of the players at his disposal, was that his team would leave themselves exposed at the back if they over-committed going forward, and blunt up front if secure in defence, an analysis he repeatedly compared to someone trying to keep both their head and feet warm with a short blanket.

Successor Steve Bruce was keen to play a more attacking brand of football and switched between three-man and four-man rearguards in an attempt to do so, with mixed results.

Ultimately, he fell between two stools as his team scored goals, but not in sufficient quantities, and conceded far too regularly. Howe will have to work with the same players until January and must quickly determine which way to jump.

In Allan Saint-Maximin, the new manager has a serious talent on his hands, if one blunted in recent weeks by Newcastle’s general malaise and greater attention from opponents.

The Frenchman’s pace, power and dribbling ability have been jealously observed by potential suitors since his bargain £16million (€13.8 million)arrival from Nice in August 2019. He and £20million striker Callum Wilson, who has scored 16 goals in 32 league appearances for a struggling team since leaving Bournemouth, where he previously worked under Howe, represent Newcastle’s major threats.

Both men have been sidelined for significant periods since their respective arrivals at St James’ and the fact that the club have no comparable replacement for either has been illustrated graphically in their absence.

Keeping the pair fit and in form, and providing the support they need to prosper, is imperative.

Where there’s a Willock…

His speed and eye for goal in a pool of midfielders which otherwise lacks pace and forward thrust proved key weapons, but his lack of action in the Gunners’ pre-season programme as Newcastle conducted their pursuit and a foot injury since have severely limited him this time around.

It may be too much to expect a repeat of his goal-scoring heroics from the last campaign on a sustained basis, but Willock’s revitalisation has to be a priority.

The financial restrictions imposed by former owner Mike Ashley essentially allowed the squad to stagnate, and what funds were released were not always invested wisely, with the reasons behind Joelinton’s club record £40million capture from Hoffenheim, for example, still exercising minds.

The Magpies have otherwise traded largely at the lower end of the market and not always to best effect.

Howe’s squad needs significant improvement and as soon as possible, meaning targets have to be identified early and pinned down quickly, even if the club’s new-found wealth means prices are likely to be inflated.