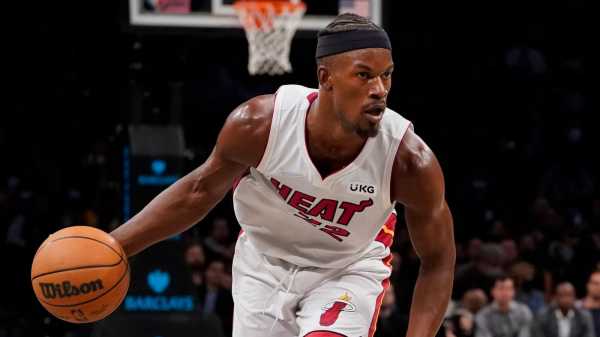 There are six teams boasting a league-best 5-1 record to start the season but it’s the Miami Heat – and Jimmy Butler in particular – who have been most impressive. But before we get to that, let’s start in Los Angeles, where Carmelo Anthony continues to roll back the years… 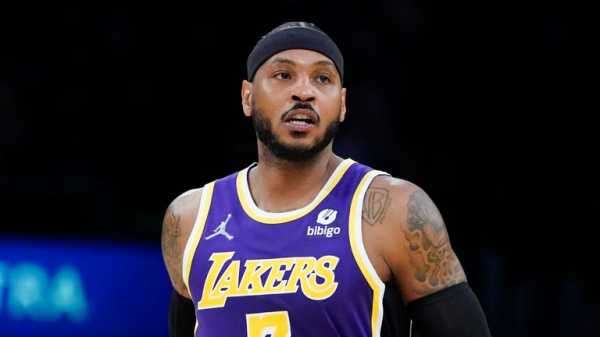 Here’s a stat for you: through seven contests, Carmelo Anthony is averaging the most points per game (16.7) since his final season as a New York Knick. That came all the way back in 2016-17, when a then-32-year-old Melo put up 22.4 points, 5.9 rebounds and 2.9 assists per game and was named an NBA All-Star for the tenth – and likely final – time.

Now 37, he is thriving on the opposite coast as a pure-scoring sixth man for the Lakers, who have a 4-3 record so far.

Here’s another: Anthony is shooting 50 per cent from the field and a blistering 52.2 per cent from deep. That’s on high volume too, with 6.6 attempts per game, meaning he sits in fourth for three-pointers made across the entire league at the time of writing.

Melo really is looking like his best self. Or, more accurately, the best version of Carmelo Anthony you’re going to get at this point in career. It’s reminiscent of his performances for Team USA as the roving spot-up shooter, lurking and looming a step behind the arc to rise up and drain any and every pass that comes his way without hesitation.

Remember him scoring 37 points in 14 minutes against Nigeria at London 2012? It’s felt like that during every game at Staples Center, where his three-point shooting has jumped to an even more ridiculous 67.6 per cent in front of Jack Nicholson and company. 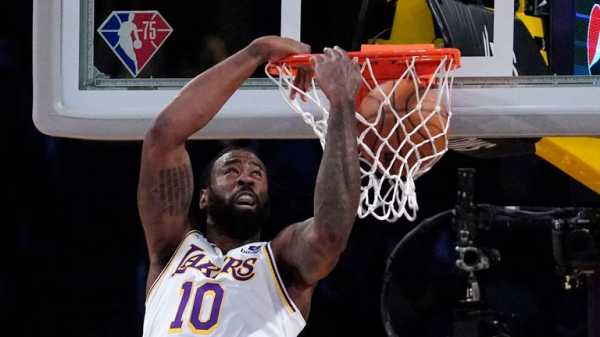 This has always been his calling. The younger Anthony was too enamoured with needless triple-threat jab steps and heavily contested mid-range jumpers. The more mature version is taking better shots in the rhythm of the Lakers offense and seeing his effective field goal percentage (64.6 compared to a career average of 48.4) explode as a result.

It will be nigh-on impossible for him to maintain this hot streak for the duration of the season but that isn’t the point. If the Lakers see these kind of lights out shooting performances in the playoffs, when it really counts, Anthony will be worth his weight in gold for the spacing he provides. 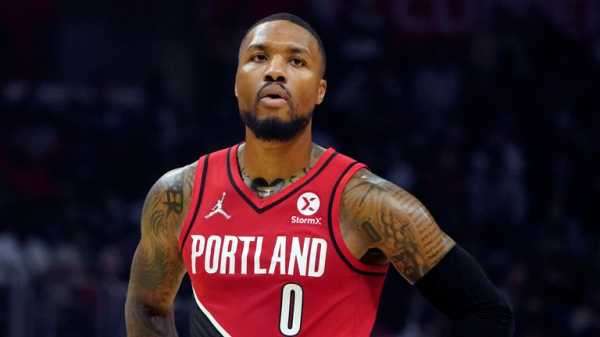 In stark contrast, Damian Lillard’s typically-deadly jump-shot just isn’t falling for him at the moment.

Portland’s talisman is averaging the lowest points per game of his career (18.3), along with the worst shooting percentages: 34.9 per cent from the field and a woeful 23.2 from deep. These splits will undoubtedly pick up – Lillard is too good a player for them not to – but it doesn’t bode well for the Trail Blazers (3-3) in their first season under new head coach Chauncey Billups.

Dame will regain his superstar form again sooner rather than later, but you can’t help feel that all the years of toiling on a pseudo-contender with only one Conference Finals appearance to show for it may well have taken its toll on him mentally. 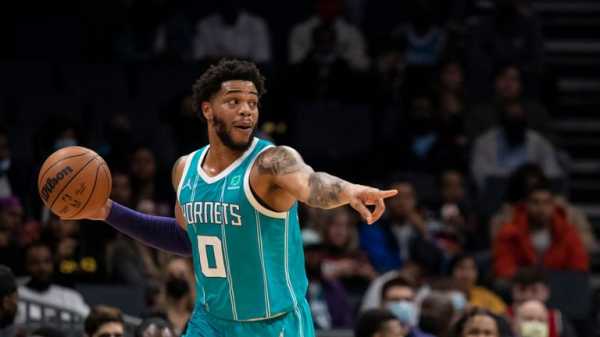 Before Billups, Terry Stotts was the only coach he had ever known in the NBA. He agreed to part ways with the franchise after four first-round post-season exits in five years, a much-needed cultural reset for a team that seemed to be treading water. The problem is that with a rookie head coach and a paper thin roster the Blazers still don’t look like competing for a championship any time soon.

Up to this point, Lillard has been loyal to a fault to the organisation that drafted him in 2012. But are these shaky performances the beginning of the end, especially as he heads into the twilight of his career watching All-Star after All-Star team up around him?

Don’t be too surprised if Lillard’s name starts reappearing in trade rumours come December, especially if his performances return to normal and the Blazers find themselves struggling to stay above the .500 mark – a necessity to reach the playoffs in the West.

Scottie Barnes is the real deal On draft night the Toronto Raptors shocked the league by selecting Scottie Barnes with the number four overall pick instead of the widely-expected choice: Gonzaga guard Jalen Suggs. It’s still very early, but as it stands the move is looking a lot like a Masai Ujiri and Bobby Webster masterstroke.

The 20-year-old former Florida State forward has been the standout rookie through the first two weeks of the season (although Evan Mobley and Chris Duarte have also been impressive) and looks every bit as though he belongs in the modern NBA.

Barnes has been thrown into the deep end as part of a Raptors team in a rebuilding phase following Kyle Lowry’s departure in the off-season. He’s started all seven of their games so far and thrived to the tune of over 18 points per game and almost 9 rebounds. 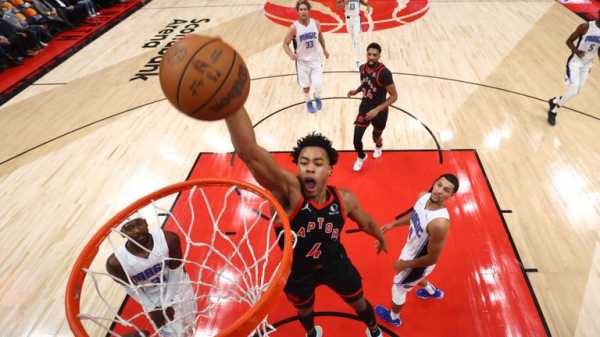 The major concern about Barnes heading into the draft was his efficiency as a scorer and while the doubts about his three-point stroke have been accurate, he is still hitting 55 per cent from the field and has shown an ability to shoot from mid-range and finish around the rim.

Barnes has also been a demon on the offensive glass, averaging 3 offensive boards per game: the joint best mark in the league for a non-center. For comparison, it’s also tied with Nikola Jokic and ahead of the likes of Bam Adebayo (2.8) and Deandre Ayton (2.6).

Projections of Barnes as a long, tenacious defender who can switch across forwards and guards have been exactly as advertised. Irrelevant of Suggs – it seems unfair to compare the two players forever – Barnes has been a perfect fit for the Raptors and how they want to play in the post-Lowry new era. 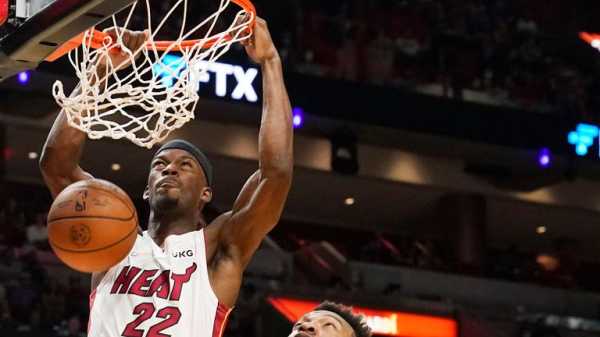 Which brings us neatly onto Jimmy Butler, who wasn’t even named an All-Star last season but has quietly been the best player on the best team in the league through the first fortnight of NBA action.

Perhaps unsurprisingly given their acquisitions of dogged defenders Lowry and P.J. Tucker the Miami Heat have been the best defensive team in the league so far with just 95.1 points allowed per 100 possessions. Next best are the Denver Nuggets (97.5) and Rudy Gobert-anchored Utah Jazz (98.3). For historical context, the last teams to finish a full season under 95.0 in defensive rating were the 2003-04 San Antonio Spurs and Detroit Pistons.

Butler is at the heart of this as you’d expect, playing his trademark brand of suffocating perimeter defense and stealing the ball for fun (2.8 per game, second in the league). In terms of advanced metrics, he also leads the league in both defensive win shares (0.6) and defensive points saved (+21.59). 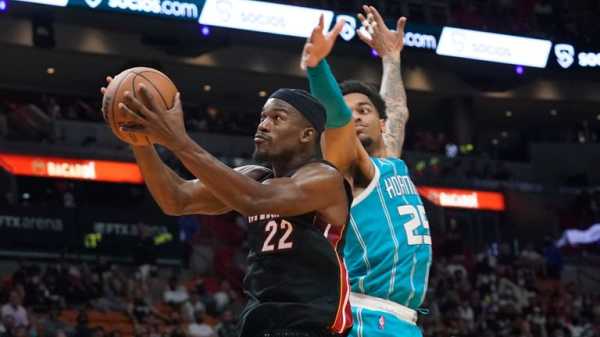 We saw LeBron James play as a free safety defender for Erik Spoelstra during his time in Miami. With better defenders now surrounding him, are we seeing the same thing – and potentially a Defensive Player of the Year season – from Butler?

Alongside that the 5-1 Heat have been the fourth best offensive team in the league, scoring 111.6 points per 100 possessions. Yet again there’s Butler leading the league in offensive win shares with 1.1 – a nudge ahead of Kevin Durant.

These kind of advanced statistics are never perfect, and never the whole story, but if you’ve caught any of Miami’s games you’ll know that the eye-test matches up. Butler is absolutely playing at an MVP level on a Heat team that have decimated everyone they’ve met so far other than the Indiana Pacers, for some reason.

If you’re not paying attention to Jimmy this year, you should be.

LeBron James with a trick and a treat

It only feels right to end with this NBA curio from Halloween night: a LeBron James doppelgänger watching The King himself in action last night against the Houston Rockets.

While we can’t confirm with any certainty that this is, in fact, evidence of a LeBron James clone, at least not without a DNA sample and testing laboratory, it could well mean he has an identical twin brother. Essentially a Markieff/Marcus Morris type-situation he has simply kept secret his entire career.

On a serious note, it was fantastic to see James still throwing it down in style even in the 19th year of his career. Long may it continue. 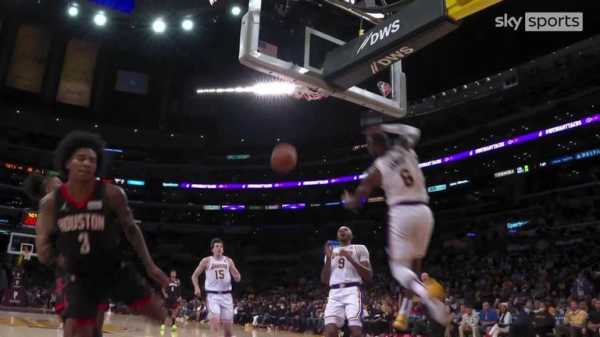