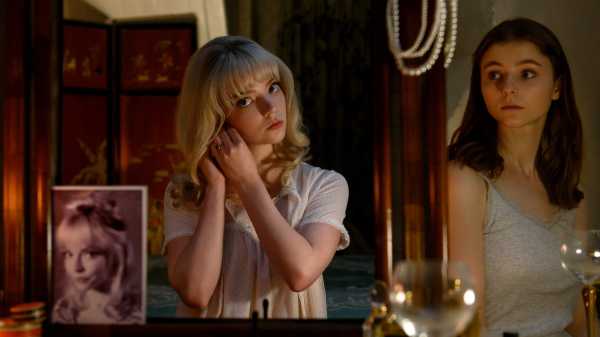 Sometimes a movie clearly represents a filmmaker’s effort to say something, to send a proverbial message. In Edgar Wright’s “Last Night in Soho,” the message gets garbled in transit between the film’s epigrammatic conceit and its cinematic form. It’s shaped like a classic coming-of-age tale: a young provincial, Eloise Turner (Thomasin McKenzie), goes to the metropolis to realize her dreams and, in the process, has her illusions dispelled. The script (which Wright co-wrote with Krysty Wilson-Cairns) expands this concept into a social history that fuses with horror-movie tropes to reveal an extravaganza of stifled nightmares that Eloise will have to confront in order to succeed. But the form that is imposed on the film’s significant and worthy ideas ends up stifling their clear and considered expression.

Eloise, who’s eighteen, is an aspiring fashion designer whose bedroom, in the house in Cornwall where she lives with her grandmother, Peggy (Rita Tushingham), is a shrine to the pop culture of the swinging London of the mid-sixties. It’s a period that Peggy looks back on nostalgically. She has raised Eloise on the music and the myths of that era, and Eloise heads to the London College of Fashion in order to fulfill her retro visions. But the backstory that explains this quest seems borrowed from a screenwriters’ manual of prefabricated motives. Eloise’s mother once had similar ambitions, but London (as Peggy explains) was too hard for her; she was also mentally ill, and died by suicide when Eloise was seven. (Eloise never knew her father.) Thus, Eloise goes to London on a heroine’s journey of ancestral redemption—and, in the process, faces up to the misogynist monstrosity of swinging London that rendered it unendurable for her mother and for other women who ended up destroyed by it.

An overly complicated and contrived series of setups turns Eloise’s life in the city, which starts in a sterile, modern dormitory, into a haunted-house tale. (Fair warning: some spoilers ahead.) Eloise has a roommate from Hell, the vain and envious Jocasta (Synnove Karlsen), and when, on the first night in the dorm, Eloise ends up bedless because of a wild party, she rents a room in a private home owned by Ms. Collins (the late Diana Rigg) that’s, coincidentally, well preserved in sixties styles—of an altogether different sort from that of her bedroom in Cornwall, rumpled and functionally un-chic. Eloise falls asleep in her new room, and in her dreams she sees herself back in mid-sixties London as an aspiring pop singer with a blond bouffant and a pink tent dress who aggressively pushes her way into a night club, into an interview with a slick young operator named Jack (Matt Smith), and into a job backup dancing at a burlesque club. Yet this alter-Eloise turns out to be another character altogether—a young woman of those times named Sandie (played by Anya Taylor-Joy), whose increasingly troubled world Eloise witnesses in her nightly dreams. Eloise is a virtual presence, an observer who is unable to interact with Sandie. But, as she bears silent witness to the degradations and dangers that Sandie endures, Eloise begins to make desperate efforts to intervene, to break the one-way mirror of transparent silence that lets her see and not be seen, except by us viewers.

Unlike the films of such great modern stylists as Wes Anderson, Sofia Coppola, and the three Ter(r)ences—Davies, Malick, and Nance—Wright’s movie offers an illustrated screenplay, in which images deliver and adorn the text rather than embody its ideas. Nonetheless, the images in “Last Night in Soho” are often fleetingly ingenious. Wright excels at varying his pace, at mixing slow builds with sharp reveals, at developing his story with incremental logic that gets gleefully bumped off course by the sudden introduction of new, surprising details realized with imaginative effects. In one sequence, Sandie comes down the sweeping steps of a night club, and Eloise appears alongside her in multiple strips of vertical mirrors. In another, as Sandie dances with Jack, her identity flashes back and forth between her face and Eloise’s in the course of a single swinging shot. The most powerful effect is the recurrence, in a virtual fusion of Sandie’s vision and Eloise’s, of men who torment Sandie, in the form of zombies whose appalling likeness is conjured through stark effects involving focus and double exposure (like red-and-blue anaglyph 3-D images seen without 3-D glasses).

Yet such pleasantly jolting moments are yoked to a drama of absurdly proliferating intricacy amid ever more simplistic resolutions. (Indeed, the plot points seem created merely to give rise to effects, with little thought about their causes.) There are spiked drinks—offered by women, with no sexual motive. The movie’s attitudes about sex work seem borrowed from Victorian schoolrooms. The complications include mistaken identity, a prostitution ring, a police investigation. Through it all, there’s the looming but vague image of Eloise’s late mother, who remains so undefined as to become a symbol of nothing. There is, of course, a charming romance with a caring and earnest young classmate named John (Michael Ajao), whose experience, as a Black man in London, is reduced to a one-liner about sympathizing with Eloise’s feeling of not belonging.

By far the most fascinating and moving aspects of “Last Night in Soho” involve Eloise’s family story, the convergence of personal and cultural legacies through the generations in the experience of her mother and grandmother. But the movie leaves these connections unspecified and undetailed. It could have been a film about the nature of the past, the paths of access to it, the creation and transmission of myths (which, of course, can’t be dispelled without being identified), the mores that prevailed beneath those myths, their role in forming and deforming the cultural objects that endure. Instead, Wright illuminates neither the present nor the past, neither the character who’s seeking to make her way in the present nor her understanding of the roots of her own artistic mission. Rather than fusing its substance and style, “Last Night in Soho” sacrifices the former to the latter, thus revealing its commercial cynicism. While apparently debunking nostalgia, Wright only feeds it. He doesn’t appear to have any real interest in exploring the infamous ways of the past beyond straining after today’s storytelling trends—which is to say, straining after popularity itself.