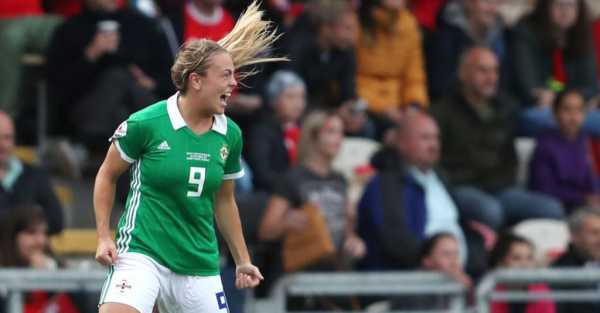 Simone Magill scored four times to help Northern Ireland record an impressive 11-0 win away to North Macedonia in their Women’s World Cup qualifier on Thursday, after which manager Kenny Shiels dedicated the victory to the late George Best.

The visiting side were able to better England’s result of 8-0 against the same opponent in Group D to boost their hopes of reaching the tournament in 2023.

Rachel Furness got the ball rolling after four minutes and would go on to score a hat-trick but Everton ace Magill was able to overshadow the Liverpool midfielder by grabbing four goals.

Rebecca McKenna, Lauren Wade, Kirsty McGuinness and Rebecca Holloway were the other players to find the net with Northern Ireland 7-0 up at half-time.

Boss Shiels, who has already helped the country qualify for next summer’s European Championships, dedicated the result to Manchester United great and Belfast-born Best, who died on this day in 2005.

He said: “Before it started, we said ‘let’s do it for George’ because he was our hero and he wore the number 11 shirt when he played for us.

“We’ve done it in the 11th month, we’ve scored 11 goals and so all of that is resonating with me.

“It’s fantastic and I hope he is watching us up there to see that we’re doing it for Northern Ireland because he was one of our heroes, if not the hero.

“That’s been in my inner thoughts. Try and get 11 and get a message up to George.”