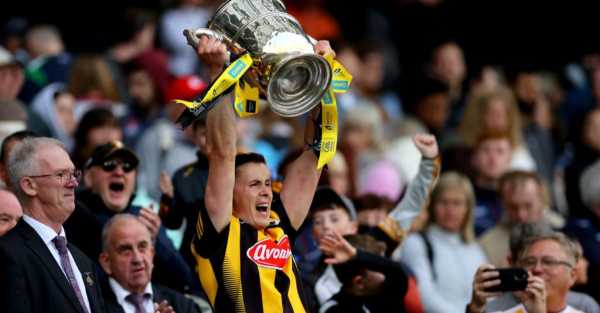 Kilkenny claimed the Leinster Hurling title with a 0-22 to 0-17 win over Galway this evening at Croke Park.

The rivalry between managers Henry Shefflin and Brian Cody was back under the microscope as Galway attempted to stop the Cats from winning their third Leinster Hurling title in a row.

Captain Richie Reid lifted the Bob O’Keefe Cup for Kilkenny, marking the 18th Leinster title for the Cats under Cody.

Earlier, the curtain-raiser at GAA headquarters saw the Joe McDonagh Cup decider between Antrim and Kerry.

Antrim will play in the Leinster championship next year as they were crowned champions for 2022.

Darren Gleeson’s men had to survive a late fightback from Kerry to win a thrilling final 5-22 to 3-24.

Clare have booked their place in the semi-finals of the All-Ireland Minor Hurling Championship.

The Banner beat Laois by 0-21 to 1-15 at Cusack Park to advance from the quarter-final round-robin section with Galway.

They’ll now progress to the last-four alongside provincial champions Offaly and Tipperary.

Mayo, Clare and Cork are into the second round of the All Ireland Football Qualifiers.

James Horan’s men booked their spot in the draw with a four-point win over Monaghan in McHale Park.

The Rebels got the better of Louth by four points at Pairc Ui Chaoimh.

New York played their first inter-county match on Irish soil since 2001 this afternoon when they visited O’Connor Park for their Tailteann Cup quarter-final with Offaly.

The Faithful County had no problems in putting New York to the sword with a 3-17 to 0-11 point win in Tullamore, progressing to the semi-finals of the cup.

Cork have made it three wins from three in the Glen Dimplex All Ireland Senior Camogie Championship.

They came from behind to beat Dublin by 2-10 to 0-9 in Group One thanks to two goals from Katrina Mackey.

Earlier, Wexford beat Clare 1-9 to 0-11 in Sixmilebridge, with Joanne Dillon scoring the goal for the Model County.

The midfielder hammered a long-range 75th-minute effort past keeper Caoimhin Kelleher, making his competitive debut for Ireland, to hand the League B newcomers victory and revenge for their controversial Euro 2012 qualifier defeat in Dublin.

Stephen Kenny’s men, who have now not won in 11 attempts since the competition was introduced, could have few complaints on a night when their eight-game unbeaten run came to a disappointing end at a sweltering Republican Stadium.

Women’s National League leaders Shelbourne were looking to extend their winning run to seven matches this evening but drew level 1-1 with Galway thanks to Jenna Slattery’s second-half strike.

Earlier, second-placed Wexford Youths were away to Sligo Rovers, who took all three points thanks to Emma Doherty’s chip and Amy Mahon’s penalty save in the last few minutes.

In the other games of the day, Peamount beat Cork City on a scoreline of 5-0, DLR Waves beat Treaty United 4-0, and Athlone beat Bohemians 2-1.

Leinster have booked their place in the semi-finals of the United Rugby Championship following a massive win over the Glasgow Warriors this afternoon.

Dan Sheehan and Jordan Larmour scored two tries each for the homeside at the RDS as they ran in 12 tries overall.

The Blues have strolled into the next round following a 76-14 victory.

Earlier, the Bulls have booked their place in the next round with a 30 point to 27 win over fellow South Africans the Sharks.

The Pole triumphed in straight sets to claim the Grand Slam for the second time, after her previous success at Roland Garros in 2020.

Swiatek has stretched her unbeaten run to 35 matches and has now won her last six competitions in a row.

Rory McIlroy is back to level par in his third round at the Memorial tournament on the PGA Tour.

It leaves him even after 16 holes, five under all round and eight shots off the lead of American Billy Horschel who is 13 under par.

Shane Lowry finished on level par for the day, leaving him on three under par for the tournament and in a tie for 19th.

Sport GAA: All this weekend’s fixtures and where to watc… Read More

Desert Crown, ridden by jockey Richard Kingscote, has won the Derby at Epsom.

The 5-to-2 favourite trained by Michael Stoute finished ahead of Hoo Ya Mal and Westover.

It’s a 6th win in the race for the British trainer.

It was run in memory of former rider Lester Piggott, while Britain’s Queen Elizabeth – celebrating her Platinum Jubilee – watched from home as she missed the event for only the third time in her reign.