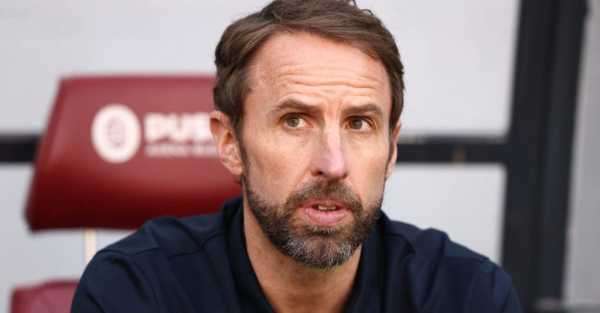 England manager Gareth Southgate blamed “inherited thinking” as a crowd of over 30,000 supporters – mainly children – jeered his players taking the knee ahead of their Nations League defeat in Hungary.

The Three Lions were once again booed as they performed their pre-match anti-racism and discrimination gesture, despite the hosts being forced to play behind closed doors.

The majority of the bottom two tiers of the Puskas Arena were full for the Group A3 opener in Budapest as Dominik Szoboszlai’s second-half penalty secured a 1-0 win for the hosts.

UEFA had ordered Hungary to play three games in empty stadiums, the third of which has been suspended, following the behaviour of fans during Euro 2020.

One of the UEFA stadium bans came here against England but, while article 73 of the governing body’s disciplinary regulations caps the number of VIP guests, team delegations, UEFA staff and those holding complimentary tickets, there is no limit on the number of school children invited to the match free of charge, with one adult accompanying every 10 children.

That led to the unsavoury scenes before kick-off, with Southgate believing the thousands of children in attendance were ‘influenced’ by their elders.

“How that aligns with the decision is difficult to understand,” Southgate replied when asked if the attendance for the game makes a mockery of UEFA’s rulings.

“From a development perspective, I want and need the team to be playing in front of supporters. But of course, that’s not the point in this instance.

“So I’m torn on what we actually got from that and what the reality should have been. I think that needs some consideration without a doubt. In actual fact the atmosphere when we arrived at the stadium, there were kids lining the streets, it was really friendly.

“That was different with the taking of the knee but that felt like inherited thinking to me. We do it to try to educate and I think young people can only be influenced by older people.

“I have no idea why people would choose to boo that gesture and very often young people can’t know why they’re doing it so they’re being influenced by older adults – everyone knows what we believe and what we stand for.

“What I would say is, I hear that still in our stadiums as well. That’s why we do it and continue to take that stand and we will keep doing that as a team.”

England’s Nations League game at home to Italy next weekend will also be played behind closed doors, at Molinuex, following the behaviour of supporters ahead of the Euro 2020 final defeat to the same opponents last summer.

The PA news agency understands there is expected to be an attendance of between 2,000-3,000 at the home of Wolves as the Football Association welcomed applications from England Football-accredited under-14 clubs within a 50-mile radius of the stadium.