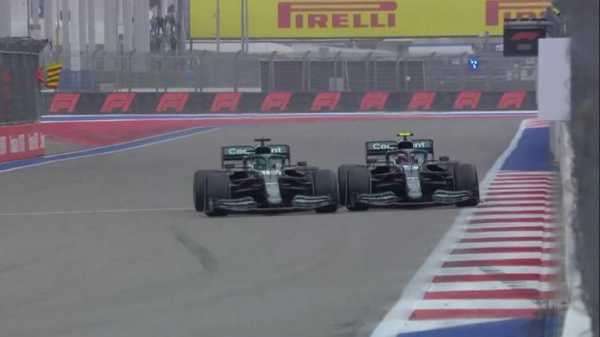 We heard the angry radio messages from Sebastian Vettel over the weekend – frustrated after just missing out on Q3, and then again at the end of the race as Aston Martin “gambled on the wrong option” by opting not to initially pit in the rain. That ultimately cost both drivers top-10 finishes.

Speaking of frustrated drivers, look no further than Pierre Gasly. The Frenchman said the team “missed two big opportunities” in Sochi, first in qualifying when he was kept out on used tyres and missed out on what looked a definite Q3, and then in the race as he was kept out on the slicks. “A weekend to forget”, added Gasly.

Esteban Ocon just didn’t get going at the Russian GP. Slower than team-mate Alonso throughout the weekend, he wasn’t in contention for points before the rain, nor was he afterwards. Not great.

Oh, Charles. All the great work that brought him from the back of the grid – aided by an absolutely epic first lap that brought him up to 12th from 19th – into the top-eight was undone by choosing to stay out longer than anyone – minus Norris – in the wet.

Sunday’s race was always going to be difficult for Antonio Giovinazzi after being hit at the first corner – and it was made even harder by the fact his radio didn’t work and so didn’t have any communication through the whole race. “I couldn’t talk to the pits about the tyre change at the end of the race,” said Giovinazzi. Not ideal!

He may have a new contract for 2022, but this is really a desperate run of form for rookie Yuki Tsunoda. In Sochi, he said he “struggled with the balance of the car all weekend”, and he finished on track only ahead of a Haas.

Well off the pace in qualifying, Nikita Mazepin made a surge on the first lap to rise to 13th… but that was as good as his home race got. He finished plum last, and with a black and white warning flag for more aggressive defensive driving.

Nicholas Latifi is showing signs of improvement in the Williams but had a compromised weekend due to his engine penalty, and then spun off on the slicks in the wet and had to retire.

Mick Schumacher can be pretty pleased with his Russian GP despite not finishing it; he was close to Q2 in the wet qualifying and then showed decent pace in the race before retiring with a hydraulic issue.