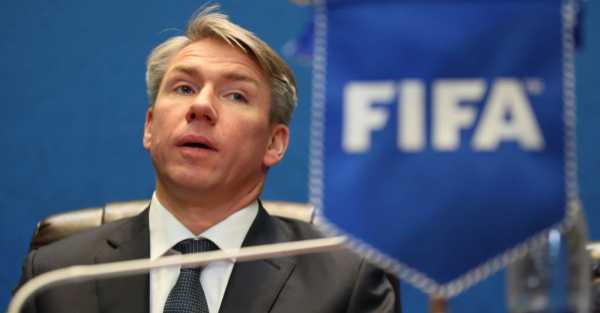 Russia insisted they had “every right” to attend FIFA Congress in Doha despite the country’s invasion of Ukraine.

Russian national teams and clubs have been suspended by FIFA and UEFA, but the ban does not apply to the Russian Football Union.

That has allowed Russia to declare an interest in hosting Euro 2028 or 2032 and to attend world football’s biggest annual gathering of national associations, and Alexey Sorokin of the RFU was unapologetic over his presence in Doha.

“We are not hiding. We have every right to be here,” he said.

The RFU has appealed to the Court of Arbitration for Sport against the ban, although it is thought very unlikely they can now participate in the World Cup with Poland having qualified from the play-off path which contained Russia.

“We find it kind of strange that the Russian team was not allowed to play in this (World Cup) qualification,” Sorokin added.

“It’s strange. We feel that our football players and football lovers have nothing to do with (the invasion).”

There were no public comments from any other associations questioning the RFU’s right to attend.

Ukraine football federation president Andriy Pavelko delivered an emotive video message to the Congress, stating: “During this period we have regularly received sad news of the deaths of members of the Ukrainian football community.

“They have been killed by the aggressors’ rockets from one of the biggest army in the world.

“Football has taken a back seat in our country. Ukraine has presented three Ballon d’Or winners to football and there could have been more among these children killed in this war.

“It has created a deep crisis and I express my gratitude to the associations who have supported us and helped us especially the young players to leave their country to escape the war.

“Many of you have children and grandchildren and understand how high the price has been to restore peace for Ukraine.

“We are sure we will fight back and we will win, because we have the truth behind us. But our children have suffered terrible injuries. Perhaps football will help them forget the horrors of war.

“I believe every word, prayer and action in support of Ukraine and against the war can stop it.

“We have no right to remain silent. Let there be no air-raid alarms in our cities, instead the songs of fans. Let the battles take place not in the streets with weapons but in crowded stadiums in fair football duels and let the spectators in the stands explode when their favourite team scores a goal, not the bombs. We believe it will be so.”

In response to Pavelko’s address, Sorokin said: “I have worked with him for a very long time and we regret that he has these emotions.

“It is difficult for them, we understand that, but I’m here not to discuss politics or military activities or anything, I am here in the FIFA Congress.”

FIFA president Gianni Infantino defended the RFU’s presence in Doha, and added: “If we don’t have occasions to bring people together like a Congress, then we should stop and go home.”

He used his Congress speech to implore Vladimir Putin, the Russian president who presented him with an Order of Friendship medal in 2019, to engage in dialogue to end the war.

“Now that we are seeing light at the end of the tunnel (on the Covid-19 pandemic), what happens now? War. War with the fear of a global conflict,” the Swiss said.

“It did not create a lasting peace. But what I want to say now is that once this terrible conflict is over, and all other conflicts around the world, hopefully football can play a small part in rebuilding relationships, in establishing peace and understanding.

“My plea to all of those who have some power, in important political positions, please stop conflicts and wars. We must engage in dialogue even with your worst enemy.

“We have to learn again to live together. This Congress is a testimony of that.”