Ronan O’Gara believes former Munster and Ireland team-mate Paul O’Connell is testing the water for a career in coaching with his first full-time job as a forwards coach at Stade Francais. 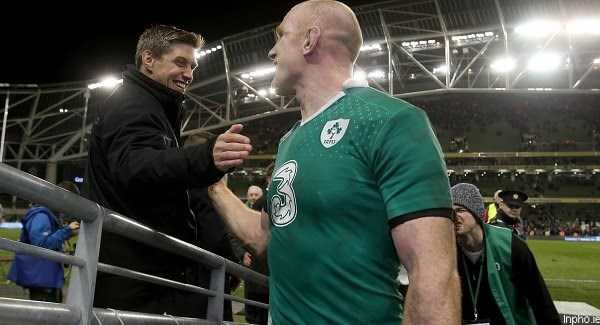 The French Top 14 campaign begins today with O’Connell’s new Parisian club away at Paddy Jackson’s newly-promoted Perpignan, the 38-year-old former Ireland skipper having joined head coach Heyneke Meyer and a backroom team also including fellow Munsterman Mike Prendergast as backs coach. In moving to France, O’Connell has followed O’Gara, who cut his coaching teeth across the capital at Racing 92 and is now a Super Rugby-winning assistant coach at the Crusaders in Christchurch, New Zealand.

“It grabbed me a long time ago, I love it. It gets stronger the longer you’re in it. There’s a great fascination on the journey too. It’s not all about getting to coach Munster or Ireland. That will only happen if you’re good enough. There’s great satisfaction in what I’m doing at the minute”

O’Gara returns with his family to Paris next week for the start of the school year before heading back to New Zealand in early 2019 for another season at the Crusaders, and he remains a fan of French Top 14 rugby, particularly once the play-offs come around. “I wouldn’t swap ‘Le Barrage’ for anything,” he added. “It’s frightening.”

Whether O’Connell will be similarly enthralled remains to be seen and O’Gara said: “Ask Paul that, he doesn’t need me speaking for him. I just think Stade are incredibly lucky. You’re talking about a forward who has an incredible knowledge of all aspects of the game. People associate the ‘fear of God’ with Paulie but that is a complete misconception. The guy is highly-intelligent and highly-driven and great craic, which is important too, because if you wanted to go coaching with him you’d want to enjoy his company.

“They weren’t ruthless in Leinster’s 22. The game was there and Teddy Thomas on a big turning point runs into touch when they could have managed the game a little better. While over on this side of the world it was probably ‘Leinster were far better than anyone’. They weren’t. It was a dog of a match and it was very close. So they (Racing) aren’t that far off it. They put all the eggs in the basket and as a result they flopped in the Top 14.

“It’s going to be an unbelievable Top 14 this year. Stade Francais have the biggest budget, Clermont have to reply after their brutal season. Toulouse have a big budget, Montpellier, Toulon. There’s unbelievable players. You’ve Seta Tamanivalu and (Semi) Radradra gone to Bordeaux, that’s worth the admission fee alone going to watch those two boys play.”