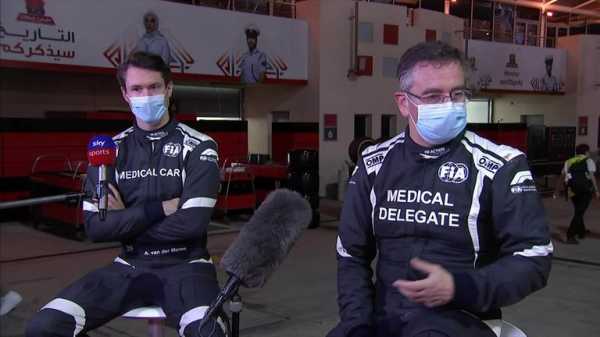 The first responders to Romain Grosjean’s horrific Bahrain GP accident have detailed his dramatic rescue and the “crazy” fire-gulfed scene, with FIA doctor Ian Roberts and Medical Car driver Alan van der Merwe telling Sky Sports that they had to “think on their feet” to help save Grosjean’s life.

Grosjean crashed heavily into barriers on the first lap of Sunday’s race – with his Haas car then ripped in half and bursting into flames – but has avoided major injuries in one of the most miraculous escapes in Formula 1’s history.

Roberts and Van der Merwe have been credited with being huge factors in that escape, having arrived quickly on the scene in the Medical Car before rescuing Grosjean from the fiery wreckage. 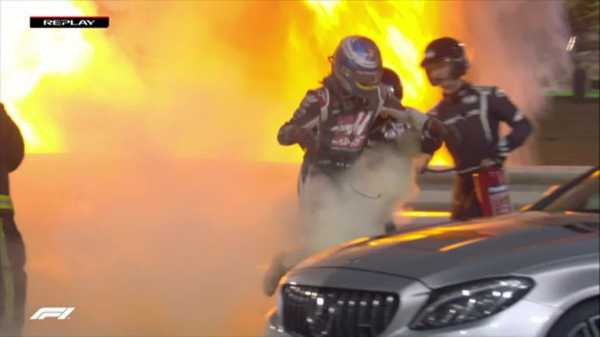 1:24 Warning: Video shows Romain Grosjean walking away from an inferno after first lap crash in the Bahrain Grand Prix

Here’s what they had to say to Sky Sports F1 after the Bahrain GP:

Describing the scene and whether they could ‘prepare’ for it

Dr Ian Roberts, the FIA’s deputy medical delegate: “First lap, as normal we were following [the cars] around. There was just a massive flame and as we arrived, it was a very odd scene, we’d got half the car pointing in the wrong direction and then just across the barrier, a mass of heat.

“Just to stop and then looking to the right, at that point I could see Romain trying to get up. We needed some way of getting to him, and we had the marshal there with an extinguisher, and the extinguisher was just enough to get the flame away. Romain then got high enough for me to reach over and pull him over the barrier.” 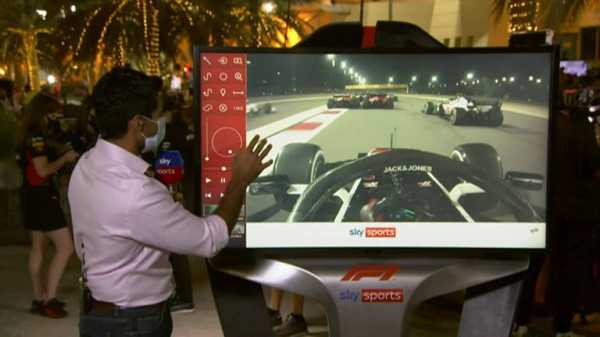 2:42 Karun Chandhok was at the SkyPad to analyse Romain Grosjean’s horrifying accident which took place in the opening moments of the race in Bahrain

“I’ve not seen fire like this in my stint as the Medical Car driver,” he said. “A lot of it is new and unknown territory, so we can only be prepared as our own ideas.

“We do a lot of checklist and scene prep, talking about scenarios, but this was crazy – to get there and see one half of the car, with the other nowhere to be seen, and a huge ball of flames.

“So you’re thinking on your feet. Preparation only gets you so far and after that there’s instinctive and quick thinking.”

Asked what the first thing he said to Grosjean after rescuing him, Roberts said: “I told him to sit down.

“Obviously he was very shaky. His visor was completely opaque and in fact, melted. I had to get his helmet off just to check that everything else was OK. He’d got some pain in his foot and his hands. 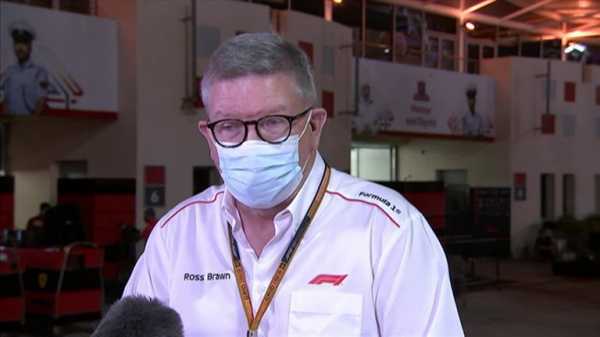 “From that point we knew it was safe enough to move him around into the car just to give him a bit more protection, get some gel onto his burns and then get him into the ambulance off to the medical centre.”

But were they worried about serious head injuries after the impact?

“Our first thought was flames, smoke inhalation, airway issues,” explained Roberts. “But in fact, nothing went up into his helmet – we’ve had a look at that as well.

“But that certainly looking at him clinically, we were quite happy with him from a life-threatening injury point of view. Then it was just trying to make him comfortable from the injuries that we could actually see.” 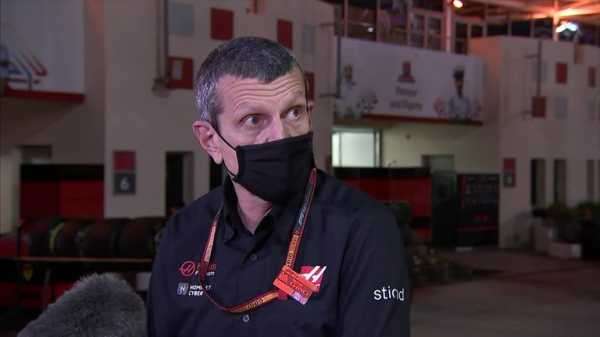 3:38 Haas team principal Guenther Steiner says that Romain Grosjean will stay in hospital overnight but that it seems nothing is broken

‘Grosjean did a huge amount’

Van der Merwe said “teamwork” was key to helping Grosjean. “Ultimately Ian has to rely on me, and vice versa,” he said. “Today, everybody did their bit.”

And, he added: “Even Romain, Romain did a huge amount. The fact he was able to get out of that himself, the fact that his shoe came off, these small things… one of things changed and it could have been a very different outcome.

“Today, all the teamwork, all the prep, it feels worthwhile.”