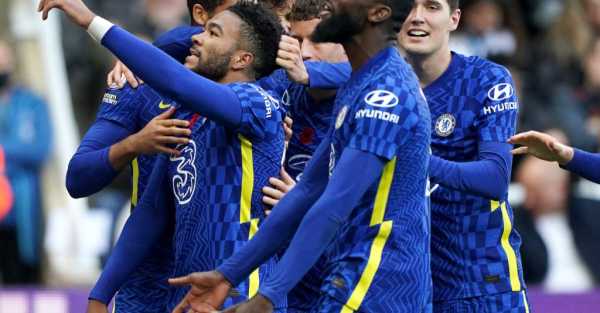 Reece James crashed home a second-half double as Chelsea beat Newcastle 3-0 at St James’ Park to extend their lead at the top of the Premier League table.

England defender James produced a brilliant finish midway through the second period and then made it 2-0 by driving home a rebound before Jorginho sealed victory by converting a late penalty.

The Blues moved three points clear at the top with their fourth-successive Premier League win.

Defeat for managerless Newcastle saw them equal their longest winless run at the beginning of a top-flight season of 10 games, which was set in 1898 and 2018.

It was not the way interim-boss Graeme Jones wanted to hand over the reins, with Newcastle expected to appoint a permanent replacement for Steve Bruce before next week’s trip to Brighton.

Jones’ side made life difficult for Thomas Tuchel’s European champions, but they ran out of gas as Chelsea extended their unbeaten league run on the road this season to five matches.

Newcastle’s game-plan initially proved effective as they stifled the life out of Chelsea in a goalless, uneventful first half.

The Magpies were happy to let Chelsea have the ball, sitting deep and looking to hit them on the counter and were penned in for most of the first 45 minutes.

The home side’s best first-half chance came in the second minute when Ryan Fraser fired the ball across the face of goal, but nobody was close enough to get on the end of it.

Chelsea’s Hakim Ziyech thought he had scored with the game’s first shot on target in the 29th minute, but his effort was quickly ruled out for offside.

Ziyech should have given Chelsea the lead soon after when left unopposed on the left edge of the six-yard box, but he skied James’ ball over the crossbar.

Newcastle did all they could to slow the game down. Goalkeeper Karl Darlow was told to get a move on and Matt Ritchie was booked by referee Paul Tierney for delaying a throw-in, both before the interval.

The away side went close to breaking the deadlock early in the second half when Ziyech’s shot deflected off Jamaal Lascelles on to a post.

Jorginho then fired over and Chelsea’s frustrations were clear when N’Golo Kante – making his 200th Premier League appearance – and Ziyech were booked for rash challenges within the space of a few minutes.

But the visitors broke the deadlock in emphatic style in the 65th minute. Callum Hudson-Odoi’s cross fell to Reece on the right edge of the area and he slammed home a left-footed finish from a tight angle.

The visitors’ relentless approach was further rewarded three minutes later when Jorginho converted from the spot after Kai Havertz was tripped by Darlow.