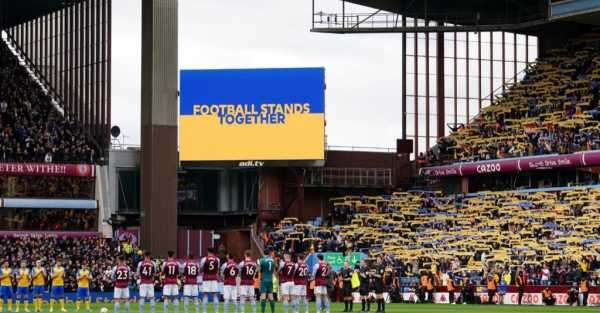 The Premier League is close to terminating its broadcast contracts in Russia following the country’s invasion of Ukraine, according to reports.

But Sky Sports and the Telegraph claim lawyers have been given the go-ahead to start the process of ending broadcast agreements with Russian partners and an announcement could come in the next few days.

The Premier League declined to comment on the situation when contacted by the PA news agency.

The Russian rights for the current season are owned by a company called Rambler, and broadcast on streaming platform Okko. Match TV – owned by energy giant Gazprom – is then set to start a six-year deal from 2022-23.

Commercial deals with Russia in all sectors are under scrutiny, and Masters told the Financial Times Business of Football Summit in London: “With regards to our broadcast contracts in Russia, clearly they’re under review.”

FIFA announced a temporary change to its statutes on Monday evening allowing foreign players based in Ukraine and Russia to suspend their contracts until the end of June and move elsewhere without penalty.

Unless explicitly agreed otherwise, the employment contracts of foreign players and coaches with clubs affiliated to the Ukrainian federation will be deemed automatically suspended until the end of the season.

Foreign players and coaches in Russia will have the right to unilaterally suspend their contracts until the end of June, should Russian clubs not have reached a mutual agreement to suspend the deal on or before Thursday.

“Players and coaches will be considered ‘out of contract’ until June 30th, 2022 and will therefore be at liberty to sign a contract with another club without facing consequences of any kind,” the statement from football’s world governing body read.

Such players will be able to register in another country even if the registration period in that country is closed, provided they are registered on or before April 7th. A club may sign a maximum of two players under this exemption, FIFA said.

FIFA said minors fleeing from Ukraine to other countries due to the armed conflict would be exempt from the rule preventing the international transfer of players before the age of 18.

World players’ union FIFPRO and the World Leagues Forum had written to FIFA last week calling for foreign players in Russia to be allowed to unilaterally terminate their contracts without consequences.

FIFPRO believes FIFA’s ruling does not go far enough, saying in a statement: “The decision by the bureau of the FIFA council to allow foreign players to only suspend their contracts and thus only temporarily leave Russian clubs is too timid.

“It will be hard for players to find employment for the remainder of the season with uncertainty looming over them and, within a few weeks, they will be in a very difficult situation once again.

“It is unsatisfactory even for players who are tied to short-term contracts in Russia – where contracts typically end in December – and who may not want or be able to return after June 30th, 2022.

“For players, coaches and others in Ukraine, we consider it essential that UEFA and FIFA widen professional football’s response to the war by establishing a fund to support all those in the industry who are affected.”