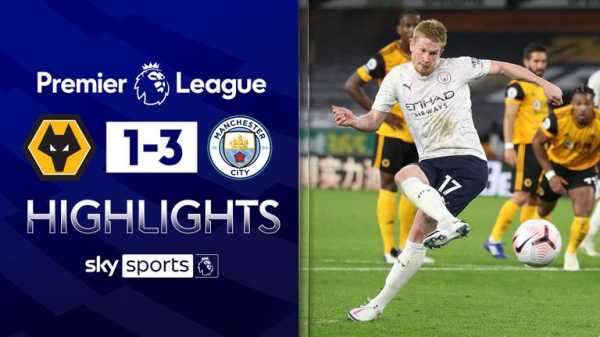 2:45 FREE TO WATCH: Highlights from Manchester City’s win over Wolves in the Premier League.

Given Manchester City’s pre-season problems that robbed them of seven first-team regulars for their first Premier League game of the season, a trip to Wolves was just about the last fixture that Pep Guardiola would have wanted. But City produced a solid performance in winning 3-1 at Molineux against a team that took six points off them last season. This was a good victory.

City were sharp in the first half with Kevin De Bruyne, the man of the match, winning and converting from the penalty spot. When Raheem Sterling set up Phil Foden for the second, the game looked over – Guardiola’s side were pressing when out of possession and purring with the ball at their feet.

The City boss still wants a new centre-back and perhaps that was a factor in his selection – going with Rodri and Fernandinho protecting the back four. Wolves have created more chances from fast breaks than any other team over the past two seasons and that was an issue for City last season – conceding twice as many chances from those situations as they had in either title-winning campaign.

The pair did an impressive screening job, particularly in that first half, with Guardiola slapping hands with Fernandinho at one point after another potential Wolves counter-attack was shut down. 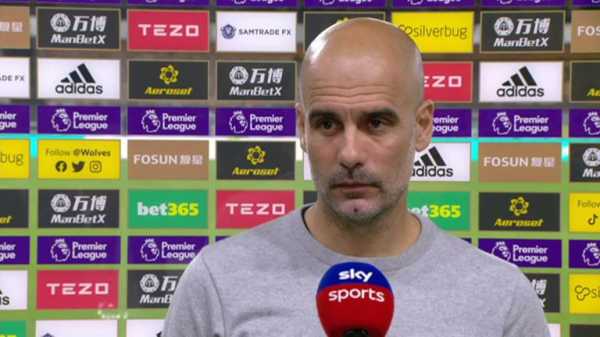 2:01 Manchester City manager Pep Guardiola says it was important to start the season well with a 3-1 win over Wolves.

But it was the second-half wobble that served as a reminder of how delicate the balance can be. Midfielders taking that little bit longer to close down and Benjamin Mendy being that bit more reluctant to put in a tackle after his yellow card was all it took for Wolves to start running at the back line. The home side had excellent opportunities to pull one back long before Raul Jimenez did so.

But City managed the final quarter of an hour of the game well, restricting Wolves from building any momentum. The equaliser never looked likely and when Jimenez did attempt to break in the 86th minute, there was Rodri, pulling a shirt and kicking the ball away, taking his booking. This was a mature performance – a secure performance as De Bruyne called it. They will need many more. 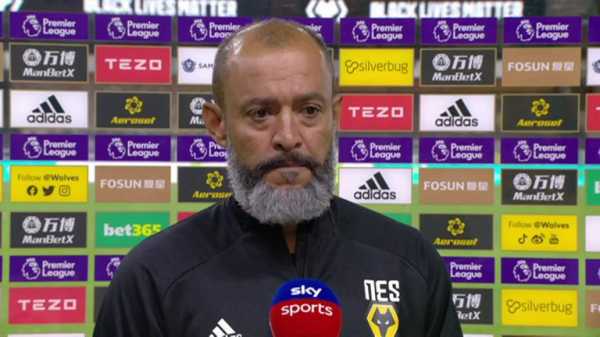 3:13 After losing 3-1 to Manchester City, Nuno Espirito Santo would not be drawn on reports suggesting Wolves are close to signing Nelson Semedo but admits his side does need additions.

The sale of Diogo Jota has put the spotlight on his countryman Daniel Podence, the man asked to partner Jimenez in attack against City, and the diminutive forward produced a moment to remember to give his side hope in the second half. De Bruyne was a worthy man of the match but he did not escape his trip to Molineux without one tough experience – nutmegged by Podence for Jimenez’s goal.

After some nifty footwork against Sheffield United at Bramall Lane helped to set up the Mexican for the opener there, this assist took Podence’s tally for the season to two already. That is twice as many as Jota managed in 34 Premier League appearances last season and this display will offer further encouragement that his successor in Wolves’ attack could add greater potency this year.

Villa Park hasn’t been kind to Sheffield United this year.

While the ‘goal that wasn’t’ in June’s meeting ultimately meant more for Villa’s survival hopes than it derailed the Blades’ splendid first season in the Premier League, John Egan’s sending-off was the pivotal moment in United’s losing run in the league being extended to five successive matches. A stumble has become a slump.

Not, however, that Chris Wilder’s side performed poorly. Despite being a man down for 80 minutes, United restricted their hosts to just two shots on target. And the box-to-box passing move which resulted in their missed penalty was sublime. They may be losing matches, but they haven’t lost confidence. They still look like they belong at this level.

Sooner or later, surely, Sheffield United will come good again. Then again, given that their upcoming fixtures against Leeds, Arsenal and Fulham are followed by engagements with Man City, Chelsea and Liverpool, they had best hope it is sooner. The need to arrest the slump is fast becoming critical. 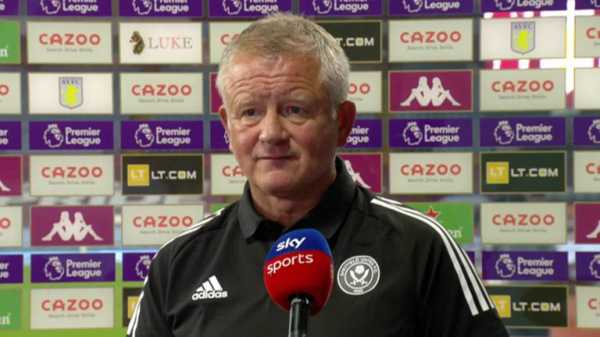 What doesn’t help are soft decisions and hard-luck stories. Given referee Graham Scott was upwards of 30 yards away from the incident that saw John Egan deemed to have denied Ollie Watkins a goalscoring opportunity, and the two players involved had their backs to him, there must have been a large element of guesswork involved in his decision.

“There’s no doubt there’s a tug on the shirt but my problem with it is how sure is the referee that it’s a red card?” noted an unimpressed Jamie Carragher. He is far away, the linesman didn’t get involved and actually gave a throw-in.

“How can the referee be so sure when he is so far away? If that was given a yellow card, there wouldn’t even be a discussion.”

But when Sheffield United are at Villa Park, there’s always a talking point.

So who was fouling who? 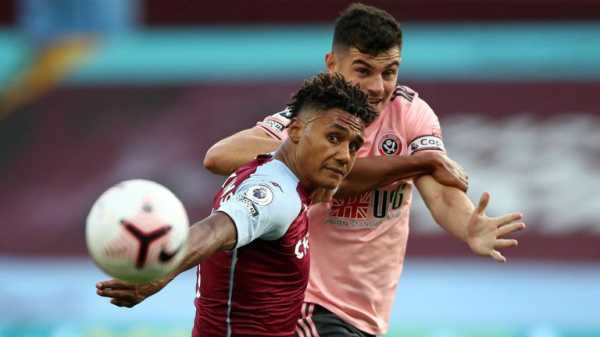 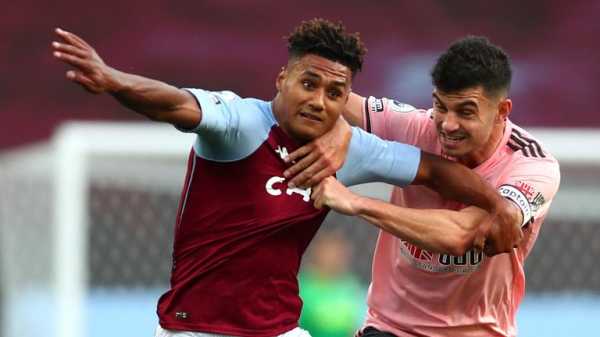 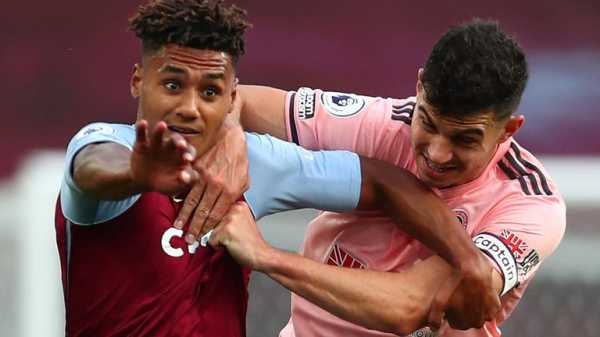 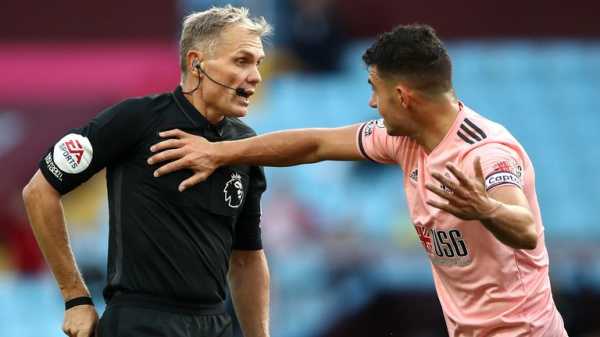 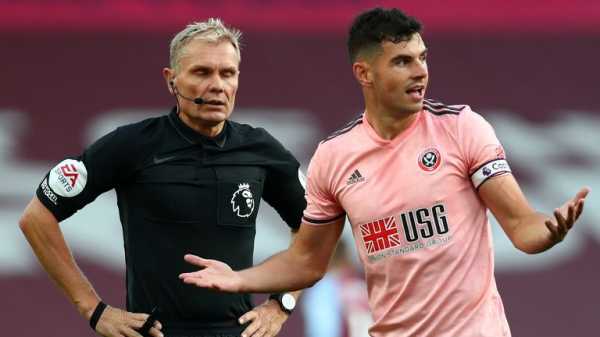 Job done for Villa, but only just 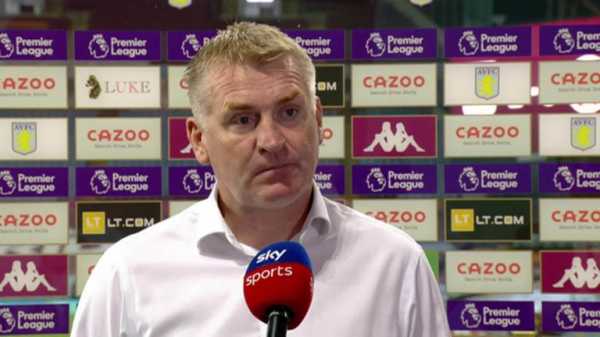 2:47 Aston Villa manager Dean Smith says a win and a clean sheet on their first game of the season is very important for the team and was impressed with his new signings’ performances.

It was by no means pretty from Aston Villa, but they eventually got the job done against the 10 men of Sheffield United.

John Egan’s early dismissal certainly turned the game in Villa’s favour, but it wasn’t all plain sailing for Dean Smith’s side as they struggled to break down the Blades’ organised defensive system.

Jack Grealish wasn’t his usual creative self, while new signing Ollie Watkins didn’t get much change from Sheffield United’s centre-backs. They also needed another debutant in Emiliano Martinez to make a superb penalty save to keep the scores level in the first half. 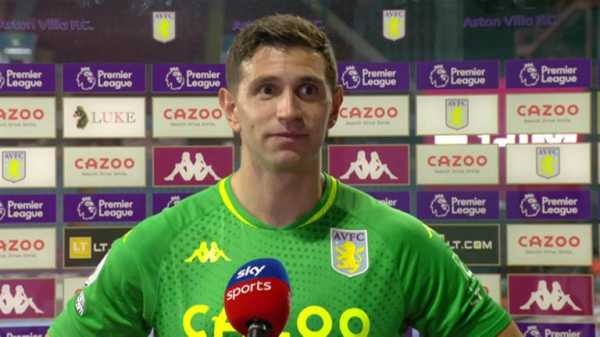 2:15 Emi Martinez proved to be one of Aston Villa’s heroes in their win over Sheffield United by saving a penalty on his debut in their 1-0 win in the Premier League.

But they did persevere and in the end Tyrone Mings and Exri Konza combined to get the job done.

The real positive is the continuation of Villa’s recent good form at home. They have now won three consecutive Premier League games at Villa Park for the first time since October 2007 under Martin O’Neill.

We have already seen plenty of away wins so far this season, so, in a campaign where home form could prove to be crucial, Villa will want to continue their good recent form at Villa Park.