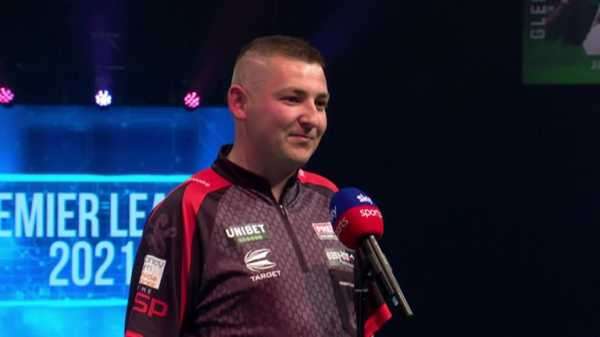 2:45 Nathan Aspinall was delighted to have the fans behind him after he beat Michael van Gerwen on Night 13 of the Premier League

To look out from the press balcony since July has been to see a shell of an arena, like many in sport. Staging crews have done brilliantly to set up our favourite theatres, sound engineers have done superbly to generate the right kind of noise, but it’s not the same.

Sport needs its crowd and on arrival at the Marshall Arena, the tables with 180 signs were back out, the music was being tested a bit louder as the floor manager and TV teams ran through the walk-ons.

Fans were arriving in dribs and drabs throughout Monday, milling around the restaurants and the shops on the industrial estate in Milton Keynes that has seen more darts played than anywhere else during the pandemic.

“It’s been our home really for the last 16 months – they understand us and what we need and have needed, we understand them,” PDC chief executive Matt Porter told Sky Sports.

“They deserve to have the first crowds back for everything they have done for the sport.”

Listening to the players over the first two days in Milton Keynes, there’s a valid argument to be had that no sport needs its crowd more than the arrows. They set the tone, they create the environment and in the case of the Premier League, they provide the backdrop to the first half of the darting year. 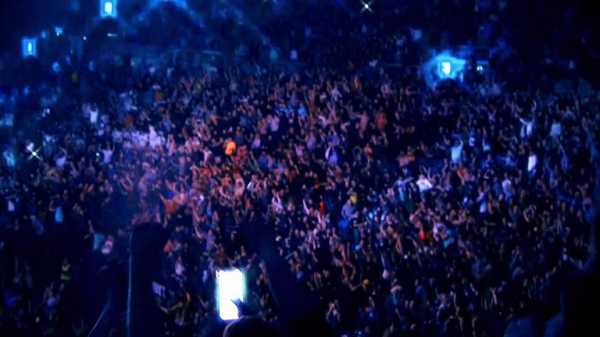 1:09 Fans return to the Premier League Darts on Night 13 in Milton Keynes

Usually, a 17-night roadshow taking in some of Europe’s biggest cities and atmospheric arenas, the competition has fallen into line with sport’s adaptation to the pandemic, so a second year in succession limited in crowd numbers and reach is not to be underestimated in terms of impact.

The cities have got bigger as Colchester, Taunton and Kidderminster in 2005 have been swapped for Dublin, Rotterdam and Berlin in 2019 as the Premier League showcases the very best of the sport and has set the tone for the European Tour, the World Series and the World Cup.

“The staff have a spring in the step, the players are excited to play in front of crowds again and it caught them a little bit by surprise but it’s the spectacle and the opportunity to entertain people and enjoy yourself.

“Whether you are on the stage or in the crowd I think people have been enjoying themselves. I think people are grateful to have the opportunity to go and watch any sort of live event at the moment.

“Everyone understands what is asked of them, things they are getting more used to from restaurants, pubs and things like that – ultimately there are no surprises and people are coming to enjoy themselves.

If the players looked a little nervous at the new ‘new normal’ it was with good reason, and likewise for those lucky enough to have a ticket and to be in attendance.

Fancy dress was in short supply, there was little in the way of mingling, other than to go to the toilet and it took a while for the vocal cords to loosen and the singing and cheering to commence – in fact there was an eerie silence as Gary Anderson and Jonny Clayton toed the oche. 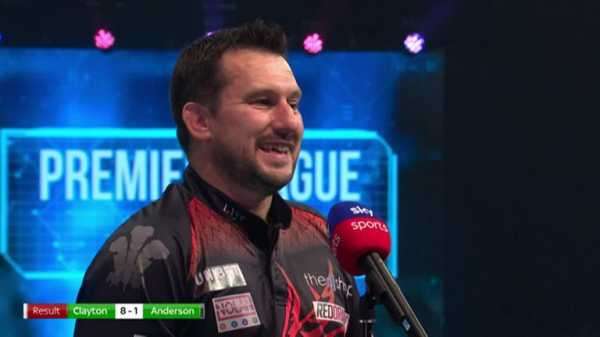 1:26 Jonny Clayton was delighted to secure a 8-1 victory over Gary Anderson in front of the fans in Milton Keynes

Starting a song was tricky, early shouts of encouragement were rather lone voices as the crowd waited for their cue from the players rather than setting the tone, and the players likewise.

Gary Anderson did his bit, firing in a couple of maximum 180s in the opening leg that drew the first of the hearty cheers and as everyone began to relax, the crowd of more than 600 began to play their part in the festivities.

It was fitting that Clayton, who has thrived over the last 12 months, claimed the first victory of the night and when ‘Chase the Sun’ greeted the winning double everyone was on their feet again.

“I was a bit nervous backstage but it was brilliant to have these fans back, and to perform well was all I wanted,” Clayton said in his on-stage interview.

“I am chasing wins, and if I do a job hopefully I am in the top four – and in front of a brilliant crowd, in a great atmosphere I done a job.” 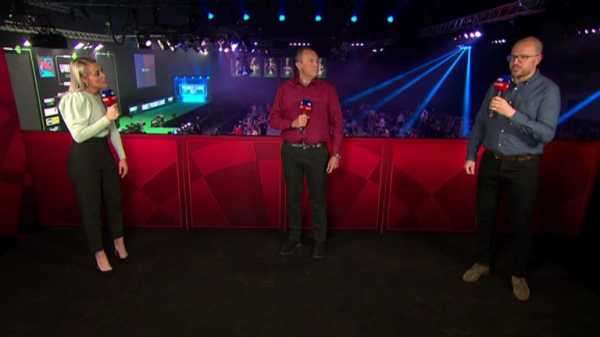 2:57 Wayne Mardle and Mark Webster review the talking points from Night 13 in the Premier League in Milton Keynes

Warming to the task, the first chorus of Stand Up If You Love the Darts came in game two – perhaps spurred on by Dimitri Van den Bergh’s crowd-pleasing walk-on.

Aspinall’s arrival was followed by the entrance of Michael van Gerwen and the lights dipped and the green filter welcomed the five-time Premier League champion. By the end of the night, the crowd were serenading Wayne Mardle, Mark Webster and Emma Paton to give them a wave from the Sky Sports balcony. 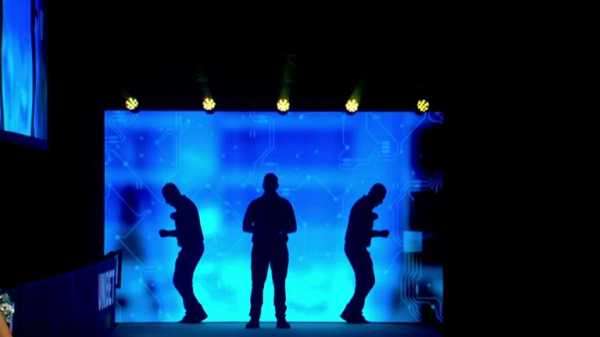 Night Two took a little less longer to get going, fancy dress was a little more plentiful, the chorus of Stand Up If You Love the Darts came in leg two instead of match two, the walk-ons were welcomed a little louder, the 180s cheered a little heartier and there was even time for a Boring, Boring Tables rendition.

After a couple of pantomime villain boos on opening night, Van Gerwen was cheered to the rafters on Tuesday evening as he registered his first win in front of fans since last March. Oh Michael van Gerwen was the loudest song of the week so far has he roared his way past old rival Gary Anderson.

But even the five-time Premier League champion, and three-time world champion, admitted to a few more nerves than usual.

“It has been a really long wait, 16 months, and it was a bit unusual, it took a while to get the flow going and get used to it again,” Van Gerwen told the press after returning to winning ways.

“Even though the crowds are a little bit smaller it is a massive step forward after a horrible time.”

That night in the Albert Dock when MVG beat Gerwyn Price came 24 hours before the country went into its first lockdown, and while there have been fleeting glimpses of crowds – on the European Tour, at the World Cup and one lonesome evening at Alexandra Palace 24 hours before the next lockdown kicked in – this feels like tangible progress for the sport.

After two nights in Milton Keynes it feels like a corner has been turned, the players, and the fans, have loved every minute and they are only just warming up.

Those heading along for the final three nights should be treated to a battle royale as five players chase three places alongside Van Gerwen in the final, and on Friday a darts trophy will be lifted in front of fans once again.

The 2021 Premier League continues this week, with three more nights of action culminating with the Play-Offs on Friday, May 28. Watch all the action live on Sky Sports