The Philadelphia Eagles won their first Super Bowl title as they defeated the defending champions the New England Patriots 41-33 in a high-scoring thriller.

Over 1,000 offensive yards were piled up in Minnesota and it was the Eagles that came out on top and prevented 40-year-old Patriots quarterback Tom Brady winning a record sixth ring.

Jay Ajayi contributed 57 yards on the ground and became a Super Bowl champion just four months after he was stunningly traded by the Miami Dolphins.

The NFC Champion Eagles had been viewed as underdogs with New England seeking a third title in four years, and a sixth in 17, but back-up Philadelphia quarterback Nick Foles threw 373 yards and three scores, and even had a receiving touchdown in one of the craziest Super Bowls ever.

After both teams traded field goals to start, Foles and Alshon Jeffery’s 34-yard hook up, that saw the Philadelphia wide receiver make a grab at the back of the end zone, provided the first touchdown.

Ex-Patriot LeGarrette Blount’s 21-yard dash extended the Eagles’ lead to 15-3 before a Stephen Gostkowski field goal and James White’s rushing score, which came after Foles threw his only interception, reduced the deficit. 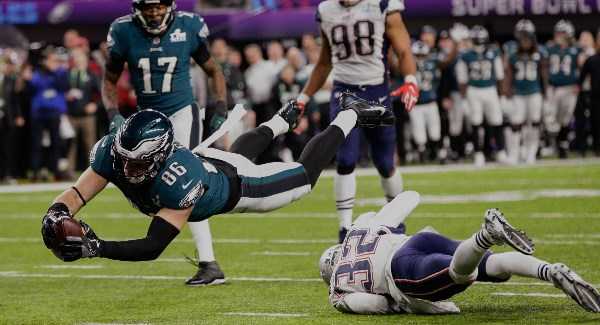 Yet Philadelphia would enter the interval 10 points up thanks to a play call in the final 40 seconds. On fourth-and-goal, the Eagles called a gadget play where the ball was snapped to Corey Clement, flipped to Trey Burton and then thrown to Foles, whose first career reception was a Super Bowl touchdown.

New England, down 22-12, had been trailing at half-time of last year’s Super Bowl and would fall 28-3 behind to the Atlanta Falcons then before completing an improbable comeback in overtime.

There was more emphasis on throwing to Rob Gronkowski in the second half and the tight end, who caught just one pass in the opening two quarters, snagged Brady’s first touchdown toss.

The Eagles fired back midway through the third quarter. If the Foles touchdown was creative, this Clement grab was controversial. Foles dropped another inch-perfect pass into his receiver’s hands but the ball appeared to come loose before his second foot went out of bounds.

A touchdown was awarded on the field and, after consulting video replays, the score stood.

New England would not go away, though. An Eagles pass rush that many thought would cause Brady problems was ineffective and he went over 400 yards passing, in the third quarter, with a 26-yard strike to Chris Hogan.

Jake Elliott’s field goal made it 32-26 at the start of the fourth quarter but Brady looked unstoppable, unflappable and untroubled.

His third touchdown, this one to Gronkowski, was added to by a Gostkowski extra point that gave New England their first lead. 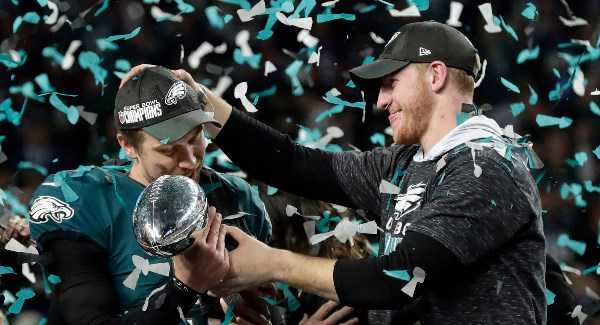 Philly’s failure to slow Brady resulted in them rolling the dice again on fourth down and Foles’ completion to Zach Ertz crucially continued the drive.

Foles continued to lead his team down the field and then into the end zone when he connected again with Ertz, who reached for the goal-line and saw the ball bobble up into the air as he went to ground.

At the end of a week where NFL commissioner Roger Goodell had said their catch-no catch rule needed a rethink, the crowd inside US Bank Stadium waited as a lengthy review process commenced.

Once again, the Philly touchdown stood, with Ertz adjudged to have held possession long enough to be deemed a runner, thus scoring the touchdown when he broke the plane.

That looked like being plenty of time for Brady to engineer another comeback, only for Brandon Graham to strip-sack the veteran and rookie Derek Barnett to recover the fumble.