Phil Healy is the only Irish athlete to make progress on the opening morning of the European Indoor Athletics Championships in Glasgow as everyone else in an Irish vest fell at the first attempt, though Sean Tobin did come close to qualifying for his final.

Healy had the fortune of being drawn on the outside in lane six in her heat of the women’s 400 metres, and took full advantage of it, starting tremendously and keeping out in front until the break of lanes at halfway.

The Waterford-based Bandon AC sprinter looked very impressive and led throughout, until she was reeled in over the final 20 metres either side by Italian Raphaela Boaheng Lukudo and Deborah Sananes of France. 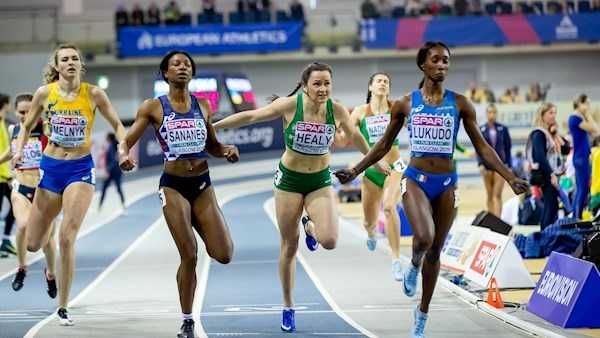 Healy’s time of 53.13, while solid, was short of her season’s best from January of 52.31, and with Lukudo winning in 52.99, Sananes second in 53.05, Healy was left waiting in the hot seat to see if she would progress among the fastest losers into tonight’s semi-finals.

She had to hang on until the very last of the seven heats to learn that she had made it as the fourth of the additional four, with home favourite Eilidh Doyle among those going through, but outside of the automatic qualifiers.

Speaking after her race, but before learning of her qualification, Healy said: “I led for the whole thing.

“I went out in 24.3, and thought that the French girl (Sananes) wouldn’t come out at me at the beginning.

“It’s hard to see where you are in lane six.

“Disappointed I didn’t get an automatic Q because that’s the main aim, and obviously that gives you a better lane draw.

Healy though has received an awkward draw off the back of this morning’s result – she’ll be starting from lane two in the semis tonight at 8:45pm, a position that has already done for Irish hopefuls in the opening session at the Emirates Arena.

Sophie Becker missed out elsewhere in the 400m, finishing fifth in her heat in 53.99 seconds as the most successful nation at the previous Championships in Belgrade – Poland – took victory through European indoor and outdoor 4×400 relay gold-medallist Iga Baumgart-Wittan in 53.17.

Sean Tobin’s display in the 3000m heats was heartening, as a gutsy performance and intelligent running saw him come agonisingly close to making it to the final.

The Clonmel AC athlete, back in Ireland after a four-year spell at the University of Mississippi, came fifth in what was effectively a semi, surging through the field in the final lap. Usually floating around eighth and ninth place as the laps ticked by, Tobin accelerated dramatically over the final 200 metres, passing out four tiring athletes in that last lap.

However, he was unable to reel in the slowing Sam Parsons of Germany, who grabbed the fourth and final qualifying place in 7:55.60 by 0.67 seconds ahead of the Irishman in fifth, who recorded a season’s best 7:56.27.

Tobin said: “I saw the guys ahead and I was closing hard, getting around as many as possible.

“I was trying to close up to fourth spot, and just ran out of track really.

“When I look back at it, we had a plan for it, but it wasn’t enough.

“I probably should have moved a little earlier. With 400m to go, I was trying to get a move on, and at 600m as well but I kept getting pushed back.

“But I was fifth and it wasn’t good enough for the final.”

The former Irish schools champion feels frustrated about his time in the NCAA collegiate athletics system in the United States and thinks he has missed out on progressing in the European scene as a result: “I’m 24 years of age. We can still go forward, I’m working a lot.

“This is good experience and we can keep building. It stands to me, but I feel I’m a little bit delayed on this kind of experience.

“It’s much higher quality (here). You’re going to be racing against guys who are in world finals.

“At NCAAs, you’re going to be racing against a few guys that are very strong, usually three, but at Europeans, you never know who’s going to take a final.”

After his 1500m seventh-place at the 2015 Europeans in Prague, John Travers was looking to make an impact in Glasgow at double the distance, but was 14th in a 3000m semi claimed by the relentless Jakob Ingebrigtsen.

After winning his 1500m heat earlier in the morning, the 18-year-old European outdoor champion romped to a new European Under-20 record of 7:51.21, targeting a remarkable 1500-3000 double this weekend.

Travers was 14th in 8:12.54, and reported: “The first half was very good. I was controlling the race my way, the way that I wanted – keeping up and keeping in touch with the leaders.

“I knew it would take a PB to go through today but I knew it was in my grasp.

“It was all going well until 2K to go, and then I began to slow. Legs were beginning to feel like concrete.

“I can usually grit it out but I fell to pieces there unfortunately.”

Barr came home fifth outside the qualifiers, while Greene crashed into a falling athlete. 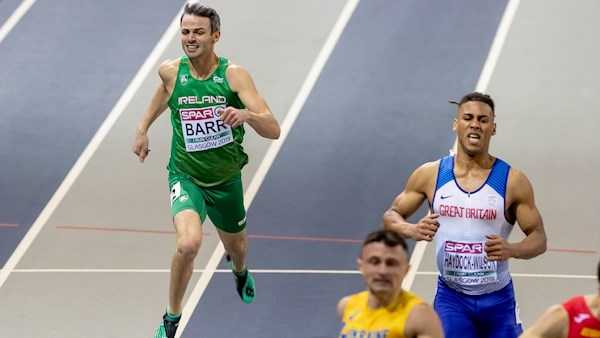 The European outdoor bronze-medallist was drawn on the inside in lane two, a major disadvantage over 400m indoors, due to the athletes breaking after the first 200m lap, and found himself right at the back at the bell.

Barr was always playing catch-up then in a somewhat unfamiliar event at this level as he finished fifth in his heat in 48.22 seconds, over a second outside his season’s best as European and world 400m hurdles champion Karsten Warholm took the honours in 47.15 seconds.

Warholm, still only 22, has the fastest time in Europe this season of 45.56 and is a prime candidate for gold.

Barr described the result as “very disappointing” and added: “It’s annoying I didn’t put myself in touch in the first lap.

“Live and learn I suppose. There’s a lot more to indoor 400m running than I remembered.”

The Waterford star opted to compete at these Championships for the first time due to the IAAf’s outdoor World Championships taking place over a month later than usual, in Doha at the end of September, which is Barr’s chief target of 2019.

Having been crowned Irish champion at Abbotstown a fortnight ago, Greene was eagerly looking forward to making an impact as one of seven major Championship debutants on the solid Irish team of 16.

However, from a lane two draw, the Galway City Harrier was bumped slightly as the athletes straightened out at the bell, pushing him back to fifth. An opening emerged as a collision barely thirty metres later saw Czech athlete Jan Tesar fall – however, Greene was right behind him and could only crash straight into the stricken Czech, ending his race.

Tesar did pick himself up and finish taking into account the possibility of disqualifications, but there were none, and he and Greene were both out.

The Galway City Harrier said: “It’s my first major Championship, so obviously I was very excited.

“Before I knew it, I was on the ground (with Tesar). I saw him go and obviously, if I had the chance, I would have jumped over him or went around.

“There was no opportunity, I had to go with him. It was almost as if we were falling together.

Siofra Cleirigh-Buttner went out in the opening round of the women’s 800m, finishing fourth in 2:06:00.

READ MORE: Declan Rice: England choice ‘toughest decision I have had to make so far’

The DSD athlete, currently looking for a training group for 2019, was eliminated in a race won by Latvian record holder Liga Velvere – who set that record in Athlone – as she clocked 2:05.33 in a tactical and somewhat slow contest.