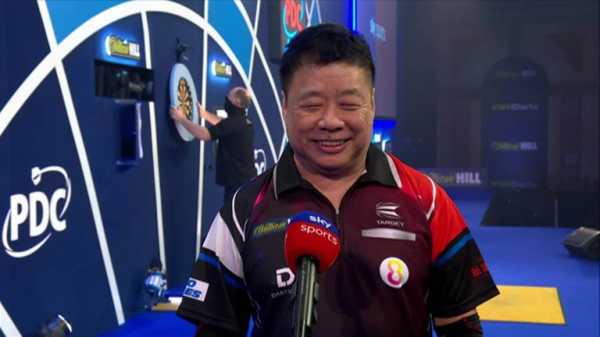 When 66-year-old Paul Lim was launching a World Championship comeback on Friday night, one man looking on was John Part – and not just in awe, as Darth Maple is taking inspiration from his former pairs partner.

Part is full of admiration and no little affection for ‘The Singapore Slinger’ and took to social media on his night off as Lim produced an astonishing comeback to see off former world youth champion Luke Humphries in the first round.

‘Cool Hand’ is 41 years Lim’s junior and as if to emphasise the point, when Lim returns to the Alexandra Palace stage on Tuesday night he’ll be taking on another former youth champion in Dimitri Van den Bergh.

Part is not just speaking in his capacity as a commentator. He is speaking as a player who still has designs on the big stage, even if the last of his three world titles was in 2008.

“He loves to compete and that’s like me too,” Part told the latest episode of The Darts Show podcast.

Darth Maple will be heading to Qualifying School in January and still feels he has what it takes to win a place on the PDC Tour. Watching Lim roll back the years to take on players who weren’t even born when he fired his memorable first televised nine-dart finish in 1990 adds fuel to the fire.

“I had to express how I felt about him and I tweeted him being a hero and an inspiration.

“The inspiration part is really about going forward for me, go to Q-School and give it a try – there’s no reason not to give it a try, that’s the lesson. If you work hard, why not?”

Lim is competing in his 25th World Championship, in both the BDO and PDC organisations, but has only once in all those years found himself beyond the second round. 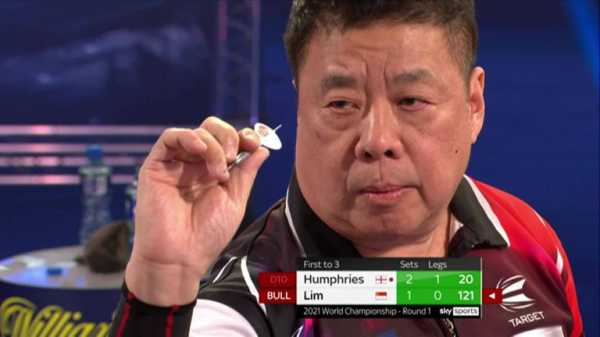 0:30 Lim rolled back the years with this brilliant 121 checkout against Humphries

If it were to happen closer to his 70th birthday, it would be fitting for a man who appears to be ageless. Van den Bergh will provide stiff opposition – the Belgian relishes the TV stage and will not be phased – but Lim’s action has stood the test of time.

“He has underachieved in the world championship. He reached the quarter-final once, back in 1990 on the back of the nine-darter, and since then it’s kind of nothing in the event,” said Mardle.

“I am surprised he hasn’t won more games because he has got a really consistent game – and there is something that I am going to bring up because it doesn’t need to be brought up and that is his age.

“The action has never let him down. There is minimal grip and tension and players know he is going to hang around – they know if they make a mistake he has the composure under pressure, the experience, and the nous to win matches, maybe not the event, well he’s not done it in all these years.”

Lim will be competitive. He has shown it over the last few years and doesn’t have to go too far back for even stronger memories.

Victory over Mark Webster at the 2018 tournament set up a date with Gary Anderson. Lim was the width of a wire away from a nine-dart finish, eight years on from the first to ever be recorded on TV. 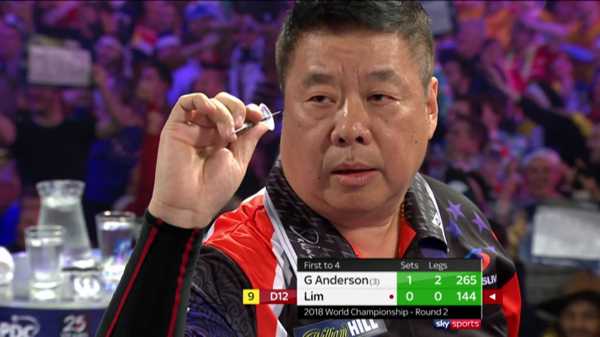 Part spent several years traveling the North American darts circuit with Lim, and that competitive edge is how the pair bonded, and it wasn’t always darts.

“We were playing partners for a couple of years in the 90s in the USA. We were playing a tournament in Michigan I believe. We were done but not leaving I believe, so we ate something and ended up at a mini-golf course playing.

“We couldn’t just play. We were playing $20 skins on a mini-golf course and there was another fella too. That’s how insane it was, we were just having fun!

“We had the same desire to win, we’re very different people I suppose, but when it came to darts, very much the same – never wanting to lose and always wanting to get on with it, it was good fun.

“As long as I’m alive, and there’s some kind of way to get in, I’ll try for a World Championship. To me, if you’ve got them worried then you’re competing. That’s the main thing.”

Part, now 54, is hoping to be competing again, but for now it’s all eyes on Lim who is proving to be more than competitive.

Darth Maple knows it, Wayne Mardle knows it and Luke Humphries knows it. Van den Bergh will be the latest to find out that oldest slinger in town is not here to make up the numbers.

Don’t miss a dart this Christmas thanks to the dedicated Sky Sports Darts channel all the way until January 4 with every session from the World Darts Championship, including the final on Sunday, January 3.

Check out daily Darts news on skysports.com/darts, our app for mobile devices and our Twitter account @skysportsdarts