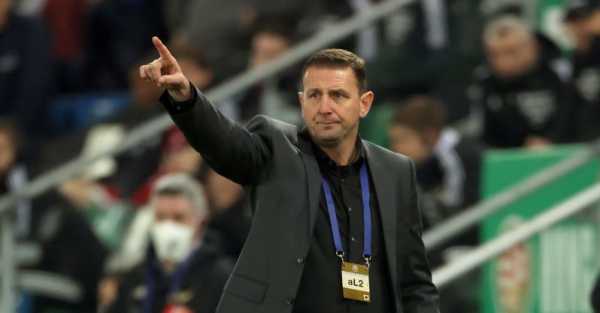 Ian Baraclough insisted Northern Ireland would not lose any confidence from suffering their first home defeat in a year after being edged out by Hungary 1-0.

Northern Ireland were on the wrong end of a result at home – and conceded their first goals at Windsor Park – since the United States won 2-1 in Belfast in March 2021, but this was a game Baraclough’s side could and perhaps should have won given the number and quality of chances they created.

Instead, a mistake from Niall McGinn gifted Roland Sallai with a 56th-minute goal and Hungary goalkeeper Denes Dibusz made a string of saves in a frantic finish to give the victory to the visitors.

“I felt it was a game where we could have come away talking about a win – the chances we created, how many times we worked the goalkeeper, good chances as well.

“On the balance of play, yes they had more possession, but their chances were from outside the box. I think I remember Bailey (Peacock-Farrell) making one save down to his left and that was all he had to do apart from pick the ball out of the net from a mistake of ours.

“That happens. It’s disappointing to make so many chances and not get something from the night… But it’s not going to burst our bubble. We can get together in June and go and do well in the Nations League.”

Steven Davis hit the outside of the post early on and the first half ended with McGinn bringing a save out of Dibusz.

Dion Charles wanted a penalty seconds after coming on as a half-time substitute, going down under a challenge from Adam Lang inside the area, but it was Hungary celebrating when McGinn under-hit a pass and Sallai rounded Peacock-Farrell to score.

“Just no blame on him,” Baraclough said when asked what he had told McGinn when he came off the pitch.

“He’s done enough for this country to be forgiven for something like that. Mistakes can happen. I say it to the players all the time – don’t be fearful of making mistakes.

“Tonight, Niall’s made a mistake and it ends up in the back of the net. It happens.”

Northern Ireland kept pushing, with George Saville, debutant Trai Hume, Shayne Lavery and Charles all bringing saves out of Dibusz late on as several substitutes made an impact.

“The biggest compliment I can pay the lads is it felt like a qualifier,” Baraclough added.

“It was a friendly but if you looked at that and not know what it was for you’d see a group of players desperate to win, desperate to get a result at all costs.”

Hungary manager Marco Rossi was indebted to his goalkeeper for securing the win days after a disappointing home loss to Serbia.

“I think that we have seen two different matches – one from the first minute until the 80th minute and then the last 10 minutes was a different match,” the Italian said.

Rossi handed Barnsley midfielder Callum Styles his first start after he made his international debut as a substitute on Thursday.

“Callum is a player that is able to play football,” Rossi said. “He is safe with the ball, he has a good first touch and a good personality. He is not scared of anything.”