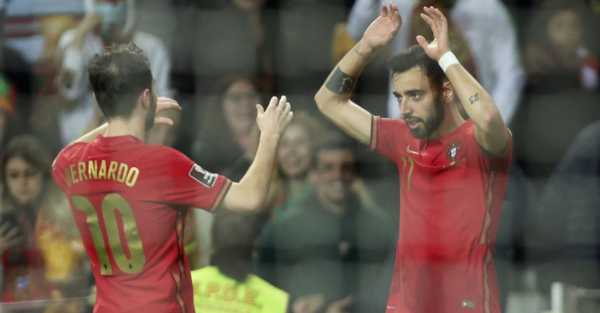 Bruno Fernandes scored twice as Portugal sealed their place in their sixth consecutive World Cup finals with a 2-0 win over North Macedonia in Porto.

Fernandes ended the visitors’ resistance with a 32nd-minute opener after being played in by a neat bit of skill by Cristiano Ronaldo.

From that moment on there was little danger of the North Macedonians repeating the heroics that saw them dump Italy out of the tournament with a dramatic late winner in Palermo last week.

Fernandes sealed his side’s passage to Qatar in the 65th minute when he finished off a lightning counter-attack by stroking the ball past keeper Stole Dimitrievski.

Poland joined Portugal in Qatar after securing a similarly straightforward 2-0 win over Sweden in Chorzow.

The Poles, granted a bye to the final qualifying stage following the expulsion of Russia, led through Robert Lewandowski’s 49th-minute penalty before a 74th-minute effort from Piotr Zielinski sealed the deal.

Sadio Mane slotted the decisive penalty to send Senegal to the finals while his Liverpool team-mate Mohamed Salah suffered shoot-out heartbreak for Egypt.

The result was a repeat of the Africa Cup of Nations final two months ago when Mane again scored the winning penalty against the same opponents.

Senegal dominated most of the proceedings and Egypt were indebted to keeper Mohamed El Shenawy who produced a series of stunning saves to deny Pape Abdou Cisse and Ismaila Sarr in extra-time.

Salah blazed Egypt’s first penalty over the bar and after both sides contrived to miss their first four spot-kicks combined, it fell to Mane to seal his side’s passage to Qatar.

Thomas Partey’s early goal saw Ghana also qualify for the finals after a 1-1 draw with Nigeria in Abuja, which proved enough to send the Ghanaians through on the away goals rule.