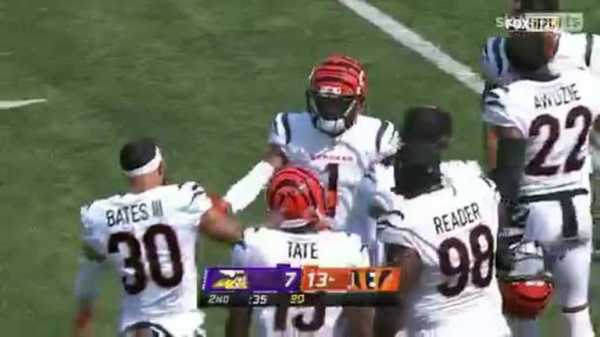 Cincinnati Bengals moved ahead of the Vikings with a Joe Burrow 50-yard TD to Ja’Marr Chase!

The Green Bay Packers scored only three points in their Week One defeat to the New Orleans Saints, which marked the lowest points total by any reigning MVP‘s first game of his subsequent season.

Saints quarterback Jameis Winston‘s 148 passing yards are the fewest in NFL history by any quarterback who threw at least five touchdown passes in a single game.

The Miami Dolphins‘ win over the New England Patriots saw two Alabama quarterbacks (Tua Tagovailoa and Mac Jones) starting against each other for the first time since Week 12 of the 1983 season when Richard Todd’s Jets defeated Ken Stabler’s Saints 31-28.

Ryan Fitzpatrick became the fifth different quarterback to start the season for Washington in the past five seasons after Kirk Cousins (2017), Alex Smith (2018), Case Keenum (2019) and Dwayne Haskins (2020). Before his injury, Fitzpatrick became the only QB in NFL history to start a season opener for at least six teams, having also done so for the Buffalo Bills, Texans, Jets, Buccaneers and Dolphins.

The Las Vegas Raiders’ overtime win over the Ravens was just the second time a Monday Night Football game has gone to overtime in Week One of an NFL season. The only other time was in 1979 when the Pittsburgh Steelers defeated the Patriots 16-13 and went on to win Super Bowl XIV later that season.

Sky Sports NFL is your dedicated channel for NFL coverage through the season – featuring a host of NFL Network programming. Don’t forget to follow us on skysports.com/nfl, our Twitter account @SkySportsNFL & Sky Sports – on the go!