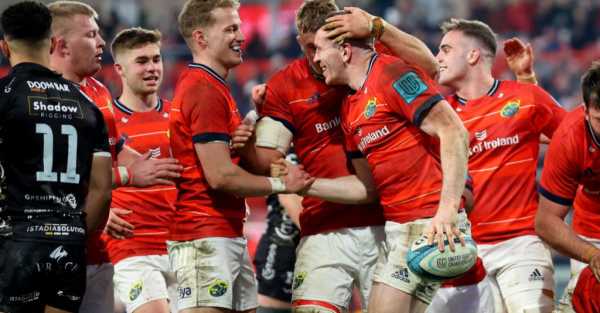 Munster left no stone unturned as they breezed past Dragons in Thomond Park on Saturday.

The game finished 64-3 to the home-side, with the Reds scoring at total of 10 tries throughout the game.

Craig Casey scored Munster’s first try after just 10 minutes, and they never looked back from there.

He scored a second try just 13 minutes later. However, Casey was not the only Munster player to get over the line twice. Jack O’Donoghue and Chris Cloete each scored a couple of tries.

Meanwhile, Simon Zebo, Chris Farrell, John Hodnett, and Shane Daly also got themselves on the score board with tries.

It was a hard watch from a Dragon’s prospective, as the visitors failed to show up.

Their only score came from a penalty in the first half.