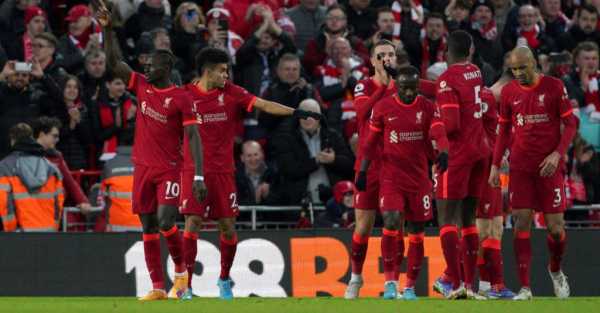 Sadio Mane scored the goal which saw Liverpool beat West Ham 1-0 but defender Trent Alexander-Arnold was the architect of a victory which reduced Manchester City’s gap at the top to three points.

The England right-back was the visitors’ tormentor-in-chief as his varied passing range in the attacking third was coupled with a brilliant goalline clearance to secure a ninth clean sheet in 13 appearances.

It meant West Ham’s former Everton boss David Moyes left Anfield without a win for the 18th time, a Premier League record for one manager at a single ground.

That was mainly down to the excellence of Alexander-Arnold, who with the pass for Mane’s 27th-minute goal equalled Steven Gerrard’s record of 16 assists in a single season and beat his own previous best from 2018-19 and 2019-20.

It was not the only time he cut through the visitors’ defence but equally important was his athletic effort to hook clear Pablo Fornals’ dinked effort over goalkeeper Alisson Becker just yards before it crossed the line.

Jurgen Klopp had restored his strongest team, with eight changes from the midweek FA Cup win over Norwich, to face a West Ham side weakened by the absence of England midfielder Declan Rice through illness.

Liverpool should have been ahead after just 68 seconds when Alexander-Arnold sent Mohamed Salah racing through and only the right knee of goalkeeper Lukasz Fabianski prevented an opening goal.

Salah was also off-target again after Luis Diaz’s effort was blocked by Craig Dawson before Alisson was tested twice by Michail Antonio, the first a fierce effort which had to be tipped over, either side of a low Tomas Soucek shot.

Then came the breakthrough for the hosts, with Mane’s close-range finish from Alexander-Arnold’s low cross judged to be onside by VAR.

An exhilarating run from Diaz from 20 yards inside his own half was cynically halted by Kurt Zouma, booed ceaselessly over his mistreatment of his cat last month, and Alexander-Arnold flicked the free-kick just wide.

Diaz was denied by Aaron Creswell’s goalline clearance as Alexander-Arnold continued to torment the West Ham defence with Salah’s follow-up charged down.

And not content with being the focal point of the attack Liverpool’s right-back proved his brilliance at the other end as he raced back to superbly clear off the line after Fornals had beaten the offside trap and Alisson.

Early in the second half a misjudgement by Virgil van Dijk, heading towards his own goal unsighted, put in Jarrod Bowen but this time Liverpool’s other full-back Andy Robertson came to the rescue as he made up considerable ground to put in the block.

It was the last action for the Hammers forward who had to be helped off the field shortly afterwards with an injury which looked likely to bring to an end his club-record run of 78 successive appearances, having just surpassed Steve Potts’ mark set in 1996.

Diaz and Salah (twice) both had chances to extend their lead before Klopp’s side had a huge escape when Manuel Lanzini side-stepped Alexander-Arnold’s challenge only to balloon a shot over from seven yards.

Midfielder Naby Keita was next to put in a crucial block as Antonio pulled the trigger after Liverpool were caught open at the back as West Ham enjoyed a strong finish to the game.

However, the hosts held on for a 12th successive victory – their best run since August 2006 – and a 600th in the Premier League, becoming the fourth club to reach that mark.

Having moved within one win of City, Liverpool will hope arch-rivals United can do them a favour in Sunday’s Manchester derby.