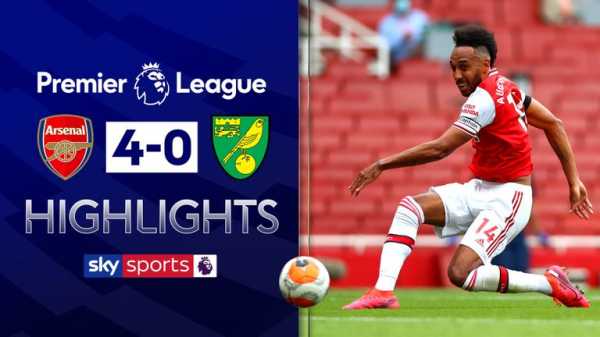 2:59 Highlights from Arsenal’s 4-0 win over Norwich

“I would still like to see it in a more consistent way, with more speed and more intent at times,” he continues. “But the structure is getting there, whether we are playing with one formation or another, and so is the flexibility, the rotation of positions, the movement and the patterns of play.

“There are some good signs.”

Those signs were not immediately apparent in the wake of Arsenal’s losses to Manchester City and Brighton following the restart. “It was difficult to handle, after three months of lockdown when the players were so willing, getting hit in the face straight away,” says Arteta.

“At Brighton, I think at moments we played really, really well. We completely dominated and should have gone two or three-nil up. But then we gave the opponent the game in seven minutes. We cannot accept that. But the response was really good. We can never fault the players’ effort, how much they are trying, it’s just about competing in certain moments.

“From then on, we needed another step in terms of commitment, of aggression, of willingness, of trying to be better, and we won three games in a row against very difficult sides.” 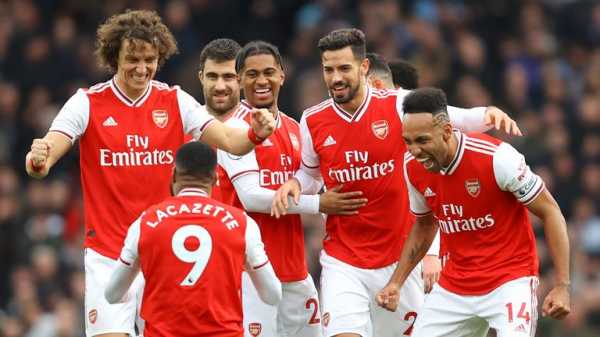 Arteta now wants to see the progress continue against Wolves on Saturday, where another victory is required if Arsenal are to keep their Champions League hopes alive. But Arteta knows his longer-term ambitions for the club are likely to depend on what happens during the summer.

He has already gone some way to shaping his side how he wants it, making the January loan signings of Cedric Soares and Pablo Mari permanent, extending David Luiz’s contract by a year, and, in the build-up to the Norwich game, tying the coveted Bukayo Saka to a new long-term deal.

But doubts remain over the future of Aubameyang – despite Arteta’s insistence that the 31-year-old is “willing to stay” at the Emirates Stadium – and the head coach is determined not only to keep his best players, but strengthen the squad with new recruits in the upcoming transfer window – regardless of the financial implications of the coronavirus crisis.

“I know that the situation that we have at the club and the context that we are in, but the club knows my plan,” he says.

“In January, the situation was that we had to fill some gaps and give some stability to the squad. Now is the moment to make another step forward and improve the squad and the players that we have.”

Some onlookers have voiced concerns about the club’s perceived dependence on certain agents, with Kia Joorabchian featuring prominently in many of their recent dealings. But Arteta’s answer is emphatic when asked if decisions over new signings ultimately rest on his approval. 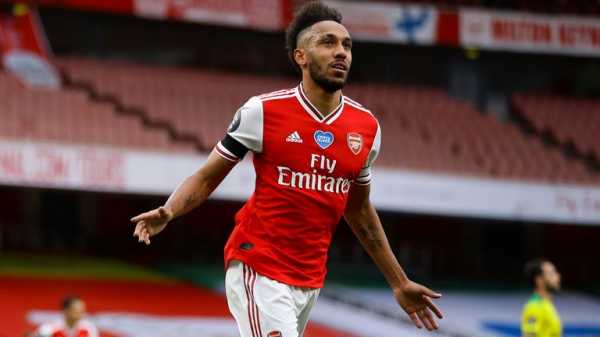 1:25 Arteta is confident that Pierre-Emerick Aubameyang will commit to the club

“Yes, absolutely,” he says. “We have a very strong group [working on signings] and the communication is really clear, not only with [head of football] Raul [Sanllehi], [managing director] Vinai [Venkatsham], [contract negotiator] Huss [Fahmy] and [technical director] Edu, but also with the ownership about where we want to go.”

It is, however, “vital” to Arsenal’s future, according to Arteta, that they get their next round of recruitment right this summer in order to build on the positives of his tenure so far.

“The margin for error is very, very small,” he says. “The gap between the two top teams and the rest is really, really big and everybody is trying to catch up. The competition is between six, seven, eight, maybe even nine clubs now to fight for those positions, so we have to be very smart and we have to be very decisive when we make our decisions.”

That decisiveness has certainly been apparent in the way in which Arteta has managed his squad. The 38-year-old demands maximum commitment from his players both on and off the pitch. Anyone who fails to fulfil what he calls the “non-negotiables” – Mesut Ozil and Matteo Guendouzi being the latest examples – swiftly finds himself out of favour. 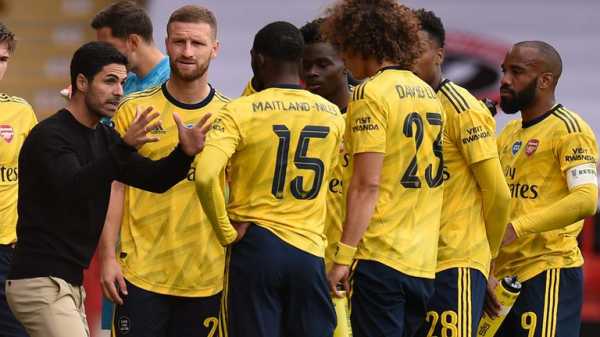 It is one of many lessons Arteta picked up during his time as assistant manager at Manchester City, where even the great Pep Guardiola needed to battle through a season of transition in order to successfully implement his philosophy and lay the foundations for their subsequent success.

“I learned then how important it is that everybody buys into what you are doing if you want to create something long-term,” says Arteta.

“We weren’t able to change what we had to change in the first season, but we were able to do that in the second season. We were very aggressive and suddenly everything clicked and everything changed.

“First you have to identify where you can get better, but then you need everyone to be willing and to make a big effort to do it, because the process can be very slow or it can be very quick. That depends on how strong you are in your decision-making, and whether someone is doubting because a few results don’t go their way, or whether they are even more aggressive, they can see what you are trying to do and they support you totally.” 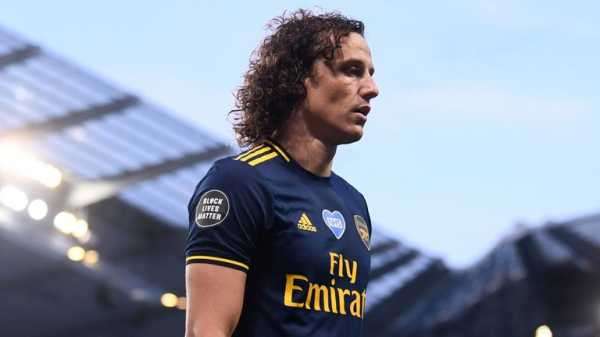 Arteta can only dream of the level of financial backing his old friend Guardiola received after that first season at Manchester City, of course, when the club spent close to £300m on new signings.

But efforts to improve the Arsenal squad are already underway behind the scenes and he is pleased by what they have been able to do so far – including agreeing a new contract for the much-criticised Luiz.

“His attitude and the way he has behaved with everybody at the club, not just in easy moments but in difficult moments, tells me everything about the person,” says Arteta. “He knows the role he has here. You can ask any player in the team how he is with his team-mates, what he brings to the table, and how willing he is to do well at this football club.

“He made a really difficult decision to leave Chelsea with two years left on his contract. It was a complicated decision to change clubs in London like that. But he felt it was the right move and that is the type of character he is. I will keep pushing him, keep trying to make him better and stop his weaknesses so that all the positive things he has can flourish.”

It was notable that Saka cited Luiz’s support as a key factor in his recent development when he signed his new Arsenal contract earlier this week, and Arteta expects the Brazilian to take the incoming William Saliba under his wing in much the same way next season.

Much is expected from the 19-year-old Saliba, who has spent this season on loan with boyhood club Saint-Etienne having agreed his £27m move to the Emirates Stadium last summer. But Arteta is wary of putting too much pressure on the centre-back’s young shoulders.

“I am excited to work with him but I am worried about the expectations because I know how difficult it is to play as a central defender in this country,” he says.

“It is one of the most complicated positions here. The step is really, really big. William had a really positive season last year, but he has had a really difficult one this year with injuries. We know where the potential is, but to fulfil that potential every three days at the highest level is a different task. 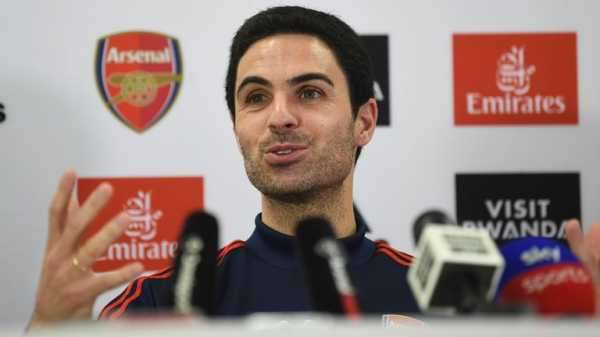 “He is, in my opinion, in phase one or two of his development. He has a lot of things to learn but hopefully, we can give him the right environment to make that process very quick.

“I know the player. He has the right mentality, the right attitude, the right physique. But he needs to fit in and that’s something nobody knows until the moment he lands in that dressing room.”

Overseeing Saliba’s development is just one of the many tasks facing Arteta as he bids to transform Arsenal and take them back to the level at which he feels they belong. It is a daunting undertaking and there will be more hurdles to come. But there seems little danger of his optimism waning.

“I am always very optimistic,” he says, smiling again. “I didn’t expect this many challenges in the first six months here, but it’s part of our job. There are always a lot of unexpected things that arise. We just have to try to solve them in the best possible way, be positive and move forward.”