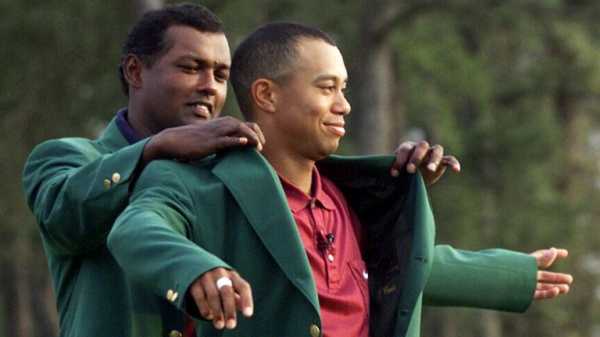 Already the defending champion at the US Open, Open Championship and PGA Championship, Woods sealed the ‘Tiger Slam’ of holding all four majors by claiming a two-shot victory in Georgia.

After an opening-round 70 left the American five adrift of early pacesetter Chris Di Marco, Woods followed a six-under 66 with back-to-back 68s to see off a final-day challenge from David Duval and Phil Mickelson.

Woods went into the back nine with a one-shot advantage but found himself alongside Duval at the top of the leaderboard with three holes to play.

A par at the 16th as Duval and Mickelson ran up bogeys restored Woods’ narrow cushion, before a birdie at the last confirmed golfing history.

“I don’t think I have ever accomplished anything this great,” Woods said afterwards. Will his achievement ever be matched again?

Watch The Masters exclusively live on Sky Sports’ dedicated channel – Sky Sports The Masters. Live coverage from the opening round begins on Thursday, April 8 from 2pm.