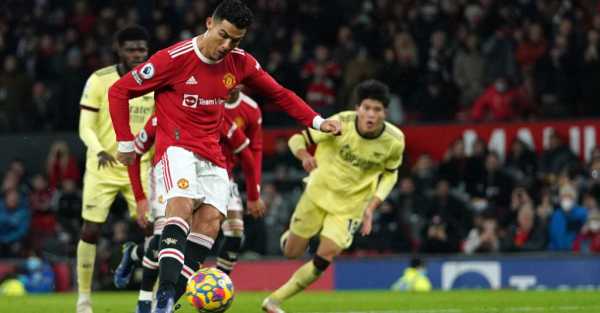 Across the current season and the previous three, the Red Devils have been given a penalty every 299 minutes – pipping Paris St Germain to top spot in England, France, Spain, Germany and Italy and 10th in the 31 European leagues surveyed overall by the CIES Football Observatory.

Here, the PA news agency looks at how the Old Trafford club compare to their Premier League rivals and the rest of the continent.

Liverpool manager Jurgen Klopp is among those to have drawn attention to United’s regular chances from the spot, claiming last season that the Red Devils “had more penalties in two years than I had in five and a half years”.

The CIES study will give him a fresh piece of evidence to point to, with United awarded penalties almost once every three league games since the start of the 2018-19 campaign – almost twice as often as Liverpool.

United are the only English club in the top 20 from the big five leagues, with nearest domestic challengers Chelsea 24th in that regard and 92nd in the study as a whole with one penalty every 419 minutes.

Manchester City (434) and Leicester (440) rank next among current Premier League clubs, with a big gap then to Liverpool and Crystal Palace with one spot-kick every 574 minutes – almost six and a half games.

At the other end of the scale, Newcastle and Wolves each have to wait an average of 998 minutes – just over 11 games – for a spot-kick chance to come along, but spare a though most of all for Burnley.

The Clarets have had only eight penalties in the three and a half seasons covered, one every 1,474 minutes or just over 16 games. On the plus side, Sean Dyche’s side have scored all eight.

The Championship is also among the 31 leagues included and Bristol City’s astonishing average of 1,834 minutes between penalties – more than 20 games – is the highest in the study. Burnley rank third worst with the pair separated only by Israel’s Hapoel Hadera.

PSG are just behind United with a penalty every 305 minutes as Ligue 1 and Serie A dominate the picture in the big five leagues.

Lazio and Inter Milan, at 315 minutes apiece, and AC Milan and Juventus at 324 are next up with French sides Lyon, Lille, Lens and Monaco completing the top 10.

Real Sociedad are the top Spanish side while Borussia Monchengladbach and Leipzig lead the Bundesliga figures with one penalty every 397 minutes. In all there are eight French, eight Italian, four Spanish and two German sides between United and Chelsea.

The study, powered by data from InStat, also demonstrates another measure of United’s penalty luck.

One in every 21 ‘big chances’ for United ends in a penalty – of the top 20 in the study from the big five leagues, only Genoa (18), Sampdoria and Metz (both 20) boast lower figures. Panathinaikos (15) come out on top overall.

Across all European leagues, Serbian side Red Star Belgrade lead the way with a penalty every 239 minutes, averaging 17 minutes fewer than second-placed Dynamo Kiev. PAOK, Slavia Prague, Galatasaray, Porto, Steaua Bucharest, Sporting Lisbon and Shakhtar Donetsk are the other sides ahead of United.