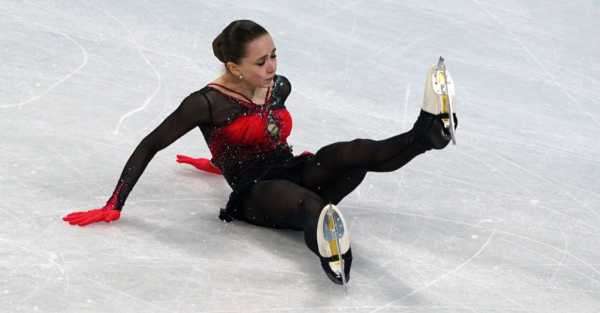 Nine days after being notified of a failed drugs test, 15-year-old Kamila Valieva finally fell apart in front of the watching world on Thursday night, finishing out of the medals following a dramatic Olympic women’s free skate.

On another evening of unforgettable drama at the Capital Indoor Arena, Valieva, who started with a two-point advantage after Tuesday’s program, fell twice and suffered a series of further errors to plunge to fifth place in the final standings.

Gold went to her Russian compatriot, 17-year-old Anna Shcherbakova, for a season’s best 175.75, taking her to a total of 255.95, just over four points clear of the third member of Eteri Tutberidze’s controversial Sambo-17 club, whose programme included no fewer than five quad jumps.

Kaori Sakamoto hung on to bronze and in a further twist, Valieva’s drop out of contention meant a flower ceremony – and subsequently Friday’s medal ceremony – could take place as originally scheduled.

Valieva, who had shown only a few signs of pressure during her short program, struggled to maintain her composure after falling on her first triple. She left the ice in tears, and was consoled by Tutberidze after the scores were announced.

All the talk of asterisks being applied to the Olympic record, and of medals being retrospectively sent by post, were rendered irrelevant in just under four minutes of drama on the ice.

Valieva had been the focus of extraordinary attention since her positive test was revealed last Tuesday, one day after the conclusion of the team event. Her automatic provisional suspension was lifted by the Russian Anti-Doping Agency, whose decision was effectively upheld by CAS despite an appeal led by the International Testing Agency.

A number of athletes and former athletes, including direct rivals of Valieva, had questioned her right to remain in the competition or the perceived unfairness of allowing her compete in spite of her positive sample.

That sense of injustice was lent more oxygen following a report in the New York Times on Wednesday that Valieva’s sample contained not only trimetazidine but two other legal heart medications, Hypoxen and L-Carnitine, which the Russian’s team even listed on her doping control form.

The Russians claimed Valieva may have tested positive for a micro-dose of the banned substance because she shared a drinking cup with her grandfather, who is prescribed the medicine.