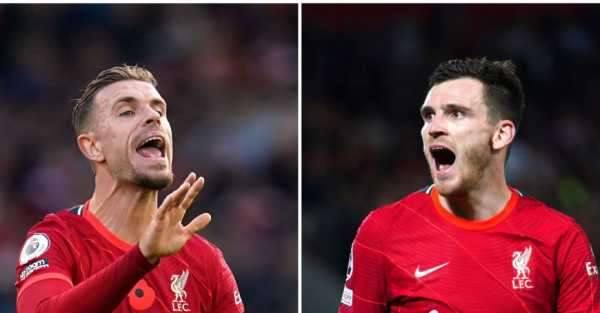 Liverpool manager Jurgen Klopp is optimistic Jordan Henderson and Andy Robertson will be fit for the visit of Arsenal.

Henderson returned home early after sustaining a minor injury in England’s World Cup qualifier against Albania on Friday, while Robertson was forced off in Scotland’s win over Denmark on Monday this week.

However, Klopp believes they will be in contention for Saturday’s evening kick-off.

“Robbo was lucky, we can probably say. It was a little bit DOMS (delayed onset muscle soreness), the intensity of all the games he played probably, rather than anything else,” Klopp told the club’s website.

“He was smart enough to (make) the right decision, he went off early, which he usually is not doing but in this case it was absolutely right, and so there’s a good chance that he can be involved at the weekend.

“Hendo, a little bit more (injured) than Robbo, but a chance for the weekend so we are working on that.

“It’s not a serious injury but in this short period of time we have to see if he is ready for Saturday, but after that, 100 per cent, and possibly for Arsenal as well.”

Sadio Mane has been passed fit having joined in full training this week after returning from Senegal duty with bruised ribs, while fellow forward Divock Origi will be assessed after sustaining a dead leg playing for Belgium.

Midfielders Naby Keita and James Milner (both hamstring) will not be ready for the weekend but could potentially feature in the Champions League at home to Porto next week.

“Sadio is fine – painful but fine. Everybody who had a rib bruise knows it’s an annoying thing. But Sad trained here with us now in all sessions,” added Klopp.

“Naby and James are in a good way as well, getting closer. Probably next week we expect them being back in team training, let’s see what that means for the Porto game – but not for the weekend, they are not available.”