Jack Conan and Dan Leavy both come into the squad in place of CJ Stander and the injured Josh van der Flier.

20-year-old Jordan Larmour looks to be in line to make his international debut from the bench having been named among the substitutes.

The other changes are in the tight five with Jack McGrath starting at loose-head and Cian Healy dropping to the bench. Devin Toner returns to the second-row in the plack of James Ryan, who doesn’t feature in the match day squad.

Captain Rory Best and Tadhg Furlong join McGrath in the front row with Iain Henderson partnering Toner behind them.

Best will draw level with Paul O’Connell as Ireland’s third-most capped player of all time, on 108 Test appearances.

Peter O’Mahony joins Leavy and Conan to make up the back-row.

Schmidt has gone with the same back-line that started in Paris last weekend meaning Conor Murray and Johnny Sexton continue as half-backs.

Bundee Aki and Robbie Henshaw continue their partnership in the centre with Jacob Stockdale, Kieth Earls and Rob Kearney making up the back three.

Quinn Roux has been called up to the bench to cover second-row joining the uncapped Larmour. The rest of the replacements are made up of Sean Cronin, Cian Healy, Andrew Porter, CJ Stander, Kieran Marmion and Joey Carbery. 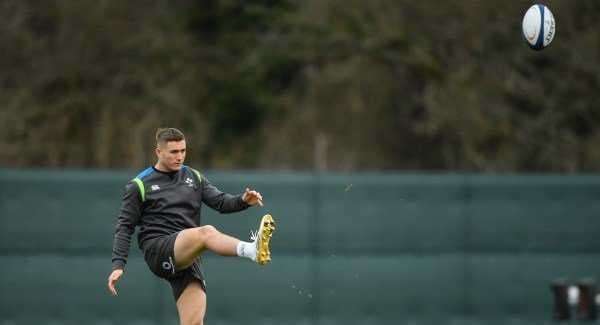 Ireland boss Schmidt insisted potential debutant Larmour will not need his hand held if he joins the fray.

“I expect Jordan to provide what he’s been providing in the provincial matches so far, that raw acceleration and the ability to beat players,” said Schmidt, of Larmour.

“And without the ball he wants to make a big contribution too. It’s a good situation that he could potentially slot in around experienced players, but at the same time, you don’t place a player and expect them to be looked after.

“He has an expectation that he’ll look after himself and look after what he needs to do and bring those exciting elements I talked about to the game.”

Sexton played the full 83 minutes in Ireland’s dramatic win over France last weekend, kicking a drop goal at the death to Schmidt’s side the win.

“One of the great things about the Six Nations at the moment is that it’s played over seven weeks,” said Schmidt.

“If Johnny didn’t star this week and didn’t play next weekend, then he would have two weekends when he wouldn’t have played.

“So would that have been the best preparation for the next game? That’s what you’re always balancing.