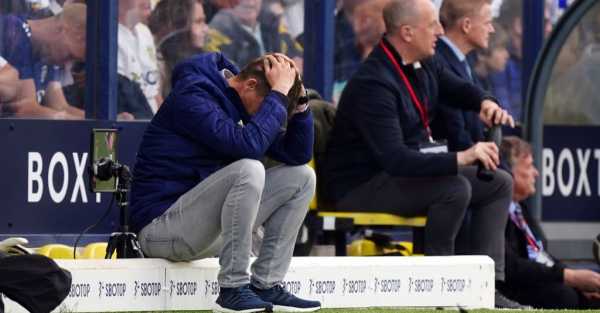 Leeds boss Jesse Marsch admitted his players were not giving themselves a chance after defeat to Chelsea nudged them closer to the Premier League’s trapdoor.

For the second game running against a top-four opponent, Leeds lost their heads in the heat of their relegation battle as they played of most of the match with 10 men.

Dan James was shown a straight red card against Chelsea for his reckless first-half challenge on Mateo Kovacic after Mason Mount had given the visitors an early lead.

Second-half goals from Christian Pulisic and Romelu Lukaku sent Leeds spinning to a third straight defeat, which left them in the bottom three with two games to play.

Marsch, who saw skipper Luke Ayling sent off in similar circumstances in Sunday’s defeat at Arsenal, said: “The guys are gutted because we’re not giving ourselves the chances we want to come into the match. That part hurts.

“In general, if you go down to the performances, it’s not that they’ve been great, but it hasn’t been horrible.

“It’s just the level of the opponents and playing with a man down for 60 minutes in two matches limits your ability to win the game.”

Leeds have two matches to salvage a wretched season – against Brighton at home on Sunday and at Brentford on the final day – and will be without Ayling and James for both.

Marsch was asked if he had seen enough quality in his team in successive defeats to Manchester City, Arsenal and Chelsea to suggest Leeds can still stay up.

“You’re talking about City, Arsenal and Chelsea, three of the best teams right now in the league,” the American said. “No matter what, these games were going to be a massive challenge.

“The frustrating part is that we’re losing players in the process, which hurts our ability to recover and compete in the next match.

“That’s the part that makes it most difficult. We knew how good these opponents were.”

Chelsea had dropped 10 points from their previous five matches, but got their Champions League hopes back on track and returned to form in time for Saturday’s FA Cup final against Liverpool.

Boss Thomas Tuchel was particularly pleased for Romelu Lukaku, who was almost withdrawn as a precaution before he notched his side’s third goal.

Tuchel said: “It’s always the right time to find rhythm. I’m happy he scored again and he wanted to stay on the pitch to get his goal.

“I’m happy as well for Puli (Christian Pulisic) and Mason (Mount) that we were decisive with the offensive players. This is important for them because it gives them confidence.”

Lukaku was a major threat all game against Leeds and Tuchel was delighted the Belgium striker got his reward.

“We asked him how he felt because after 75 minutes, for a more heavy player with a big physical input after two matches, maybe it was good to go out,” Tuchel added.

“But I was aware he did not have his goal. Puli and Mason already scored, so we left him on the pitch to try to get his goal and we’re happy with how that worked.”