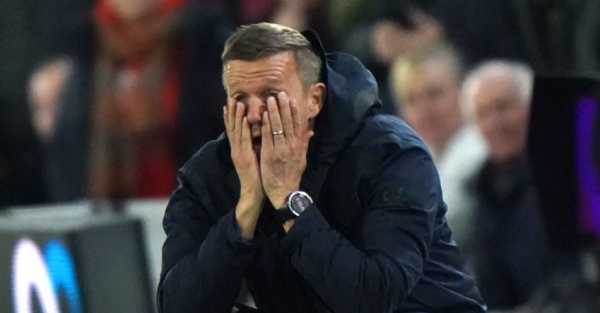 Leeds head coach Jesse Marsch could resist the clamour to recall Patrick Bamford to his starting line-up against relegation-rivals Norwich.

Marsch’s side resume their survival bid in Sunday’s crunch clash at Elland Road against the Premier League’s basement club.

Bamford ended his three-month injury lay-off as a substitute in Thursday’s 3-0 defeat to Aston Villa, but Marsch insisted he would not bow to pressure if his leading striker was not yet ready for 90 minutes.

Marsch said: “Yeah, I think we all know how important the game is on Sunday, but we also have to be very calculated, observe how he is and make a very educated decision on what we think is best for him.

“I would say he’s looked great this week, really well, and we can be optimistic. But we also have to be intelligent and find a way to get to the core of what the right decision is.”

Leeds slipped closer to the top-flight trapdoor with a club record-equalling sixth-successive league defeat on Thursday.

Marsch has lost his first two games in charge since replacing Marcelo Bielsa at the end of last month and has only 10 left to rescue Leeds’ season.

The 48-year-old American inadvertently brought the size of his task into sharp focus when asked after the defeat to Villa if he had been in a similar position during his managerial career.

He said: “My first job. We were an expansion team in Montreal. It was a totally new group and a lot of new ideas and we really had to stick to the plan and work really hard and believe in the process.

“Towards the end of the season we went through a phase where we were really good. That was six months. (Here) I have six days.

Leeds sacked the hugely-popular Bielsa for steadfastly refusing to alter his tactics after a series of heavy defeats.

There was clear improvement in Marsch’s first game in charge – a 1-0 defeat at Leicester – but against Villa, Leeds appeared lost and turned in their worst display since Bielsa led them to promotion two seasons ago.

When quizzed about his players’ fragile confidence, he said: “You’re right, but this is a business for men.

“We need to know that it’s a difficult situation, but we’re not getting out of it by hiding or being afraid.”

Leeds are still without Kalvin Phillips and skipper Liam Cooper (hamstring), while both Junior Firpo (knee) and Tyler Roberts (hamstring) have been added to the injury list.