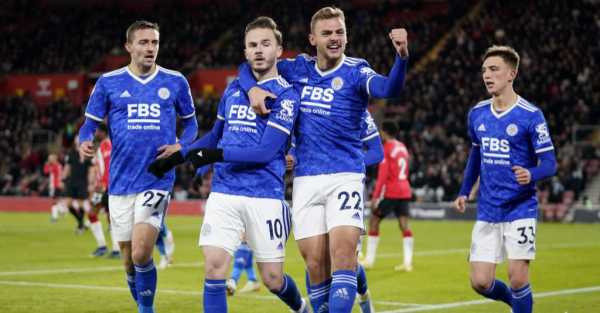 James Maddison scored for the third successive game as Leicester twice came from behind to salvage a 2-2 Premier League draw at Southampton.

In-form Maddison conjured a moment of magic early in the second period but the Foxes squandered golden chances to complete a comeback success on the south coast.

Jamie Vardy blazed over when through on goal, while Harvey Barnes was denied by a fine save from home goalkeeper Alex McCarthy.

Brendan Rodgers’ men have fallen agonisingly short of Champions League qualification in the past two seasons and cracking the top four this term already looks a tall order.

A point at St Mary’s was sufficient to move to eighth but left them with just one win from five as their inconsistent form continued.

Southampton, meanwhile, hold a five-point buffer on the relegation zone after scoring more than once in a top-flight fixture for only the third time this campaign.

Saints boss Ralph Hasenhuttl reacted to Saturday’s 4-0 thrashing at Liverpool by recalling Kyle Walker-Peters, Nathan Tella and Nathan Redmond, while the visitors stuck with an unchanged 20-man squad following a 4-2 win over Watford.

Leicester fans were back at the ground for the first time since a record-breaking 9-0 win in October 2019 and took little time to mock the hosts.

But chants of ‘Who put the ball in Southampton’s net? Half the f****** team did’ were silenced inside three minutes.

Leicester were not behind for long and their 22nd-minute equaliser had hallmarks of the opener.

This time Saints keeper McCarthy could not keep hold of a stinging shot from Wilfred Ndidi following good wing play from Maddison and Evans thumped home the loose ball. The emphatic finish was the defender’s first goal since equalising in a 1-1 draw here in April.

Southampton regained the lead 11 minutes before the break, benefiting from some incredibly slack Leicester defending.

Following a partially-cleared corner, Redmond was given time to pick out a cross from the right and the unmarked Adams sent a diving header into the far corner from just outside the six-yard box.

Kick-off for the second half was delayed by around 15 minutes after a fan required medical treatment in the Kingsland Stand.

Saints had a golden chance to double their advantage less than a minute after the restart when the unmarked Tella headed high and wide after being picked out by Ward-Prowse.

The creative midfielder collected the ball from Luke Thomas inside Southampton’s crowded 18-yard box and expertly cut inside the sliding Tino Livramento before lashing past McCarthy at the near post.

Leicester should probably have gone on to take all three points but were denied by a combination of exceptional goalkeeping and uncharacteristic profligacy.

Firstly, McCarthy somehow kept his side level by superbly tipping wide from Barnes in the 71st minute, although a possible handball in the build up may have ruled it out anyway.

Vardy should then have won it with 15 minutes to go. The Foxes talisman was sent clear after a Walker-Peters back pass clipped team-mate Salisu but, with most inside the ground waiting for the net to bulge, the former England man smashed over.